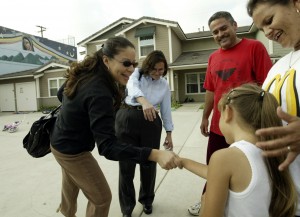 Today, Arciniega is one of the ALRB’s top staff attorneys. And with the recent shakeups in the ALRB general counsel’s office that resulted in the sackings and sudden resignations of top lawyers, people are wondering why Arciniega remains on the job.

The lawyer has come a long way since getting her law degree as an “apprentice” of longtime UFW lawyer Barbara Macri-Ortiz, who in fact calls Arciniega “my apprentice.”

State law requires all ALRB personnel to be worker advocates with no partiality for or against either employers or unions. Arciniega is anything but objective. Her title at the UFW was “lead organizer.” The Militant, published by the Socialist Workers Party, reports Arciniega being a UFW boycott leader as far back as 2000.

In Oxnard more than a decade ago, the Los Angeles Times profiled Arciniega under the headline, “Apprentices Take Law Into Their Own Hands.”

“Photos of a defiant Cesar Chavez line the walls. A weathered packing crate, a keepsake from one of the United Farm Workers’ first table-grape contracts, sits on a bookshelf flaunting its Aztec eagle label,” the Times reported in October, 2004. “It is here, in a home office near Oxnard’s agricultural heartland, that Jessica Arciniega has come to learn the law.”

Instead of going to law school, Arciniega went through the UFW’s legal apprentice program under UFW attorney Barbara Macri-Ortiz. California is one of the few states that allows law students to study as apprentices, rather than going to law school. The UFW gave Arciniega her legal education and her law degree. Her mentor, Macri-Ortiz, also apprenticed at the UFW, receiving a law degree signed by UFW leader Cesar Chavez and spending 20 years working for the union. Both Arciniega and Macri-Ortiz were given awards by Women Lawyers of Ventura County in 2010.

In 2012, ALRB’s new general counsel, Sylvia Torres-Guillen, hired Arciniega among several union activists to expand the ALRB legal staff to go after farmers. One of the activist lawyers, Silas Shawver, became Regional Director of ALRB office in Visalia. Another, Alegria de la Cruz, was hired as a lawyer in Torres-Guillen’s office. A third was Jessica Arciniega, named Regional Director of the ALRB office in Oxnard. 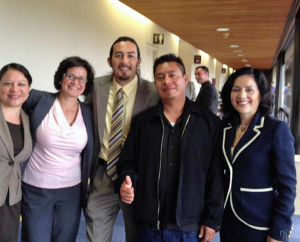 Governor Jerry Brown quietly removed Torres-Guillen from the top lawyer’s job at the ALRB in June, the day of the ALRB’s 40th anniversary gala celebration, and brought her in to his office as general counsel. Shawver followed her out after a bitterly controversial tenure, and took a job at the Department of Fair Employment and Housing. Another ALRB lawyer, Alegria de la Cruz, also recently stepped down from the ALRB legal staff as well.

Now, farm workers and growers say it’s time for Arciniega to leave the ALRB, so the board can recover its lost credibility.

In the United States, it is the right of every person to earn an honest living and compete freely without unreasonable government interference. But in California, farm workers have been harassed for several years by a government agency in cahoots with the UFW labor union.

Jessica Arciniega won notoriety at ALRB when she supervised the November, 2013 farmworker vote at Gerawan Farming in the San Joaquin Valley. At issue was the reappearance of the United Farm Workers labor union in 2012, after a nearly 20-year absence, in which the union tried to force a contract on the workers. Farmworkers collected thousands of petitions to request that the ALRB supervise a vote to de-certify the UFW as their representative, since the workers were already earning among the highest wages in the industry without union representation. But ALRB Regional Director Shawver refused to allow the election.

After a second round of signature gathering for a new petition, the ALRB board overruled the general counsel’s office and ordered the election to finally take place on November 5, 2013. Arciniega and Shawver were the principal on-the-ground supervisors of the voting. Workers report that Arciniega compelled workers to show government-issued photo IDs in violation of the rules of procedure, and intimidated workers believed to favor decertification of the UFW. Arciniega “interviewed” workers during the vote to de-certify the UFW in a way that the workers say was intimidating. Several workers wrote sworn affidavits stating that they saw Arciniega and other ALRB attorneys and staff permitting irregularities in voting and asking confusing or intimidating questions that were interpreted as discouraging workers from voting. 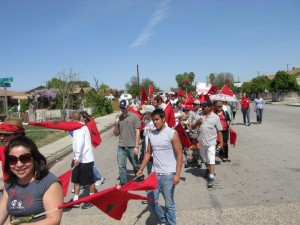 Citing unspecified and unsubstantiated irregularities on the part of the employer, Gerawan Farming, Shawver impounded the workers’ ballots and stored them in a safe at his office in Visalia. Arciniega supported the impoundment. No irregularities were ever proven, but the ballots still remain impounded, and have never been counted.

Law students and attorneys seeking jobs with the ALRB had to go through Arciniega, who acted as gatekeeper for anyone seeking a career in the general counsel’s office.

“My apprentice is a regional attorney for the ALRB here in Oxnard,” longtime UFW lawyer Macri-Ortiz says in a video interview about Arciniega.

While a public servant attorney on the ALRB, Arciniega maintained social networking with her union friends. Her Facebook page shows her carrying a red banner and leading a UFW protest in Delano in 2010. Arciniega remained Facebook friends with UFW Vice President Armando Elenes.

Arciniega is shown in another photo (above) with de la Cruz and Torres Guillen, with their arms around UFW General Counsel Mario Martinez and another UFW organizer giving a celebratory thumbs-up. This lack of both legal professionalism among civil servants, and an institutional bias toward the UFW within the ALRB general counsel’s office, contributed to the sacking of Torres Guillen and Shawver earlier this summer.

But Arciniega remains, calling into question the ALRB’s commitment to the impartiality of the board – and the legacy of its chairman, William B. Gould IV.

See the dozens of stories about Gerawan Farming workers, the UFW and ALRB HERE.