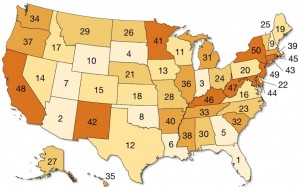 Freest States: This Map Shows Americans Where to Go If You Crave Liberty

According to the John Locke Foundation, freedom is based on fiscal policy, which measures taxes and budgetary measures, and generates 50 percent of a state’s score.  Twenty percent each goes to education and to regulatory policies, and 10 percent to health care policy.

The ‘least free’ state according to the John Locke Foundation is New York, closely followed by California, then New Jersey, West Virginia, and Kentucky.

This would explain why California has a record number of residents who left the Golden State for other states during the last decade, according to new tax return data from the Internal Revenue Service. “About 5 million Californians left between 2004 and 2013,” the Sacramento Bee reported. “Roughly 3.9 million people came here from other states during that period, for a net population loss of more than 1 million people.”

The IRS said this also resulted in a net loss of nearly $26 billion in annual income.

Along with about 600,000 California residents who left for Texas, California also has lost more than 650,000 manufacturing jobs.

California has the greatest number of overpriced cities.

Yet Democrats, California’s ruling Party, continue to pass wicked regulatory laws which skyrocket the cost of housing, food, gasoline and transportation to such heights, the poorest are hurt the most.

California’s high cost of living is inflated by the strictest, most burdensome government regulations.

High housing prices are driven by inclusionary housing ordinances that require developers to set aside and price a certain percentage of new rental units at below-market rates. Add unworkable strict building codes to the inclusionary housing ordinances, and it’s the state government making it difficult to build enough housing in the state. This in turn leaves the housing market unable to meet demand, which drives prices higher.

Rather than allow the market to dictate what kind of housing people want and need, the state forces builders to provide affordable housing units at regulated rents, solely to obtain project approval. This is how business is done in California — hostile and punitive.

I am spending more on food today, than when my son and all of his hungry friends were still in high school eight years ago. And I don’t eat meat!

California egg prices are up more than 150 percent since last year. The average price for a dozen eggs is $3.69. But many stores are charging more than $5.00 for a dozen now. Californians can thank the state’s Democrats once again, for enacting Proposition 2, which now requires egg-producing chickens to be “free-range.” The absurd law, aggressively pushed by liberal elites within the state’s high-priced urban centers, requires that farmers provide hens double the roaming area they once had, resulting in fewer egg farms, and much higher costs to California’s egg eaters. The egg used to be one of the most cost-effective, inexpensive and healthy meals; not so in the Golden State.

“According the USDA’s Pacific Region Poultry Report released this week, California chickens produced about 311 million eggs in April, down nine million from March and down 78 million from April 2014,” the Los Angeles Times reported. “The number of laying hens was about 13 million, down from 16.7 million at this time last year.” 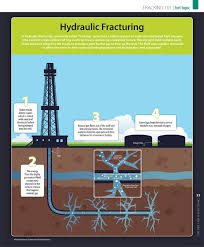 The national average gallon of gas costs drivers $2.76 a gallon. In California, drivers pay $3.88… and higher.

Democrats recently tried to raise the gas tax by 12 cents a gallon, and add $65 to the vehicle licensing fee, but could not get enough votes to pass either measure. (There is a God, and surely he drives a SUV)

Refiners in California are required to comply with the California Air Resources Board’s cleaner-burning gasoline mandate, at a cost to them of about $5 billion, according to the Western States Petroleum Association.

In most of the decade prior to 2015, gasoline prices in California averaged 31 cents a gallon more than the national average, the Los Angeles Times recently reported. But pricing fluctuations have reached as high as an additional 81 cents a gallon, largely because of regulations.

WSPA attributes the added cost to regulations imposed by the Air Resources Board and other government agencies.

It’s ironic that as Gov. Jerry Brown and his wife are getting ready to move into a newly renovated governor’s mansion, welfare in California is multiplying.

California shells out $52.3 billion in welfare – more than one-third of the entire state budget. Welfare, which is made up of government programs which provide financial aid to individuals who cannot support themselves. Funded by taxpayers, welfare in California includes Medi-Cal, Cal-Works, housing, childcare, food stamps (CalFresh), in-home services, and immigration.