A stunning vote occurred at the October 20, 2015 meeting of the elected governing board of the Grossmont-Cuyamaca Community College District, located in the eastern suburbs of San Diego (“East County”). To the dismay and outrage of construction union officials anticipating a 4-1 victory, the board voted 3-2 to table a motion to negotiate a Project Labor Agreement with unions until the college consulted with its independent citizens’ bond oversight committee.

Although the vote was a temporary setback for construction unions, its greater significance was its endorsement for a concept of taxpayer protection in California under duress in recent years. Three college board members, two of whom solidly supported a union Project Labor Agreement, declared publicly that their citizens’ bond oversight committee was valuable and important.

In November 2000, California voters heeded the pleas of a huge coalition of powerful interest groups and enacted Proposition 39. This statewide ballot measure changed the California Constitution by reducing the percentage threshold needed for voters to approve K-12 school and community college bond measures.

The new threshold was 55%, a reduction from the two-thirds (66.7%) supermajority established in 1986 through Proposition 46. (The original Proposition 13, the famous tax limitation constitutional amendment enacted by voters in 1978, outright prohibited school and college districts from borrowing money for facility construction by selling bonds.)

The main opposition to Proposition 39 was the Howard Jarvis Taxpayers Association. Earlier in 2000, this group played a leading role in defeating Proposition 46, which would have dropped the approval threshold for educational facility bond measures from two-thirds to a simple majority of 50% plus one vote.

Organizations eager to ensure easy approval of school and community college bond measures had to figure out how to outmaneuver the Howard Jarvis Taxpayers Association and convince voters to undermine Proposition 13 and help the children. One strategy was to enact provisions that would help protect taxpayers from the most frequently cited abuses of bond measures in the 1990s, including the diversion of bond proceeds for faculty and administrator compensation.

To improve the prospects for passage of Proposition 39, Governor Gray Davis signed Assembly Bill 1908, passed by the Democrat-controlled legislature. In addition to setting tax and debt limits for school and college districts when selling bonds, AB 1908 required these districts to establish an independent citizens’ bond oversight committee. This committee would monitor how educational districts spent the money that voters authorized to borrow under the 55% threshold.

The taxpayer protection strategy worked well enough to get 53% of voters to enact Proposition 39. Passage of school and community college bond measures subsequently exploded. From 1987 to 2000, voters had approved 55% of bond measures under the two-thirds threshold (516 out of 942). But from 2001 through 2014, voters approved 83% of bond measures that qualified under the 55% threshold (857 out of 1037).

Resentment of the bond oversight committee mandate was inevitable. Independent oversight can result in unwanted meddling from well-meaning but excessively fastidious citizens. It can undermine district public relations programs. It can taint the reputation of elected officials and district administrators. And it can expose irresponsible, inappropriate, and illegal schemes that insiders don’t want exposed.

In recent years, some school and college districts – often spurred by hired lawyers and financial advisors – have tried to confine the authority of citizens’ bond oversight committees to a rigid and narrow role of simply approving state-mandated reports at an annual meeting. Other districts appear to manipulate the selection process so that no one on the committee will cause trouble by acting independently. Some school and college districts outright ignore state laws concerning bond oversight committees, and no one seems to notice or care.

In the mid-2000s, members of citizens’  bond oversight committees at several school and college districts overwhelmingly recommended against their district boards entering into Project Labor Agreements with construction trade unions. This independent perspective, free of the influence of campaign contributions, helped to derail some proposed union deals.

Union lobbyists and lawyers recognized a threat. They began pushing elected officials to get their districts’ legal counsels to declare that bond oversight committees did not have authority under state law to comment on Project Labor Agreements.

A Liberal, Pro-Union College Board Defies the Trend

On October 20, after a workshop and public comment at a raucous meeting packed with hundreds of people from union and non-union construction factions, the board of the Grossmont-Cuyamaca Community College District prepared to vote on negotiating a Project Labor Agreement with unions for construction funded by a $398 million bond measure. The proposal was especially controversial because the resolution for the Measure V bond measure included a provision that required “fair and open competition” in bidding and prohibited discrimination based on union or non-union worker affiliation. 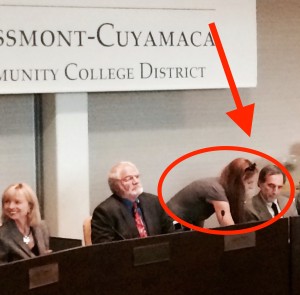 Board member Edwin Ramon Hiel is served with his recall papers during the Project Labor Agreement workshop.

The first two board members to speak (Mary Kay Rosinski and Debbie Justeson) stridently declared their support for unionism and the Project Labor Agreement. A third board member, Edwin Ramon Hiel, who had been served with recall papers at the meeting, then expressed support for the Project Labor Agreement. Union activists cheered with this confirmation that they would get control of district construction work.

Then a fourth board member, Greg Barr, began his remarks by declaring his 30-year union membership and his failure to understand why any worker would not want to be in a union. The already-agitated crowd erupted with loud cheers and jeers. It was obvious why six uniformed officers from the San Diego County Sheriff’s office were present at the meeting.

But then that same board member called for the board to table the vote until the college district’s Measure V Citizens’ Bond Oversight Committee evaluated the Project Labor Agreement. This stunned the crowd.

During the workshop earlier in the day, the chair of the Citizens’ Bond Oversight Committee at the Sweetwater Union High School District (in Chula Vista) told the board that his oversight committee was ignored when that district proceeded a few weeks earlier with its Project Labor Agreement. He urged the community college district board to give their own bond oversight committee a chance to evaluate and report on the issue.

Then the chair of the Measure V Citizens’ Bond Oversight Committee at Grossmont-Cuyamaca Community College District pointed out to the board that their own committee had not been consulted. She asked the board to let the committee consider the issue before it proceeded with the vote.

Apparently some of the board had listened to these comments and taken them into account. On a 3-2 vote, the board voted to table the vote on the Project Labor Agreement until the college district’s Citizens’ Bond Oversight Committee considered the proposal. (The two votes against oversight committee input were Rosinski and Justeson.) A union official rushed to the podium to launch a profane tirade against the betrayers.

In the end, taxpayers will lose when the board of the Grossmont-Cuyamaca Community College District eventually votes for the Project Labor Agreement. Only recalls and other elections will change that outcome. But taxpayers also achieved a victory when a majority of this board declared that the perspective of their Citizens’ Bond Oversight Committees is important.