House Amendment 1 to HR 2029,  Omnibus Spending Act, is the 2,000-plus page $1.15 trillion spending act to fund the government through September 30, 2016.  Congressman Tom McClintock voted NO, and explains why.

“A bill of this complexity always has good and bad provisions, and the question comes down to whether in balance it moves the government in the right direction,” Rep. Tom McClintock, R-CA posted on his Congressional website Friday.

On the plus side:
•    It stops bailouts of insurance companies required by Obamacare.
•    It ends the oil-export ban on American petroleum. (Although it should be noted that the president has the authority to do so on his own, and in 13 months we are likely to have a president who will anyway).
•    It blocks the proposed IRS rule that would formalize the harassment of Americans because of their political views.
•    It extends the victims compensation fund for 9/11 responders.
•    It provides major increases in defense spending.
•    It requires all travelers entering the United States who recently visited such rogue states as Syria and Iran to obtain visas, notwithstanding the Visa Waiver Program.

These features have to be balanced against some decidedly negative features including:

•    It increases taxpayer support of the International Monetary Fund which bails out irresponsible foreign governments like Greece.
•    It funds a wide variety of highly objectionable Obama policies, including the EPA’s Waters of the U.S. initiative that asserts EPA control over all waters in the United States; the illegal Obama executive orders on amnesty; the terrorist-friendly admission of poorly vetted Syrian refugees and support of Planned Parenthood’s barbaric practices.
•    It QUADRUPLES the H-2B visas for foreign workers from 66,000 to 250,000, taking American jobs and depressing American wages.
•    It funds the administration’s war on coal, making it virtually impossible for coal-generated electricity to continue.
•    It reauthorizes the Land and Water Conservation Fund, which is used to increase federal land holdings.
•    It provides for massive increases in solar and wind tax subsidies.
•    It delays the Obamacare “Cadillac Tax,” which primarily benefits labor unions – reducing Obamacare revenues without reducing Obamacare costs and in essence shifting funding of the program from the unions to the taxpayers.

“But for me, the real issue involves the damage “the Omnibus” does to the overall spending trajectory of the federal budget.  The Congressional Budget Office projects that within eight years, interest on the federal debt will exceed the entire defense budget.  At that point, the ability of the federal government to meet its basic functions comes into grave doubt.  Shortly thereafter, Medicare (in 2030) and then Social Security (in 2033) collapses.”

“In May, after many years of trying, Congress finally enacted a budget that changes that trajectory to one that balances within ten years.  But instead of following through on that plan, in October Congress replaced it with one that restores the disastrous spending trajectory that will bankrupt this country within the decade.  “The Omnibus” fulfills that bleak destiny. “

“It increases overall federal spending by $50 billion from the May budget in the first year alone (or about $400 for an average family).  In fact, this bill puts spending perilously above the trajectory set in the budget adopted by Congress in May.  It takes us that much farther down a steadily more dangerous road that leads toward a steadily darkening future.”

Below is the list of all 150 Republicans who voted to pass the spending behemoth – note the California Reps who voted for it: Kevin McCarty, Devin Nunes, Mimi Walters, David Valadeo…: 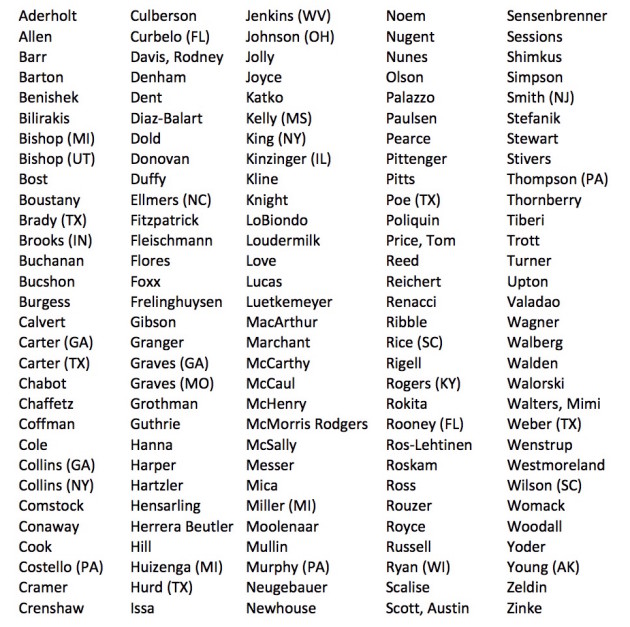