Former State Sen. Leland Yee, D-San Francisco, was just sentenced to only 5 years in prison for selling rocket launchers to Muslim rebels in the Philippines… while pretending to be a public servant. The real crime is that he wasn’t prosecuted for selling rocket launchers; Yee got a plea deal despite admitting he was part of a racketeering conspiracy that involved planning to use his public office to cut deals for money, conspiring to traffic in weapons, and drug money laundering. 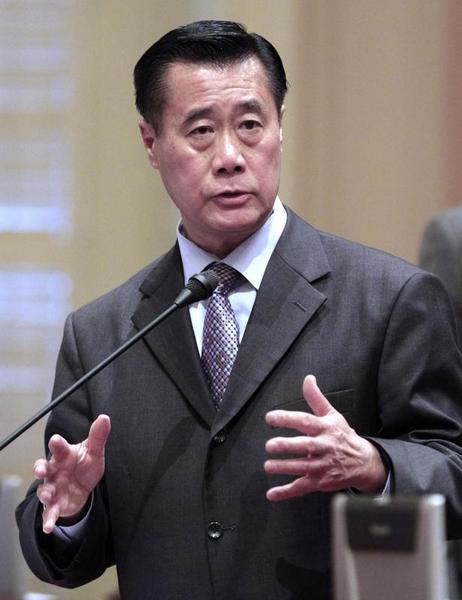 Yee was involved with Raymond “Shrimp Boy” Chow, who was convicted of racketeering, murder and other charges in a huge corruption case that stunned San Francisco and the state’s Democratic Party establishment. Yet Yee was only tried for trading political favors for campaign contributions, also known as public corruption and bribery.

This week, Yee asked the court for leniency in light of his “public humiliation, his wife’s severe illness, his admissions of wrongdoing and his past record of public service.”

Yet it was during his precious “public service” that Yee got involved in illegal arms trading.

Apparently looking for a quick way to retire his large campaign debt after a failed bid for San Francisco Mayor, Yee got involved with arms dealers, the FBI, and a $2 million arms deal, including the shoulder-mounted rocket launchers, from Pilipino Muslim rebels, according to an FBI affidavit.

Let’s not forget Democratic State Sen. Leland Yee was actually indicted by a federal Grand Jury on seven federal felonies including bribery, and arms trafficking in illegal firearms and weapons. Yee wasn’t just trafficking in tiny pearl handle pea-shooters – he was indicted for being involved in trafficking shoulder-mounted rocket launchers.

In addition to ironically being known as one of California’s leading proponents of gun control, the FBI affidavit described Yee as involved with gang members, laundering drug money, dealing in cocaine, marijuana, illegal cigarettes, fraudulent credit cards, murder for hire, in addition to the deals with known arms dealers.

While this amazing case was playing out in 2014, Yee never lost his job in the California Senate.

Only State Senator Joel Anderson, R-Alpine, called on colleagues in the California State Senate to expel three of its Democratic members who were facing criminal charges at the time, including Yee.

Then-Senate President Darrell Steinberg, D-Sacramento, instead pushed a vote to suspend with pay three members of the Senate. Anderson said that his three colleagues, who were accused and indicted of criminal charges ranging from weapons trafficking to public corruption, should be expelled, not suspended (with pay). “The members, however, will continue to collect their $7,940 monthly paycheck, courtesy of California taxpayers, which Anderson describes as a paid holiday,” John Hrabe of Calnewsroom reported.

Good Enough For Thee, But Not For Yee

Under the Homeland Security Act, American citizens who allegedly threaten American security are detained indefinitely, without even Miranda Rights being read. While Yee was accused of putting his public office up for sale, and promising to push campaign contributors’ agendas in the state Capitol in exchange for contributions, and arms trafficking with known Muslim rebels, Yee was let out on bail.

As I wrote in April of 2014 when Yee was let out on only $500,000 bail, Yee was running for California Secretary of State, and According to the FBI affidavit, planned to use the office to cut deals. In the FBI affidavit, Sen. Yee understood money given to his campaign was for the purpose of an introduction to an arms dealer. Yee even told one of the gang members he would be appointed to a Russian delegation when Yee won the election as Secretary of State.

“’Today, Yee is a 67-year-old man who has accepted responsibility for his conduct and pleaded guilty before this court,’ his lawyer argued,” the Los Angeles Times reported. “Yee has led an otherwise exemplary life as a family man, an active voice for the betterment of society, and volunteer.”

Regardless of one’s “exemplary life,” selling rocket launchers to Muslim extremists, laundering drug money and selling a public office sullies the exemplary history – even for a Democrat.

Oran’s Dictionary of the Law (1983) defines treason as “…[a]…citizen‘s actions to help a foreign government overthrow, make war against, or seriously injure the [parent nation].”

In many nations, it is also often considered treason to attempt or conspire to overthrow the government, even if no foreign country is aiding or involved by such an endeavor. If the federal government wanted to make a terrorism or treason charge stand, they could have. If they don’t, connected “public servants” like Sen. Leland Yee cut deals, get $500,000 bail, and 5 years in Club Fed.