An Appeal To GOP Legislators To Keep The Faith, End The MCO Tax 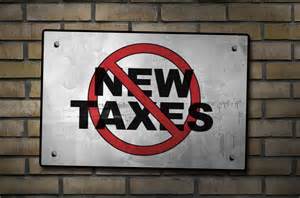 Next week a vote is likely to come before you to reauthorize an expiring multi-billion dollar tax on healthcare in California.  A vote that will fail if Republicans, together, simply don’t vote for it.

Last week I wrote a column where I walked through all of the policy and political reasons to reject the notion of doing a “deal” with Capitol Democrats to cast the needed votes for this tax they imposed on managed healthcare organizations three years ago on a party-line vote. I won’t reiterate all of those points, though if you need a refresher or haven’t read it I encourage you to do so.

I just wanted to make one last final appeal to all of you. California government is too big and spends too much. Long in the hands of liberals the welfare state here is grown to stunning proportions. Decades upon decades of failed liberal policies are creating more and more victims of a system designed to create government dependency. In this environment the only hope we have is to grow the number of Republicans in the state legislature. But that has proven to be a very difficult task. After the 2014 elections Republicans found themselves for the first time in the “super-minority” (which is when the three-year MCO tax was jammed through by the way), and we just saw the latest report on shrinking Republican numbers in California.

You need look no further than the GOP primary for President to see a party that is in turmoil – an uprising is truly taking place amongst GOP voters against an establishment class that has spent years delivering rhetoric, but has been engaged in deal making — growing government, and taking care of the well connected represented by big money and high-paid lobbyists.

I would submit to you that Republicans are losing market share in California because they are losing defining characteristics that matter. Lord knows after seven years of Arnold Schwarzenegger as Governor it’s muddy as hell for Republicans. Last year, almost defying expectations, Republicans came back to the brink — clawing back a few legislative seats and depriving the ability of Democrats to use a 2/3rds vote for their nefarious purposes — most notably raising taxes. In fact, the center point of the campaign, not just to the voters, but to the activists and to the remains of the cynical GOP donor community was just that — we need to elect more Republicans to stop tax increases. That was the primary theme around which newly minted State GOP Chairman rallied a beaten, beleaguered party and rallied — with success.

I know you have heard Chairman Brulte tell you that 2016 is going to be a bitch of a year for your caucuses. The turnout model in a Presidential election year is much different than the last election. Everything needs to line up to make it work — to hold on to the seats we have now — to be able to protect California taxpayers from from the legal plunder exercised by the Democrats.

As Republican legislators — you stand at a pretty big crossroads heading into the November elections. Look around at the political environment — and look at this deal in front of you. It is exactly the kind of crappy deal that is driving Republican voters nuts. We campaigned on holding the line against tax increases. I say we because it wasn’t just you, but many of us who joined with you in that chorus. And that path is clear — just say no. The MCO multi-billion dollar tax increase simply ends, and killing that tax becomes symbolic and a momentum-builder heading into the November election. A unified party riding with a strong tail wind towards a tough election is the best way to win!

The alternative — which I know some GOP legislators are considering — is a darker path, which severely imperils our party’s chances of holding onto our seats this November. This kabuki move where Republicans vote to extend the very high-profile MCO Tax, ascending to the demand of Jerry Brown in his State of the State Address. In return two obscure taxes in the shadows go away (the true effect of which is unclear since we can’t see into the books of private healthcare companies) — and for what?— so that the already bloated coffers of state government, with a legislature that chronically overspends on liberal priorities, can get their hands on well over a billion dollars more in precious taxpayer funds, courtesy of federal taxpayers. And to add insult to injury, in a deal similar to those in Congress that have created so much anguish, Republicans put up the vote for this deal by putting forward a wish-list of hundreds of millions of dollars in “Republican” (millions in funding for a medical school at U.C. Merced as just one example) and even pork for the left (millions for the controversial labor institutes at two UC campuses). This on top of well over a billion dollars in spending of “new” funds for massive social welfare spending and spending for developmentally challenged people that California taxpayers already pay enough to fund. Instead of insisting, like with transportation infrastructure, that existing funds be used for these purposes, the GOP betrays it’s promise, and it’s base, to vote to raise this tax, grab federal money, and become part of an “increase the spending in Sacramento” culture that is destroying this state.

Republicans should reject this MCO tax “deal” that is self-defeating. And use the sunset of the tax as an opportunity to actual demonstrate a promise kept — that if everyone rallied in the last election to increase Republican numbers, that it would mean no new taxes. No one worked as hard as we did to put Republicans in a position to broker a deal to increase spending.

If that is what Republicans want to do with their increased numbers, I represent a lot of Republicans who can find something else do do this fall than walk a precinct, donate money, write a column. Who wants to be a patsy? Not me.