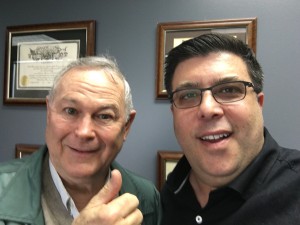 A great picture from when Dana Rohrabacher came by the office in January!

If you are someone who stays on top of the politics of Orange County, you might have missed the brief headline about former long-time OC GOP County Chairman and former Assembly GOP Leader Scott Baugh opening a campaign committee for Congress. For those who did not, there was some head-scratching, because Baugh – a strong conservative – is a constituent of U.S. Representative Dana Rohrabacher, a fellow conservative, and a fixture in Congress having been elected in 1988. In fact only Nancy Pelosi has more seniority on the entire 53-member California delegation, and only 19 members out of 435 have served longer than Dana.

Of course filing opened and closed in the coastal 48th District and Rohrabacher filed for re-election and Baugh never even pulled papers. Which would have been surprising to anyone who had talked to either Rohrabacher or Baugh.

I think it is important to walk people through why Baugh has opened a Congressional campaign committee and is actively raising money into it. And why he is not on the ballot this year, but will be in 2018. As a preliminary matter, the 48th CD is one of the wealthiest districts in the nation. There are likely to be many self-funders enter the race. Scott is not a self-funder so he is laying the groundwork early.

I suppose this is as good a time as any to roll what may seem like a rolling list of disclaimers. The first campaign I ever worked on in Orange County was Rohrabacher’s in 1988. Dana and his wife, Rhonda, are amongst my oldest friends in politics. Baugh stood in my wedding, we’ve had offices next to each other for a decade, and the very first contribution he received for his Congressional committee was from me. 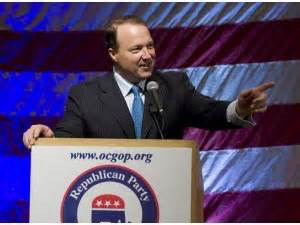 It should be clear that Scott Baugh feels a calling to serve in Congress. As a strong constitutional conservative, he would have a lot to bring to that institution. But this isn’t really a column about why Scott should be in Congress – but it is a column that would be easy to write.

Scott and Dana are close friends – and have been for many years now. Last year the two of them spoke and Dana told Scott that he was likely but not certain seek election this year, and that if he did, he certainly would not be in 2018. At that time Dana made it clear to Scott that when he does retire he would be endorsing Supervisor Michelle Steel to succeed him. Ugh, more disclaimers. Michelle and her husband, Shawn, are decades-long friends of mine – I played a leadership role in her Supervisorial race, and was honored to emcee her swearing-in ceremony. It’s also worthy of note that Scott also has a 20-year friendship with the Steels. While he was Chairman of the OCGOP, he endorsed her for Supervisor against other Republicans (a rare event) and opened up his home to host Michelle’s first fundraiser.

Well it doesn’t take a calculator, or even all of your fingers to figure out – if you want to run for Congress, and the incumbent tells you he may not seek re-election and he will be endorsement someone else, that you probably need to take some sort of action. Baugh circled around back with Dana in December and asked the Congressman if he would mind if he started raising funds for a potential race to succeed him. Dana not only gave his blessing, Baugh told me, but suggested that for Scott’s part this was a sound strategy. It was mutually understood that Scott would make it clear to every donor that he had no intention of challenging Dana this year, if Dana sought re-election.

And so earlier this year Scott did exactly what he and Dana spoke about, he started raising money. He did not announce a campaign of course. And as it turned out Dana in-fact decided to seek re-election.

Dana came by Scott’s and my office in mid-January, and sat for a while with us and with the third member of our office troika, Costa Mesa Councilman Jim Righeimer. Over the course of our chat the topic of Scott raising funds came up and again Rohrabacher told Scott that this was a sound political strategy for him. Dana confirmed that he would be running this year, but that if Ted Cruz were elected President would very much consider an appointment into his administration if that were in the cards, and Dana pointed out to us that this could mean a special election for his seat. In fact, Dana said this publicly in an article published in the OC Register.

Dana also stated that he did not foresee seeking re-election in 2018, noting that 30 years in Congress was a long time for anyone to serve.

When the Orange County Register ran a story in late January about Baugh raising money, Rohrabacher’s quote in the story was, “I think the people here like the type of representation I’ve been giving them… When this seat is vacant, he (Baugh) is going to be a very serious candidate, but this time he’s just preparing himself for that.”

So the upshot of all of this is that Scott and Dana are friends, and that his fundraising has taken place with Dana’s knowledge, consent, and blessing. At this point Baugh will be focused on a campaign for what looks to be an open seat in 2018, or a special election in 2017 if Dana is appointed in a Cruz administration (wouldn’t THAT be awesome!).

I will close by saying that should 2018 bring us a donnybrook between Scott and Michelle for Congress that while I will stand with Scott, I can assure you that it is a win-win proposition for conservatives, whichever one succeeds Rohrabacher.