How confident should Senators be when a governor’s appointee to the state Ag Labor Board faced opposition testimony with a line out the hearing room door, “and around the block,” but not one person attended in support? 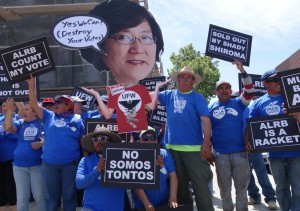 A testy and contentious confirmation hearing before the Senate Rules Committee Monday for Genevieve Shiroma, a 17-year member of the California Agricultural Labor Relations Board, ended after extensive testimony with a proverbial “F-you” to farm workers, when lawmakers voted 3-2 along party lines to confirm Shiroma.

Many Gov. Jerry Brown appointees must be confirmed by the state Senate. But they first receive approval from the five-member Senate Rules Committee before receiving an up or down vote by the full Senate. The committee is run by Democrats, and chaired by Senate leader Kevin de Leon, D-Los Angeles.

What was supposed to be thorough examination of the Governor’s appointee, was anything but. The hearing opened with de Leon asking Genevieve Shiroma if she had any special family or friends she wanted to introduce, as though this confirmation hearing was a celebrations, and had already been decided. She introduced her posse from the ALRB: ALRB Chairman William Gould, board member Cathryn Rivera-Hernandez, ALRB General Counsel Julia Montgomery.

This comes as no surprise since the Agriculture Labor Relations Board members and staff are currently being sued in federal court for violating the civil rights of Gerawan Farming employees in their refusal to count the ballots from a November 2013 union decertification election. The ALRB has acted more as an adjunct to the United Farm Workers labor union than as an impartial adjudicator for farm workers and employers.

Genevieve Shiroma, the subject of a legal brief to disqualify her from the ALRB for bias and conflicts of interest, gave rambling, disjointed, and repetitive testimony Monday. But it is her dubious relationship with notorious UFW lobbyist Richie Ross, with which Shiroma’s career is so inexorably linked, that drew the most questions. But these questions only came from Republican Senators; the Democrats were too busy offering Shiroma hearty congratulations and job tips. “As the president of my union and the California Labor Federation, I don’t feel you have a bias,” said Sen. Connie Leyva, D-Chino, and former President of the United Food and Commercial Workers (UFCW) Local 1428. “Mr. ‘Gerwin’ [sic] is a billionaire… I wonder if he’s supporting the farmworker overtime bill,” Leyva added.

Senate President pro Tem Kevin de Leon asked Shiroma what the ALRB was doing for outreach to non-English speakers, as though this was a new concept.

For the record, Gerawan has been family owned and operated since 1938, and is run today by Ray Gerawan and his sons, Mike and Dan, who can often be found working along side the farm workers in the fields.

Sen. Tom Berryhill, R-Twain Harte, extensively questioned Shiroma about her role on the Ag Labor Board and being so closely intertwined to the political goals of the United Farm Workers union and its lobbyist Richie Ross. Shiroma denied any bias, and said Ross is her paid campaign consultant for her Sacramento Municipal Untilty Board campaigns, and his roles as UFW lobbyist did not overlap. “I’m an honorable person,” Shiroma said.”My record is good.”

When asked about decisions agains tfarm workers which appear biased, Shiroma repeatedly said she follows the rule of law, as well as National Labor Relations Board precedence.

Yet, as Berryhill acknowledged, with Shiroma’s payments and contributions to Ross over the years, she’s being legally challenged over a conflict of interest and her ability to render fair and objective decisions, by Silvia Lopez, a 17-year farm worker at Gerawan Farming in Reedly, CA. 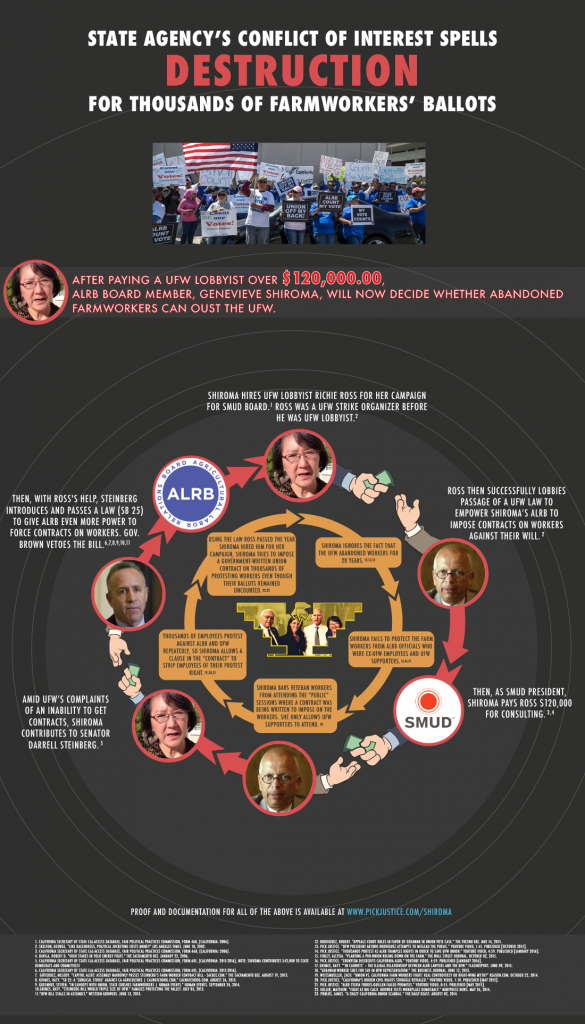 No Support For Shiroma; Many Offer Opposition Testimony

Sen. De Leon asked for any Shiroma supporters to testify. When there were none, he called for those opposed her to line up. A line out of the hearing room door formed of mostly Gerawan farm workers, identified by their “PICK JUSTICE” t-shirts, as well as some ag industry lobbyists, farmworker advocate Jesse Rojas, and Anthony Raimondo, the attorney for Silvia Lopez.

A whistleblower from the ALRB testified about the dubious relationship Shiroma and board member Cathryn Rivera-Hernandez have with the UFW. “Genevieve Shiroma worked tirelessly to force workers into the the union,” she said. “And Cathryn Hernandez is trying to fire me for what I know. They’ve been in cahoots for decades.”

De Leon would not allow Rojas to translate the farm workers’ statements, ironically after asking Shiroma about the importance of ALRB outreach to non-English speaking farm workers. So each of the workers spoke in Spanish, which de Leon said he’d summarize and translate for committee members at the end.

Here are some excerpts translated:

Mr. Padilla: “I’m here because I’m against Mrs. Shiroma because first of all, she does not want to count our votes. We feel that she is more in favor of the UFW than us. And we are her/their farm laborers and we work hard. We do not want them taking the 3% at all. So then she has not supported us, not at all. We want her to be replaced or we don’t want her to be in front of (unintelligible).”

At one point during the farm workers’ testimonies, Senator Berryhill said, “I kind of would like to know what they are saying.”

“Ok, well we can have, we can have… we’ll give a summary,” Senator De Leon said. “Yes, I’ll give you that summary, yeah, yeah.”

Ms. Chaires: “This is a contract that she wanted to impose on us, she wants to impose the union on us. There is discrimination here. I want her to tell me, why are we going to discriminate? We live in a country that does not discriminate. We are workers, truly legal. I’ve been working for this company for 7 years and I haven’t seen any, anything bad against me. We’ve been fighting a lot with the labor law, with the union. They ignore us. I believe that Mrs. Shiroma is incompetent, she has been incapable of resolving our problem because it has been more than 3 years that we’ve been fighting and fighting, fighting, fighting and she hasn’t done a thing for us.”

An important legal note: California is the only state in the country that allows a state agency to impose contractual terms upon a single private employer and labor union where there is no contract, and no agreement to permit a third-party arbitrator to set wages, terms, and, and employment conditions between one farmer and its workers.

Ana: “What I want is that they count the votes of the workers that work there at Gerawan. Because I believe that no one has been forced to work there. We all work there because we all like to work there. And there was a voting and up to this time, since the day of voting a labor law member told us when we voted, you are going to vote but your votes will not be counted. He told us, that supposedly they are there, the ALRB is there to support us. So then why haven’t they done that? What I want is for the votes to be counted. To be given the right to choose what we want.”

Mr. Sanchez: “I believe that we are free to choose if we want a union to represent us or not. What? I don’t know. What is the fear? Or what, why? They told us there would be a voting and there was voting, but the votes have not, have not been counted. So then, we come, that is, we are against her, for many things, we feel cheated.”

Attorney Raimondo spoke about the blistering Department of Finance audit of the ALRB for sloppy financial practices and the board’s inability to justify its budget, as well as failing to fulfill its primary mission of supervising worker elections on union representation.

Raimondo said the ALRB spent 34 percent of its increased budget on litigation and other actions against the employers and employees of Gerawan Farming, more than $10 million, to force a UFW contract on Gerawan and its workers — the opposite of what the audit says is ALRB’s primary role.

The ALRB has spent $10 million to deprive Gerawan workers of their voting rights on whether or not to decertify a union that claims to represent them. The workers voted in an ALRB-supervised election in 2013, and ALRB has refused to count their ballots.

Sen. Kevin de Leon’s summary to the Rules Committee members: “They want their votes counted.” And then he hastily called for a vote for the committee. Democrat Senators Kevin de Leon, Connie Leyva, and Holly Mitchell all voted to confirm Shiroma. Republican Senators Tom Berryhill and Anthony Cannella voted no.