The town of Apple Valley, California, deep in the heart of the Victor Valley of San Bernardino County, has a ballot initiative battle grappling with accountability for bond debt. But it’s gotten political with citizens claiming elected members of the Apple Valley Town Council have ceased making decisions in the best interests of their community. 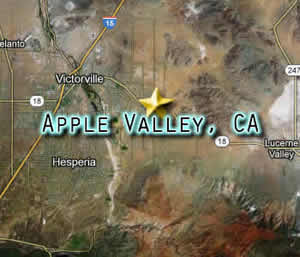 Nearly 4,000 Apple Valley residents signed petitions to bring Measure V to the Nov. 8 ballot to require voter approval of any Town project of $10 million or more, including the Town Council’s attempt to take over the existing Liberty Utilities’ water system.

The citizen-initiated Measure V, called the “Right to Vote on Debt Act,” was also unanimously approved by the Town Council to be on the Nov. ballot. But then the so-called Republican Apple Valley Town Council pulled a fast one and initiated and passed its own ballot Measure W, to compete with Measure V. San Francisco law firm Remcho, Johansen & Purcell was hired by the Apple Valley Town Council to write the alternative measure. This law firm represents the California Democratic Party, and wrote Gavin Newsom’s anti-gun measure Proposition 63.

If passed, Measure W would allow the town to continue its water system eminent domain acquisition efforts unencumbered by another election.

The town council’s Measure W would allow for some oversight, but specifically with acquisition of the water system excluded from voter approval.

However, the Apple Valley Town Council has taken it one step further and used public taxpayer dollars to fund their campaign for Measure W.

The town has also paid more than $50,000 to a Sacramento-based law firm for advice services related to Measure W.

Apple Valley recently issued its October-December “Our Town” newsletter, which is taxpayer-funded, to undermine the citizen-qualified initiative Measure V. This newsletter misrepresents and provides the voters of Apple Valley with a false comparison of the Town Council’s Measure W, and the People’s Voter-Approval Measure V. 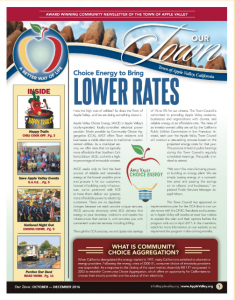 It is illegal for the Town Council to expend any of its taxpayer resources to advocate for Measure W’s passage or against Measure V’s passage.

While the Newsletter lists a number of alleged “public concerns” regarding the provision of water services to the citizens of Apple Valley, the striking difference between Measures V and W is that the Apple Valley Town Council measure is nothing more than an attempt to undermine the initiative qualified by the 4,000 Apple Valley residents. The newsletter is neither impartial nor merely informational as the law demands.

When shenanigans like this take place, public trust in elected officials wanes.

Adding to the issues surrounding the dubious Measure W, The Apple Valley Citizens for Government Accountability has released a report exposing recently uncovered Flint Journal articles which show Apple Valley Assistant Town Manager for Finance, Marc Puckett, resigned from his position as Director of Finance for the City of Flint, MI, after it was shown that he had failed to transfer money to the city’s pension fund for two years, costing Flint taxpayers $1.1 million dollars. A subsequent independent audit of Puckett’s Finance Department showed widespread mismanagement and a lack of transparency which ultimately cost taxpayers, according to the Apple Valley Citizens for Government Accountability, a citizen’s watchdog group.

The Apple Valley Citizens for Government Accountability, released the report in September detailing alarming information about Marc Puckett, that raises questions of credibility for the Town government, and the Council’s push for the eminent domain acquisition of Liberty Utilities.

Flint Journal articles published between 1999 and 2000 showed that Puckett’s behavior in Flint shows a frightening pattern that is evident today in how he handles Apple Valley residents’ tax dollars. He demonstrates an utter lack of transparency, and crafts budgets that we have routinely called a Œshell game for the way they obscure spending, said Diana J. Carloni, an Apple Valley resident and local attorney.

Flint Mayor Woodrow Stanley, was recalled two years after Puckett’s resignation, largely because of the financial mess his administration had left the City in.

It was actually under Puckett’s tenure as Finance Director that Flint water bills from its city-owned water utility soared, with some residents experiencing a ten-fold increase, the report found.

Puckett went on to serve as Finance Director of the City of Costa Mesa for ten years, before being put on leave, and mysteriously resigning soon after, according to the Apple Valley Citizens for Government Accountability report.

“Did the Town Council know of his history, and how can we trust what Puckett is putting out there if he has been so elusive about his past history?” asked Katie Manning, a member of the watchdog group’s leadership committee.

“This news should certainly put a damper on the Town of Apple Valley’s assurances that they can handle taking over the privately owned water company, and their newly announced plans to become the Town¹s electrical provider.”

In September, Puckett presented the third in a series of transparency reports detailing the cost of the town’s acquisition efforts of Liberty Utilities, Apple Valley’s water system, the vvdailypress reported:

“The 10-page report — first compiled more than a year ago by staff at the Council’s request — illustrates several financial numbers from Jan. 1, 2011, through the end of Aug. 2016, with $974,205 spent on attorney costs and a possible future expenditure estimate of $3.5 million.”

“The rates in Apple Valley are more than twice of what they are in Hesperia and the surrounding communities of Victorville, Adelanto and Barstow,” Puckett said. “Our water rates are excessively high. That is a complaint that we have continuously fielded from our residents.”

The transparency report revealed the town paid more than $47,000 for the advice services of Remcho, Johansen & Purcell LLC. The Daily Press previously reported that the services were related to Measure W, the town’s alternative to Measure V, the Liberty Utilities-backed “Right to Vote on Debt Act.”

In 2008, the Apple Valley Town Council selected John E. Brown, a partner in the law firm of Best Best & Krieger, to serve as town attorney. Best Best & Krieger is the same law firm which represented the city of Bell and were sued twice for failing to properly advise Bell on a $35-million bond offering in 2007. Bell’s top city officials including the mayor, four city council members, and the former city administrator were convicted on graft and corruption charges and sentenced to prison.

BB&K Attorney Brown has been overseeing the eminent domain acquisition of Liberty Utilities.

What could the motive be? Best, Best & Krieger partners have a financial interest and have and stand to generate substantial billings if the eminent domain takeover moves forward.

John Brown is also the City Attorney for other cities. From his bio:

Measure W is nothing more than restatement of current law.

Measure V is simple – it’s about the right to vote on long-term debt, and does not prevent capital improvement projects for Apple Valley’s infrastructure. It was specifically written to exempt improvements to parks, streets, bridges and other community needs. It only applies to bonds for revenue generating enterprises like water or sewer services.

Behaving more like left-wing, big government politicians, the Apple Valley Town Council maintains opposition to Measure V because it goes beyond the town councils’ plans to acquire the Apple Valley water system, and would cover other projects the town may want in the future. And they don’t want voter approval for acquisition of any enterprise that incurs public debt over $10 million.

No voter approval for debt which taxpayers are on the hook for means no accountability for elected politicians.