It appears every city, county and municipality in California has a tax increase measure on the November 8th ballot, and is spending taxpayer dollars promoting these tax increase ballot measures. Illegal government manipulation in elections has ramped up all across the state – and taxpayers are footing the cost. 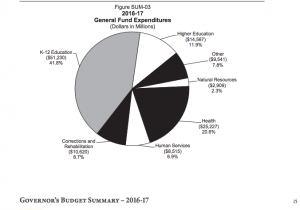 “From Yreka, near the Oregon border, to El Centro, just north of Mexico, more than 80 local governments are asking voters next month to approve sales-tax increases, the most on record,” Bloomberg recently reported. “While some aim to boost spending on roads or other projects, most measures would just provide extra cash,” proving that 80 local governments don’t really need to boost transportation or school funds – they need the infusion of cash to pay the public pension beast.

If your government is advocating (illegally) for a tax increase, you probably should vote against it. There are 10 million Californians living below the poverty level, and far more who have seen little growth in wages for nearly two decades. Tax increases not only don’t solve these problems, they exacerbate them – especially when the taxpayers’ money doesn’t go where we think it does.

“Nearly half of Corrections spending goes in salary to 55,000 department employees,” According to David Crane. “Likewise, most state spending on Medi-Cal (California’s Medicaid program) is pocketed by pharmaceutical companies, doctors, nurses and hospitals and 81% of school district spending, 61% of which is provided by the state, goes to or for the benefit of employees. The fact that government employees and healthcare providers will pocket 71%, or $85 billion, of General Fund spending this year helps explain why they are the state’s most aggressive political actors. With so much money on the line, they have a lot to lose and to gain from state propositions and who sits in the state legislature and governor’s office.” Crane was a special advisor to Governor Arnold Schwarzenegger, and a director of the California State Teachers Retirement System, California High Speed Rail Authority, and California Economic Development Commission.

Sacramento’s Measure B is the city politicians’ latest scheme to double the existing Measure A county transportation sales tax, increasing it from one-half percent to a full one percent. It would draw a projected $3.6 billion from the pockets of Sacramento residents and businesses over the next 30 years, making it the largest tax increase in the history of Sacramento County.

By doubling the local transportation sales tax for the next 30 years, local politicians plan to bail out Sacramento Regional Transit, despite a history of abominable management and gross, wasteful spending.  Measure B is also the scheme to fund the public pension black hole owed to Regional Transit employees and retirees.

Did I already mention that it is illegal for government to choose a side in elections, much less using taxpayer money to undermine what should be a democratic process decided by the taxpayers?

Recently, the Howard Jarvis Taxpayers Association and the Central Coast Taxpayers Association filed a complaint with the Fair Political Practices Commission alleging campaign reporting violations of the Political Reform Act by the County of San Luis Obispo, the San Luis Obispo Council of Governments and the Yes on Measure J Committee, a group also pushing a local transportation tax. These government entities have spent nearly a quarter of a million taxpayer dollars on promotional materials and government employee and contractor compensation supporting Measure J.

The Town Council of Apple Valley, California, in San Bernardino County, has spent hundreds of thousands of taxpayer dollars putting a competing ballot initiative on the November ballot in opposition to a voter-approved measure grappling with accountability for bond debt.

The district contacted thousands of Sacramento parents using robo calls promoting a parcel tax as well as statewide Proposition 55. But these communications cannot be considered “information,” nor do they offer a balanced message. “They are always one-sided puff pieces designed solely to extract yes votes from uninformed voters,” Jon Coupal, President of the Howard Jarvis Taxpayers Association wrote in an op ed this week.

California voters have a chance to push back against these illegal activities and illegal government expenditures using taxpayer funds, by voting no on many of these tax increase measures. When will enough be enough for politicians – especially in a state which already has some of the highest income taxes, sales taxes, capital gains taxes, excise taxes, inheritance and estate taxes? California ranks the highest among states levying an individual income tax, while California’s school system ranked 9th worst in the nation, because the bulk of the taxpayer funds are not going to the classrooms.

Katy Grimes is the President of the Sacramento Taxpayers Association