Ever since the surprise victory of Donald Trump on November 8th, California’s Democratic leadership have asserted their determination to thwart the Trump agenda. Expect unity and resolve from California’s legislature, where democrats now hold a super-majority in both chambers.

Even before Nov. 8th, California’s legislature was a trend-setting force, enacting laws intended to set an example to the nation. These laws encompass a dizzying array of issues, from mandating gender-neutral bathrooms in public buildings to officially designating denim as “the state’s official fabric to recognize its role in California history.” But if the economic well-being of working families remains the priority of California lawmakers, California’s legislature is failing.

This failure only begins with the enactment of minimum wage increases, which will go up to $10.50 per hour in 2017, then rise to $15.00 per hour over the next six years.

To rehash the minimum wage debate would be redundant. Anyone with business experience should see what’s going to happen. (1) Many small independent businesses, retail stores and restaurants that pay minimum wage, will go under. Meanwhile, major corporate chains will automate, shedding workers and raising prices, consolidating their grip on every market sector where they’re active. (2) Unionized government workers will automatically get raises because their wages are indexed to the minimum wage – putting even more pressure on government budgets and taxpayers. (3) People in the private sector who have dedicated decades towards learning a skill and as a result of this hard work can now earn $20/hour or $25/hour, will become justifiably disgruntled, because they will no longer be making much more than minimum wage. And so on. Bad idea. 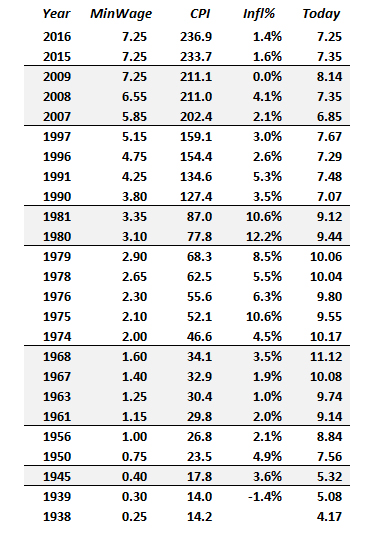 As can be seen on this chart, if you believe in setting some minimum wage, there is an argument for raising it to around $10.00 per hour to keep up with inflation. During the 60’s, 70’s and 80’s, the inflation adjusted minimum wage fluctuated between $9.00 and $10.00 per hour. But to raise it to $15.00 per hour, as California is on track to do, and as many cities around the U.S. have already done, has no historical precedent.

Another problem with setting a fixed minimum wage is that the cost-of-living varies greatly in California, as recently documented by California Policy Center researcher Marc Joffe in his article “$15 Minimum Wage for California: Maybe Okay for the Coast, but a Disaster for the Central Valley.”

This cost-of-living factor turns out to be far more significant than what may be explained by the national CPI (consumer price index). Over the past 30+ years, deliberate policies of California’s state government have artificially elevated the cost-of-living in California far faster than the national CPI has risen. To see just how fast, take a look at this next chart, which shows the growth in median home prices in California since the 1930’s, and compares that to the growth in the minimum wage. 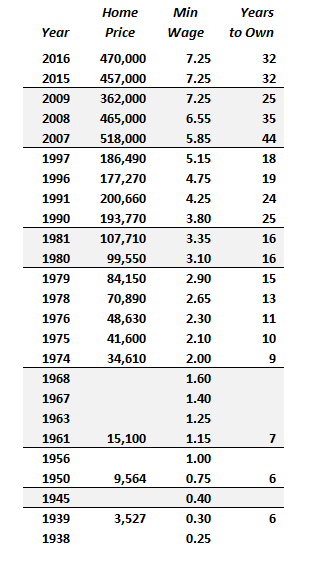 The significance of the trends displayed on this chart cannot easily be overstated. Home prices in a normal market should be roughly 3x to 4x median household income. While one cannot expect minimum wage to be at or near median household income, the trend is still shocking. In the 1930’s using census bureau data, a person could buy a home in California for the equivalent of six years of pay at the minimum wage at that time. That was true even in the 1960’s, because the minimum wage was going up almost as fast as the price of homes – 7x in 1961. But starting in the 1970’s the idea that two minimum wage workers could hope to buy a home began to die in California – 9x in 1974, jumping to 16x in 1980. And that was just the beginning.

Home prices in California over the last 30 years have jumped far faster than the rate of inflation. This is the result of years of restrictions on home building, combined with years of restrictions on resource development which increased the costs of construction materials, combined with years of additional mandates and regulations governing home design. As of 2016, the median price of a home in California is 32 years of pay at the current federal minimum wage.

The cost of a home has jumped from six years of minimum wage earnings in 1950 to 32 years of minimum wage earnings in 2016. And California’s legislature is just getting started. By 2020 – just three years from now – all new home construction in California will be mandated to be “zero net energy.” Think small windows, white roofs, automated lights that turn off if they don’t sense you in the room, all faucets and electric appliances remotely monitored by the utilities – imagine a host of dystopian algorithmic micromanagement of our lives – AND, think increased costs, even for energy. Whatever energy savings accrue to “zero net energy” households will be offset by “service fees.” Somebody has to pay for the “smart grid.”

Housing costs in California have skyrocketed through land use policies mandating “urban containment” and through efficiency mandates, but it isn’t just housing. Water and electricity has also fallen prey to artificial scarcity. This is a gold mine for utilities, whose profit percentages are fixed by the PUC, but can make billions by charging more per unit. It’s a gold mine for government workers, who collect more in property taxes and utility taxes. It’s good for government pension funds, whose solvency depends on asset bubbles. But it has made California unaffordable for the rest of us.

This entry was posted on Tuesday, January 3rd, 2017 at 6:12 pm and is filed under Blog Posts, Commentary.