In the labor union playbook to defend overly-generous “public servant” wages, one tired canard they love to trot out is that these government workers actually stimulate the local economy when spending their paychecks and pensions.  There are two major problems with that argument.

1.  It’s the classic “Broken Window Fallacy” — the ludicrous idea that if I take your money and spend it, society will be better off than if YOU spent it on something you actually preferred to acquire.
https://en.wikipedia.org/wiki/Parable_of_the_broken_window

2.  When local government employees work in a city, odds are that they don’t LIVE OR SHOP in that city.  Most of a city’s payroll is spent in OTHER cities — usually lower cost, more rural towns. The smaller the city or town, the more likely the employees live elsewhere.

Here’s the proof from a San Diego U-T article: 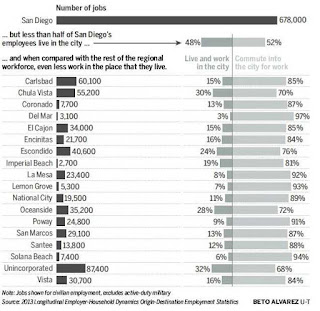 The worst category is California’s highly paid local firefighters — they SELDOM live in the town that hires them.  That’s because they commute to work only 6-8 times a month (doing some double shifts), so they can commute further distances than most “8 to 5” workers.  They live further out because they get more bang for the buck in housing.

For instance, National City has about 40 firefighters.  Last time I checked a few years back, only ONE actually lived within the city limits.  Most live 50 to 150 miles from this town.