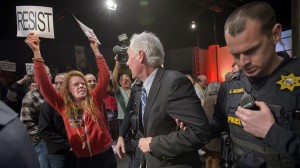 McClintock described the large crowd of protestors as “anarchists” who had gathered to “disrupt” his meeting – which is exactly what happened. But the Bee fishwives said, “only if by “anarchists’ you mean ‘neighbors and grandparents.’” The fishwives and especially Morain, have been historically critical of McClintock just for being alive (and conservative), in a way they’ve never been critical of some of the convicted crooks and criminals in the state Legislature or Congress. Their biting editorials, attempting to belittle the Congressman, have only made a mockery of the journalistic “integrity” and “independence” they claim to practice.

The editorial fishwives called the protest “a gathering grassroots firestorm,” as if all of these well organized and financed riots and protests are Tea Party 2.0 — a fake-news notion being pushed in every mainstream media outlet, and by Democrat politicians in major newspapers.

This was anything but a respectful, clean, happy and typical Tea Party event. Several sources at the event, who wish to remain anonymous out of concern for their own safety, described protestors slamming huge commercial trash dumpsters up against doors outside the building.

As for the crowd of “neighbors and grandparents,” sources said while there were some organized retirees expertly protesting, there were many young men in their 20’s and 30’s, pumping fists in the air and angrily yelling, ginning up the crowd.

A large passenger van drove up to the event with a labor union logo on it, carrying more protestors, reported one source.

The crowd wasn’t respectful the way all Tea Party events are, and videos and photos depict this (posted by protestors). Video and firsthand reports from people who attended show a far different story.  ABC news reported the crowd as “rowdy.” A Sacramento Bee reporter said McClintock was constantly interrupted and booed “as he defended his party’s national agenda during the hour-long event.”

Hundreds of protesters stood outside chanting, “Vote him out,” while those inside the theater held signs that read, “Resist,” ”Dump Tom McTrump,” and “Climate change is real.”

Perhaps the fishwives on the Sacramento Bee editorial board should read their own news articles before their next creative writing assignment. 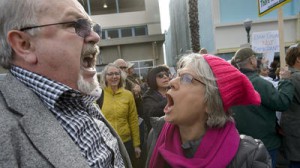 The editorial Fishwives and Morain showed their true ugly nature when they wrote, “After a dozen or so questions, McClintock scurried away, cowering theatrically behind a needless police escort.” That catty critique could not be a more vicious fabrication. Every constituent attending the event saw that McClintock did nothing of the sort, and in fact, tried to stay around and talk with constituents as he always does after townhall meetings. It was police who insisted he go, and ushered him out quickly, hoping to avoid an escalation of crowd intensity, given recent protests at UC Berkeley and UC Davis, which turned very violent.

This gruesome editorial board writes vile distortions like this hit piece on Tom McClintock, and then wonder why McClatchy’s stock is in the tank and they are selling off real estate assets, including their own building at 21st & Q Streets in Sacramento, CA.

“Remember that there were many people in America who disagreed and feared Barack Obama just as vigorously as you disagree with and fear Donald Trump,” McClintock said. The difference is the disappointed McCain and Romney voters didn’t destroy property, or assault Obama voters.

In a floor speech this week, McClintock offered an historical perspective:

“Once in our history, we stopped talking with each other.  That was the election of 1860.

That election was marked not by reconciliation, but by rioting in those regions where the opposition dominated.  The opposition party refused to accept the legitimacy of the election itself.  Political leaders pledged resistance to the new administration by any means necessary.   They asserted the doctrine of nullification, the notion that any dissenting state or city that opposed federal laws could simply refuse to obey them.  Finally came the secession movement – the ultimate rejection of our Constitution and the rule of law.

Have we not started down that road once again?” 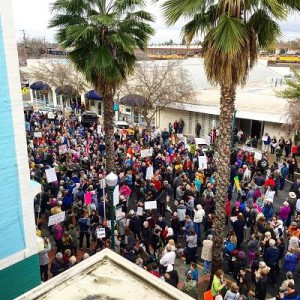 Nothing says ‘Grass-Root Movement’ like pre-printed signs: Anarchy vs. Protest

Anarchy is a state of disorder due to absence or nonrecognition of authority; lawlessness, nihilism, mayhem.

Protest is an expression or declaration  of objection, disapproval or dissent; a protest against increased taxation.

Leslie Eastman of Legal Insurrection weighed in on the stark contrasts: “I want to stress that McClintock’s area is about the reddest red part of our state. Given the amount of organization seen related to the#WomensMarch (as well as #DisruptJ20), I surmise that there was a great deal of progressive battle-planning before this event to have that many liberals congregate in small town California.”

While most Americans were enjoying Super Bowl weekend in front of the television with friends, across the United States some of the largest protests took place, including at President Donald Trump’s Mar-a-Lago resort in Palm Beach, Florida, Pittsburg, and Roseville. A feat of this magnitude is well-funded and coordinated on a national scale. There’s nothing organic or spontaneous about it.

These well-organized, aggressive protests are now targeting Republican lawmakers throughout the country, in addition to protesting Trump’s policies.

A Facebook group called the Town Hall Project, “a progressive, volunteer-based initiative working to identify and promote upcoming Congressional forums nationwide,”  posts lists of townhall meetings, coffees, and gatherings, and calls for protestors to show up: “We built a state-searchable interface for the Town Hall data, check it out below, and let us know how we can improve. http://www.1resistance.org/town-halls-events/”

“This is what democracy looks like — check out these photos of people showing up and showing out at town halls across the country!” the Town Hall Project captioned a Facebook photos of another congressman’s townhall protest.

It’s Democracy until people are assaulted, property is damaged, and paid thugs are pounding on doors with trash dumpsters.

When McClintock’s townhall meeting was over, police circled the Congressman and walked him to a car, while protesters yelled “SHAME.” In his floor speech two days later, McClintock said he has held more than a hundred town hall meetings in his district throughout the last eight years spanning the entire life of the Tea Party and Occupy Wall Street movements.  Through all those heated debates, the police have never had to intervene.

Given the wave of recent violent protests at MILO events at UC Berkeley and UC Davis, as well as the violence and property damage at protests by Black Lives Matter, McClintock’s safety, that of his staff, as well as constituents and protestors was likely the only police priority. 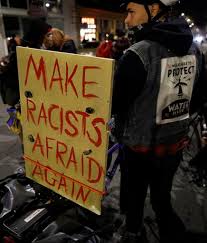 “In the last four elections, our country has turned dramatically away from the left,” McClintock said. “The Democrats have lost 67 House Seats, 12 Senate Seats, 10 Governors, more than 900 state legislative seats and now the Presidency.  That happened in large part because those who opposed their policies talked with their neighbors about the future of our country.”

McClintock warned, “This is not a tactic likely to change minds, but if it persists, it could tear down the very institutions of democracy that have served us so well for so long.”

It makes you wonder if the SacBee editorial Fishwives and boor Morain are really so radical and bitter, that they are able to ignore the violence, danger and potential for more bloodshed. McClintock is calling for rational discussion, but those he is appealing to, in a collective tantrum, appear to prefer a rampage toward secession.