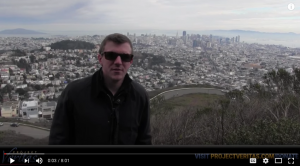 In the video, a San Francisco teachers union official admits he has hit students before, but “made it look like an accident.”

The video, a continuation on a multiple-year-long investigation of various teachers unions across the country, shows Antonio Mankini, the Staff Organizer and Treasurer of the United Teachers of San Francisco, admitting, “I can see grabbing a kid, I can see throwing a kid up against a locker. Not that I’ve ever done that, okay once, maybe twice.” Mankini, who admits he spent 17 years with law enforcement, says in the video he “closelined a kid in class onetime…” and “made it look like an accident.”

Project Veritas sent two undercover journalists to the United Teachers of San Francisco union, posed as a teacher, and a friend of the teacher. They told Mankini the teacher had hit a kid.

During the first meeting with the Project Vedritas journalist who posed as the friend of a teacher who had hit a kid, Mankini said the teacher shouldn’t worry about getting caught because “there’s no evidence.”

“Were there any witnesses? Just keep it that way,” Mankini said. “Seriously. If there weren’t any witnesses, it’s your word against the kid’s. Kids f*cking lie. Seriously.”

“Hell, maybe you didn’t really hit him,” Mankini continued. “Maybe he walked into your fist.”

“But if there were no witnesses, then you have that deniability and that’s something that could be used,” Mankini said. “No I didn’t do it. There’s no scars, marks, tattoos or bruises or anything. There’s no evidence.”

Additionally, Mankini confirmed that other teachers have hit students before and didn’t face the proper repercussions. “I mean, teachers have smacked kids before. And…sometimes they’re still working.” 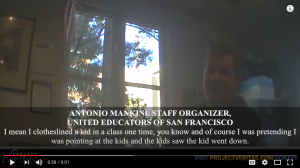 “Okay, but I think that I did cross the line probably. So maybe I should…” the undercover journalist said, expressing guilt for hitting the student.

But Mankini dispelled his guilt. “It wasn’t a closed fist…you just kinda, kinda…[swats] dude you know.”

The undercover journalist then asked Mankini if the union has had experience with teachers hitting students, and what to expect.

“I’ve seen it go away more than anything else,” Mankini said. “A lot of kids don’t come forward with it. It’s how they’re treated at home.”

Mankini told the Project Veritas journalist that he knew the “right” way to hit a child.

“I spent 17 years working with law enforcement so I know ways to…It’s like I told them, I could hurt you and never leave a mark. Elbows are awesome weapons too. They are harder than a fist and yeah it’s intense stuff so…”

Finally, Mankini shared his own experience with hitting a student:

“I clotheslined a kid in a class one time, you know and of course I was pretending, I was pointing at the kids and the kids saw the kid went down.”

“I mean, he ran into my arm. He wasn’t supposed to be in my class and of course I caught him here and he went down backwards.

“And that one still bothered me. That one, yeah, because I crossed the line. I know, I mean, I made it look like an accident and all the witnesses would have said no he ran into my arm because he ran into me. I didn’t reach over to knock him down you know. He ran into me.”

This video is another in the ongoing investigation into teachers unions by James O’Keefe’s, with more found at projectveritas.com. “From coast to coast we found teacher union reps, who shocked us with their cavalier attitude when it came to protecting the bad behavior of bad teachers,” O’Keefe said.

Recent Project Veritas teachers union investigations found attorney Mitchell Rubinstein from the New York State United Teachers describing a case in which he defended a teacher he names “Mike,” who was alleged to have forced students at knife-point to give him oral sex. The teacher was eventually convinced to resign, but was not convicted and may be at large. This is the video by James O’Keefe.

In another, Patricia Puleo, President, Yonkers Teacher Federation, provided a number of creative cover-ups for O’Keefe, posing as a teacher who hit a child. When O’Keefe said he went to Mexico for two weeks on vacation immediately following the incident, and said he could have a family member there, Puleo shockingly said, “You could. Your parents could have been down there, or your cousin could have been down there, or your brother and they were taken by drug dealers and you literally had to go bail them out and you didn’t know what to do and you lost your mind. You know people lose their mind. It was an emergency. Look, fall on your sword. You are so right I failed in my duty to call in and say I need emergency family medical leave. I failed to do that. The worst they’ll do is deduct you two weeks pay. That’s it.” This is the Video.

News reports of the Project Veritas teachers union investigations appear to be more upset with the undercover investigation than the teachers and union reps covering up child abuse.