The Left Is Rotting From Within

There is great evil afoot in this country. The left is imploding before our very eyes. But it is a rot from within, and it is self-imposed. The Democrat Party has no substantive platform any longer other than obstruction, “resist,” foul-mouthed vulgarity, violence, anger, and excessive whining. 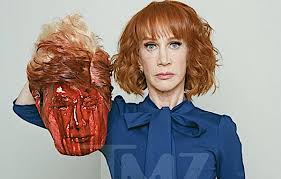 This rot is manifesting itself in some very public displays:

Campus snowflakes are working overtime at colleges and universities across the country to shut down speech. They are rioting, destroying property, and openly fighting professors who’s’ curriculum offends their sense of social justice. If that isn’t enough scurrilous behavior, these pathetic snowflakes are now demanding racially segregated graduation ceremonies, dormitories, and white students and professors are told to leave campuses for a “day without whites.” I remember when desegregation was worth marching for.

The barbaric Kathy Griffin video of the nasty comedian holding a mock bloody decapitated head of President Donald Trump, was not “over the top” as she and many claimed; her stunt mimicked radical Islamic terrorists’ videos of decapitations of Americans and Christians.

The New York Public Theater’s new Free Shakespeare in the Park production of “Julius Caesar” depicts the assignation of a Trump-like Julius Caesar. The story’s assassination scene, which is the main focus of the controversy, featured the Senators turning on Trump/Caesar, stabbing him until he dies in a bloody death scene. The sadistic audience gave a standing ovation.

House Majority Whip Rep. Steve Scalise (R-LA) was shot Wednesday along with a Congressional aide, a lobbyist and two Capitol Police officers, by James T. Hodgkinson, who opened fire on Republican members of Congress at a baseball field, near Washington, D.C. Hodgkinson’s social media posts show his obsessive anger with President Trump and staunch support of Sen. Bernie Sanders. Hodgkinson sent letters to his local newspaper as a political activist very angry with U.S. policies and the tax system. The shooting of Steve Scalise is about leftist terrorism.

Following Hodgkinson’s shooting of Rep. Scalise, New York Rep. Claudia Tenney received a threat, warning her “one down, 216 to go.” Other Republicans in Congress reported receiving calls from vile activists who said they were glad about the shooting, and hope there are more. 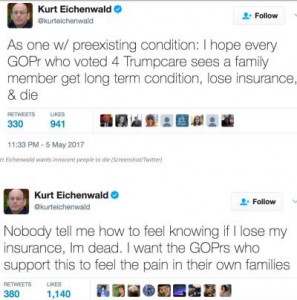 Virginia Governor and Democrat operative Terrry McCauliffe went off on gun owners after the DC shooting. McCauliffe said: “I have long advocated, this is not what today is about, but there are too many guns on the street. We lose 93 million Americans a day to gun violence. I’ve long talked about this.” McCauliffe repeated the ’93 million’ figure several times before correcting the number down to ’93 a day.’

Has-been Madonna claimed at a protest that she might blow up the White House. “Actress” Ashley Judd had the most bizarre rant on the same protest stage: “I’m not as nasty as your own daughter being your favorite sex symbol, your wet dreams infused with your own genes.”

A CNN anchor called President Trump a “piece of sh*t” on the air.

A columnist for The Washington Post observed that not long ago that assassinations often put an end to unhappy eras.

The Left Is As Mad as a March Hare 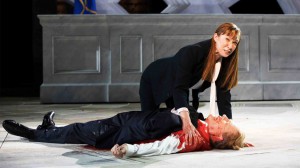 Richard Gere, George Clooney, Chelsea Handler, Alec Baldwin, Cher and other leftist Hollywood has-beens are coming out of the woodwork to share their disgusting, horrific opinions of Trump, in pathetic attempts to revive stagnant careers. Recently, Handler said, “now we have a new president whose name is Donald Putin Trump, who the majority of Americans think is a yuge f*cktard.”

As for accusations of Trump being an “unhinged dictator,” do these ignorant imbeciles mean dictators like Robert Mugabe, Hugo Chavez, Idi Amin or Vladimir Lenin? Those dictators who slaughtered and deliberately starved millions of innocent people?

Amid Rep. Maxine Waters’ many television interview calls for impeachment of President Trump, Rep. Al Green, D-Texas, and Rep. Brad Sherman, D-Calif., announced their plan to file articles of impeachment of Trump. Sherman said Trump should be impeached for interfering in the FBI investigation of Russian influence on the 2016 election.

Whether you love Trump or despise him, grounds for impeachment don’t include accusations of being a bombastic jerk.

Speaking to a group of New York Democrats, Sen. Kirsten Gillibrand (D-NY) dropped a couple of F-Bombs “Has he kept his promises?” Gillibrand asked the audience rhetorically. “No. F*** no.” Stay classy Kirsten.

At the same Dem convention, DNC honcho Tom Perez opened with, “We have a president …. I don’t know who it is, Putin, or Trump,” Perez said. ‘They’re in a bromance. This is really weird.”

Following the shooting in Washington DC Wednesday, Markos Moulitsas, the co-founder of the vile left-wing websites Vox and Daily Kos, immediately blamed Republicans for the attempted assassination and mass murder. “Republicans are getting what they want,” Moulitsas wrote on Twitter, responding to an old tweet from Kentucky Sen. Rand Paul that quoted Fox News contributor Judge Andrew Napolitano saying, “Why do we have a Second Amendment? It’s not to shoot deer. It’s to shoot at the government when it becomes tyrannical!”

The Democrat Party’s agenda is entirely consistent with all leftists’ agenda. Imagine if Hillary was in power. Imagine US citizens disarmed.

Mock presidential assassinations, mock beheadings, and talk of impeachment need to stop. More good Americans need to speak out and tell the left how repugnant and traitorous they are. Show your disgust.

There is great evil afoot in this country.