More is never enough for California politicians, as evidenced by our highest-in-the-nation taxes. The once-Golden State of opportunity and innovation ranks 48th in the Tax Foundation’s 2018 State Business Tax Climate Index. Again. Back in 2012 I wrote about our lousy 48th ranking, and that was before Gov. Jerry Brown’s Proposition 30 passed, which dramatically increased sales and income taxes. And it was before the California Legislature passed yet another massive gas/diesel tax on the state’s drivers, making California’s the highest gas taxes in the nation. 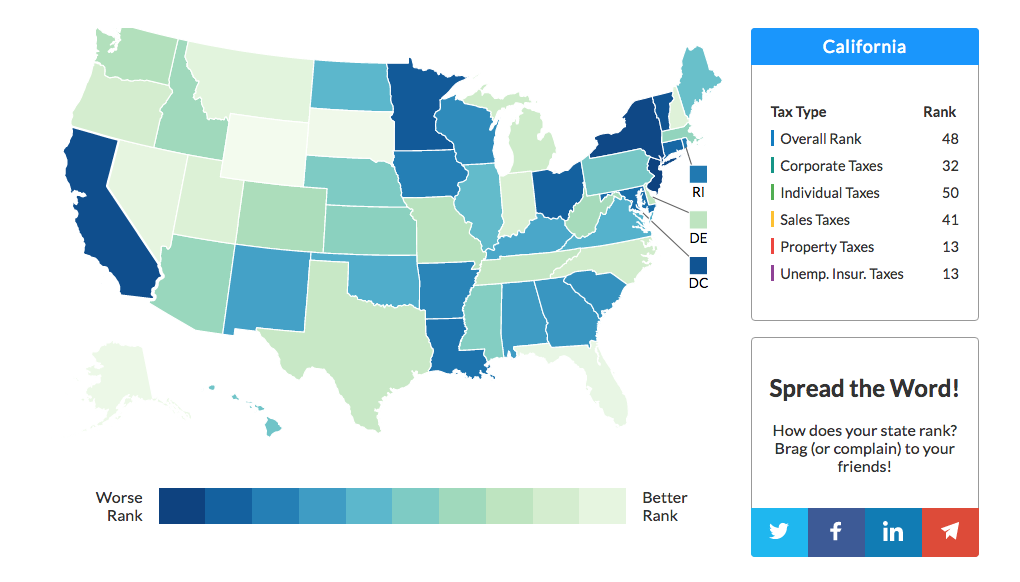 Why did they fare so much better in taxes than California?

Alaska, Florida, Nevada, South Dakota and Wyoming all have no state income tax.

Nevada even ranked better than California in the property tax category at number 8, to California’s number 13 ranking — even with our Proposition 13.

As the Tax Foundation notes in trends in state policy, four states cut corporate income taxes in 2017, and two states (Delaware and New Jersey) are in the process of repealing their estate taxes. States continue to reduce other taxes on capital as well, with New York continuing a multiyear phaseout of its capital stock tax and Mississippi about to embark on its own phaseout. Four other states have repealed theirs since 2015.

The in and outbound-migration in 2017 was another interesting study.

“Vermont, Oregon, Idaho, Nevada, and South Dakota had the most inbound migration in 2017, while Illinois, New Jersey, New York, Connecticut, and Kansas had the highest outbound migration,” the Tax Foundation reported. “Nebraska and New Hampshire were balanced, having essentially equal inbound and outbound moves.”

There are many reasons why people move, but taxes do play a significant role. The Tax Foundation explains: 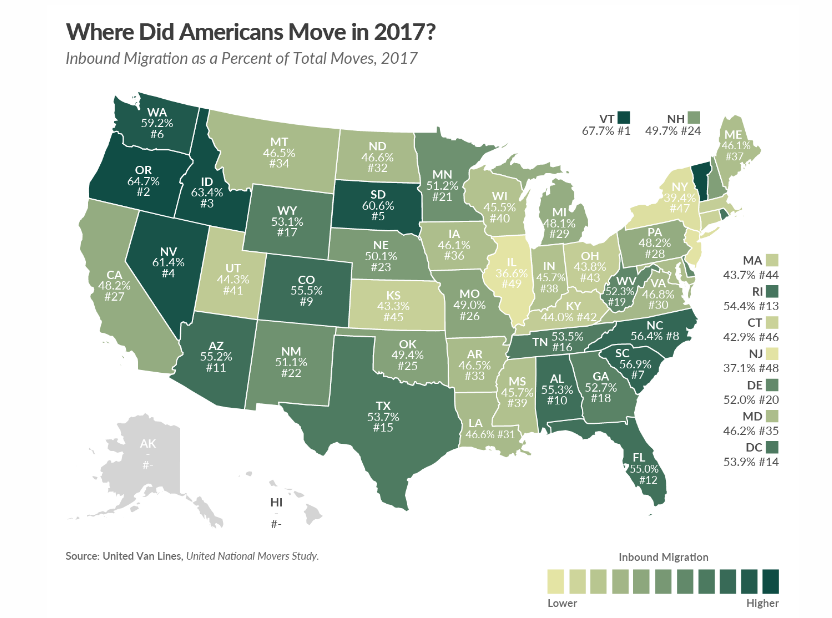 [T]here is a relationship between taxes and migration. Individuals move for a variety of factors. Climate, job opportunities, family, among others, impact the decision to relocate. Taxes can influence the decision too.

High taxes and nasty weather are a terrible combination. California appearing to remain static on out-migration is likely only due to weather. But if you look at the top inbound migration states, our neighboring states of Oregon, Idaho, and Nevada are the new home states to many former Californians.

With 40 million people in California, why is it that we don’t have enough tax revenue to fix our roads and highways, and dams and bridges? More is never enough.

Finally, California Democrats are scheming on a work-around of the GOP Congress and President’s new $10,000 cap on state and local tax deductions. Instead of paying taxes to the state, Senate Pres. Pro Tem Kevin de León introduced legislation last week to allow Californians to make a charitable donation a new state charitable fund in exchange for a  state tax credit. In other words, people would be able to donate to the state “charity” — the California Excellence Fund — instead of paying taxes. The new tax law Congress passed last month does not place a cap on deductions for charitable giving.

“The approach is clever,” the Tax Foundation says, “but even the most charitable interpretations of federal statutes, case law, administrative rulings, and IRS guidance suggest that these efforts will face serious headwinds.”

This is what life is like in a Democrat dominated state – our taxes are too high without the Federal subsidy, so instead of lowering the State taxes, Democrats have created a scheme to defraud the Federal government through a “charitable” deduction.

What exactly are we getting for our highest-in-the-nation taxes? Our schools rank at the bottom of the country on test scores, our infrastructure is not maintained and deteriorating, our roads and highways are ignored, the forests are not cleared of dead trees and burning down, our gas tax revenue is used for social programs, we have the highest poverty in the nation and one-third of the welfare recipients in the country live in CA, recreational pot is now legal, and our governor, obsessed with climate change, wants to ban the sale of fossil fuel cars in California.