The first takeaway from Gov. Jerry Brown’s May Revision of his budget for 2018-19 is that California didn’t need that $5.5 billion yearly gas-tax increase the Legislature passed last year. The proposal shows we have $8 billion in revenues in excess of projections.

In one area I persistently agree with Governor Brown, “Despite strong fiscal health in the short term, the risks to the long-term health of the state budget continue to mount.” Unfortunately, according to the governor’s budget revision, we have $291 billion in long-term costs and the legislature has done little to fix the state’s fundamental problems.

In his budget announcement and press conference, Brown emphasized the volatility of tax revenues, especially capital gains-tax revenues, shown in this chart: 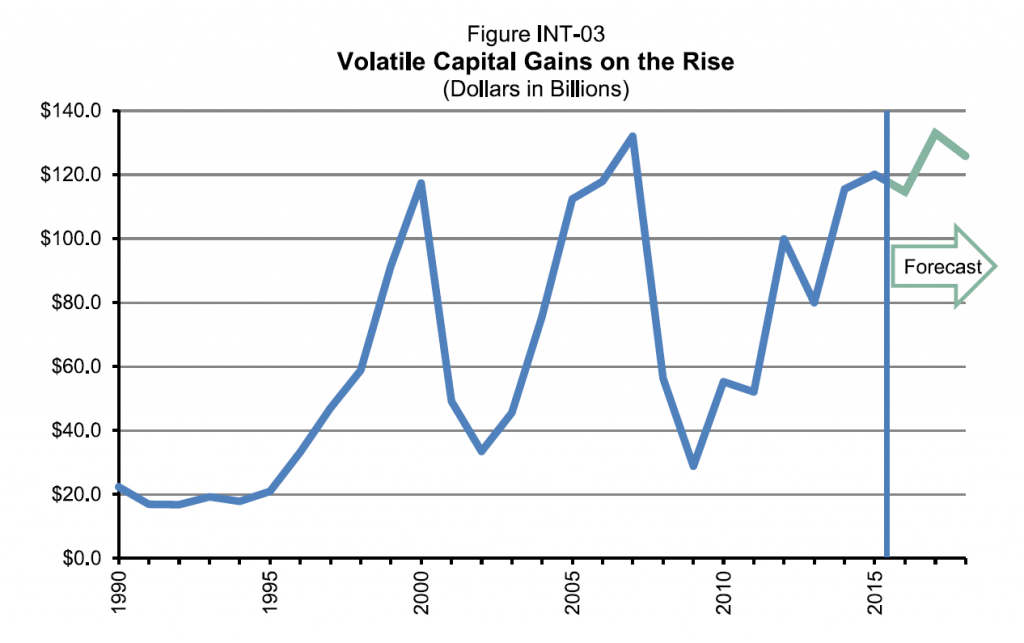 And he emphasized we’re overdue for a recession. Of course, he didn’t mention it has been President Trump’s economic policies – tax cuts and regulation reform – that have lifted the national economy above the sub-par performance of the Obama administration.

“How you ride the tiger is what we now face,” he said. “It’s going up, but when it goes down, a lot of these programs will be cut. Life is very giddy at the peaks.” No doubt, he is right. But he also ignored most of the reasons for this volatility even as he pointed out the Rainy Day fund will be filled at $13 billion, though he estimated that an impending economic storm would require resources closer to $60 billion. That’s a budget hole expected in the next recession, which could be $30 billion a year for two years. In such a scenario, the Rainy Day Fund would provide just 22 percent of that potential revenue shortage.

I see a much bigger danger. Taxes are so high in this state. To survive the next recession, companies will flee to states with much lower taxes. Because of the state’s punishing taxes, including then-Gov. Arnold Schwarzenegger’s $13 billion tax increase in 2009, our state’s economy crashed hard. Unemployment soared to double-digits and was exceeded only by the rates in Michigan and Nevada. It may happen again.

The period of rising revenues we’re now enjoying should be used to reduce our already committed liabilities and the overall tax burden.

Of course, having increased taxes last year – not just the gas tax, but the cap-and-trade tax Brown pushed through, estimated at $2.2 billion a year – Brown wasn’t about to suggest cutting taxes. It will be up to the voters to repeal the gas tax this November.

Given that the rising tax revenues won’t be returned to the taxpayers who worked so hard to earn them, the governor at least is proposing spending the money on some true needs. I have worked up a list of options, below, of 15 one-time spending recommendations that should be prioritized. But first let me recognize three of Brown’s proposals that have some overlap to my suggestions:

My proposals include prefunding the $2 billion for No Place Like Home, which will be paid back with the bond proceeds.

I’d also like to help out cities and counties with their pensions by injecting several billion dollars directed to their unfunded liabilities in lieu of taxpayer rebates. In his press conference, Brown unfortunately answered, when that question was raised, “A lot of cities signed up for pensions they can’t afford. The state can’t step into the shoes of the cities and counties. They’re going to have to handle that.”

Again, he’s largely right. And he’s actually putting his legal resources and political chits behind the overturning of the so-called “California Rule,” which ratchets up pension costs with no ability for governments to correct costs at the front end, leading them to fiscal ruin at the back end.

Sacramento is renowned for taking funds from cities and counties during recessions. Giving something back to them would be a noble thing to do.

The state also has a backlog of rape kits. Not only is that unfair to the victims, but after catching the Golden State Killer, how many more predators could we catch and prosecute?

We also need to harden power lines across the state. If this state wants to emphasize electric cars, we’re going to be sending a whole lot more electricity around, which means more wildfires unless the power lines are put underground.

Compared to his January proposal, the governor’s May Revise only tinkered with education funding. But we could use more funding for career technical education. A lot of kids don’t want to go to college, but could have successful careers in the trades or other vocations. They should be afforded the training opportunities just as much as those we send to our elite institutions.

Finally, this budget largely is a stopgap getting the governor beyond his tenure in office. He said he wanted to leave it in good shape for his successor. But so much more needs to be done, especially in improving the state’s harsh anti-business fiscal policies, shoring up pensions, fixing long-neglected infrastructure and reducing the housing and homelessness crises.

Below is a list of my 15 policy proposals for spending the $8 billion in excess revenues. It is largely in priority order. And if the state wins the litigation for the No Place Like Home bond dollars, or it is approved by the voters on the ballot in November, then that money could be cycled into any of the remaining priorities.