Following Starbucks’ corporate announcement that anyone can use the store’s restrooms, even without buying anything, I posted on Twitter: “Starbuck’s: A national public bathroom chain which serves mediocre espresso coffee topped with a frothy whip of white privilege, and an extra shot of millennial attitude.” 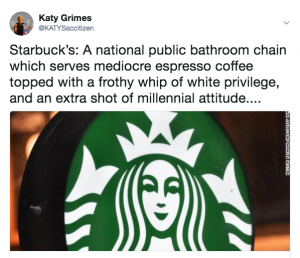 What prompted the post? While Starbucks’ executive chairman Howard Schultz travels the country on an apology tour for racial insensitivity, the Starbucks in my Sacramento neighborhood has become a cesspool for heroin addicts, and weird naked guys using the restroom… without locking the door. Yep, a Starbucks employee opened the store bathroom to find a naked guy doing whatever he was doing in there.

One of our Sacramento Starbucks employees was also poked by a needle while cleaning the restroom. And this is happening at Starbucks stores in other cesspool cities with exploding drug-addicted homeless populations. Starbucks baristas were poked by needles in Seattle, and have had to undergo HIV testing. Starbucks management did not react well: “We are aware of this citywide issue, and have protocols and resources in place to ensure our partners are prepared to take proper safety precautions as needed,” a Starbucks spokesperson told The Stranger.

WTH is going on?

Starbucks changed its bathroom policy after two black men were told to leave a Starbucks in Philadelphia last month by a store manager after they used the bathroom without first buying anything.

The company informed US employees on Friday that people can gather in their cafes and patios even if they don’t buy drinks, and that store bathrooms are available to everyone.

“Any person who enters our spaces, including patios, cafes and restrooms, regardless of whether they make a purchase, is considered a customer,” Starbucks said in an email to employees.

Most restaurants and fast food stores have policies against nonpaying customers using restrooms. However, Starbucks has always marketed its stores as a hangout place. But now, Starbucks is turning its coffee stores into homeless shelters and injection facilities for addicts. They may want to consider installing special boxes for properly disposing of used needles.

This ostensible “compassion” for the homeless and drug addicted by virtue signaling Starbucks senior management is putting their employees and customers at risk. Customers can get coffee elsewhere, but employees are stuck dealing with the drug addled, heroin addicted, meth addicted and crazy homeless. Starbucks employees must clean the bathrooms and take out the trash, and they are on the front line dealing with the crazy homeless, and drug addicts.

Starbucks has promoted social justice policies in the past. “The company in 2015 tried to foster conversations about race relations by urging baristas to write “Race Together” on customers’ cups, a move from which it backed away following social-media backlash,” the Wall Street Journal reported.

While Starbucks announced a few days after thePhiladelphia incident that it would close its more-than 8,000 American company-owned stores to conduct “antibias” training for employees (on May 29), they may want to instead bring in Evan Hafer — a man who loves his country, and is operating a thriving business. Black Rifle Coffee Company supports firearms related causes, military causes and law enforcement causes – and they make wickedly good coffee.

Starbucks senior management could learn a thing or two from the Black Rifle Company:

Founded on the principles which made this nation great, we strive to emancipate the conservative American from corporate coffee.
More than a product and more than a company, we are a culture. A culture full of motivated men and women who roll up their sleeves and get the job done. Join us as we take action on our commitment to the veteran community and those who support it.