Here’s the most recent figures on home ownership, by state. Not surprisingly, 47 states have higher homeownership rates than California. We are 48th. Hawaii — where everything but sun and surf has to be imported by boat or plane — is 49th. CA is essentially tied with Hawaii — or they are essentially tied with us (take your pick).

50th is NY. California politicians LOVE NY — the state that often keeps CA from being the worst at whatever.

I suppose some will be surprised that the Golden State is “only” 48th. Revel in our success. 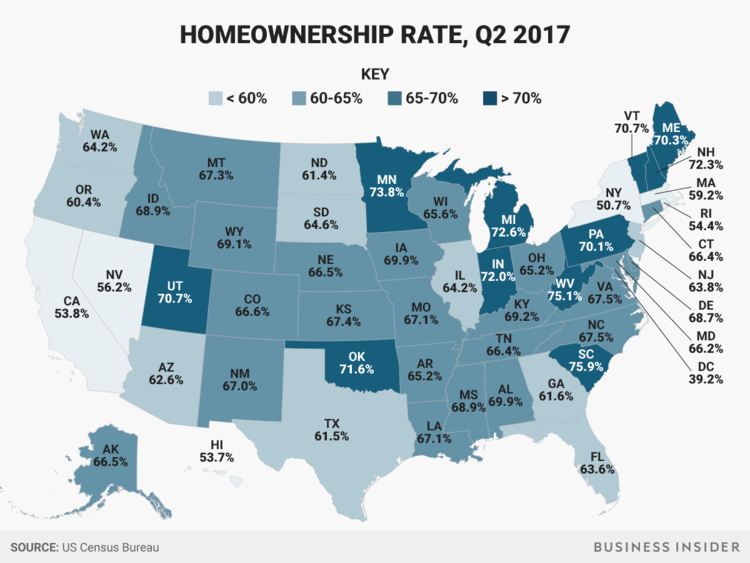 One point must be made — it’s not the high demand in CA that keeps houses out of reach of many families. It’s government-imposed housing scarcity, combined with high CA building costs — especially huge building fees,

How scarce is CA housing? Consider: The housing is fare cheaper in Texas than CA for a reason. In Texas, government is friendly to home builders — rather than their enemy.

Here’s a sobering graphic comparing the CITY of Houston, TX with the entire STATE of California.

What it shows is that more permits for single-family homes have been issued in the city of Houston than in the entire state of California from 2011 through March 2015 (133,462 vs. 132,915). The result is that the median Texas home costs ONE-THIRD what the median California home costs. And here’s the kicker: 17 states have lower home prices than Texas!

Related: A recent survey revealed that the one-way rental rate for a 26-foot U-Haul truck from Los Angeles, CA to Houston, TX is $2,371, which is about 3 times the $806 rental rate going in the opposite direction from Houston to LA. Too many U-Hauls going in one direction.

​BOTTOM LINE: The median home in other 49 states is about1/3 the price of the median CA home​.​ CA has the 3rd lowest percent of homeowners of any state.