The conspiracy of silence in the Catholic Church over scandals involving sex, homosexuality, cover-ups, payouts, betrayal, and corruption have left many Catholics disillusioned and even angry. Corruption wears many disguises, including liturgical garments. 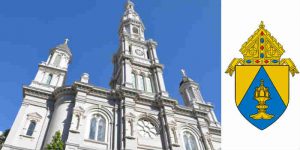 As Part l of  “Conspiracy of Silence in Catholic Dioceses” addressed, Sacramento Bishop Jaime Soto is one such cover-up agent, according to many area Catholics – not just many Catholics, but every Catholic in the region I’ve spoken to say this.

The Sacramento Catholic Diocese even sent out a letter, ostensibly written by Fr. Jeremy Leatherby, admitting to an unnamed crime, and announced he was “stepping aside.” The only problem is that unlike many other parishes, this one never bought that Fr. Jeremy actually crossed any lines, and they dared to question the diocese.

Fr. Jeremy Leatherby was accused of sexual relations with a women in his parish. At first, his parish was told he was in “ill health,” leaving many parishioners to wonder if he was dying.  Eventually, it came out that the diocese accused him of “ministerial boundary” violations with a woman. However, the woman in question was apparently troubled, in an abusive marriage, and had developed an obsession with Fr. Jeremy.

Did Fr. Jeremy Leatherby actually write the letter under duress? Did someone at the diocese write the letter and sign Fr. Jeremy’s name to it? Parishioners have contacted me in droves – not out of some blind obedience — but out of anger that their charismatic, holy priest was set up and then removed under the guise of the Bishop’s all-powerful authority.

Thursday, after publication of my first article,  Sacramento Diocese representative Kevin Eckery and I spoke again. Eckery initially said my article had may things “factually wrong,” but as our hour-long discussion moved along, it became apparent his challenges were not about my article, but were instead about Dave Leatherby’s interview on The Phil Cowan radio Show on Monday. Dave leatherby is Fr. Jeremy Leatherby’s grandfather.

As we discussed criminal procedures in dealing with priests, we discussed Woodland priest Uriel Ojeda, who was sentenced in 2013 to eight years in state prison for molesting a teenaged girl. The diocese handled the situation procedurally correctly, and Ojeda was properly arrested, convicted and sentenced to prison for his crime.

I asked Eckery what the Sacramento Diocese policy is on homosexual priests who have sexual relations with seminarians (college students), or each other, or on under age boys. “Abuse is abuse,” Eckery said. “It doesn’t matter who the perpetrators are. There are no special protections for gays.”

This is particularly interesting since far too many Sacramento area parishioners say the homosexual priests are running  sex rackets, and that Jesuit seminaries are a recruiting ground for young gay men.

In Conservative author Rod Dreher’s recent article, “Queering the Catholic Church,” he writes, “it’s astonishing how top liberals in the hierarchy have steered this thing to move the Church towards embracing gay rights. This reads like something out of the late conspiracy theorist Father Malachi Martin’s novel Windswept House, but … it’s true. Excerpt:”

Fr. Martin—who dreams of the day when the Catechism’s language on homosexuality will change, priests will be able to “come out” and same-sex couples will be able to kissat Mass—has beenhandpicked by the Vatican to headline the World Meeting of Families along with several top revolutionaries, cardinals who’ve already said conscience determines whether one can receive the Holy Eucharist while engaging in homosexual activity, and who’ve alreadyflaunted brazen homosexual-themed events within the sacred spaces of the Church.

We’re clearly in a well-plotted endgame now. According to the men behind Pope Francis’s election—ominously scandal-ridden figures like Cardinal Danneels, Cardinal Murphy-O’Connor, andCardinal Theodore McCarrick—the timeline was estimated at justfour or five years to “make the Church over again.”

Catholics for years have told me that the seminary has become a recruiting ground for young gay men. Based on Dreher’s article, and others’s first hand testimony, it certainly appears so, especially within certain liberal Jesuit circles.

“Most surveys find between 15 percent and 50 percent of U.S. priests are gay, which is much greater than the 3.8 percent of people who identify as LGBTQ in the general population,” reported Ross Benes, author of The Sex Effect: Baring Our Complicated Relationship With Sex.

It is well-known that those with same sex attraction support and promote one another, to positions of influence, leadership, and even the Episcopacy. Within the Catholic Church, parishioners report they discriminate against and persecute heterosexual priests, and those who believe what the Church teaches.

Many of those with same-sex attraction begin to subvert and descent from church teaching thus causing serious division within the church, both clergy and laity.

As evidenced by the Cardinal McCarrick scandal and other sex abuse situations that are becoming public throughout the church in the world, there is a network of Bishops priests and Cardinals who are involved in sinful activities, who promote one another.

Many in Sacramento believe this is the case with Bishop Soto who was elevated to become a bishop by mentors who are/were involved in this network.

Soto was in Orange County prior to becoming Bishop of the Sacramento Diocese. While in Orange County, Soto, described as “a virtual Aztlanista,” was accused of being an an active member of the Orange diocese sex-abuse scandal cover-up.

When an interviewer broached the unavoidable sex-abuse subject in a 2008 article in Orange County, “Soto noticeably became nervous. ‘It was a difficult, difficult chapter in the church,’ His Excellency stated. ‘Mistakes were made that hurt young people.’” (the understatement of the century)

Rod Dreher notes, “Funny, but since the McCarrick thing broke, I’ve been getting a fair number of ‘keep the pressure up’ e-mails — almost all of them come from priests who are sick of what they see on the inside, but feel gagged for the reasons the anonymous priest above does.”

And I have been contacted by many readers, people who heard my interview with Phil Cowan, and Catholics from all over the diocese region – Oregon border to Vacaville.

In another article, “Letter From a Frustrated Parish Priest,” Dreher posted the letter from a priest, noting he had tears in his eyes as he did so:

As a priest in a diocese that is, sadly, riddled with corruption, manipulation, and bullying of priests on the part of the bishop and chancery staff, I can testify that for many of us, this is EXACTLY THE SITUATION in which we find ourselves.

In this diocese the bishop has protected his own which led to scandal when the local media found out about it, and resulted in unnecessary and completely avoidable scandal.  Priests, like myself, who called the bishop to account were called in before diocesan lawyers and threatened with canonical sanctions.  There were panels who went around questioning priests about who “leaked” the information.  Some of us retained our own counsel, both canonical and civil, which seemed to scare them away.  Others have been sent for “evaluations” and not returned for a long time. Those, like myself, who were not sent away for “help” with “anger issues’ have been persona non grata.  It’s a sad situation.

Everybody knows about the corruption, but nobody will do anything.  The vicar general knew, the judicial vicar knew, chancery staff knew, and NOBODY HAD THE GUTS TO DO ANYTHING.  Those of us who choose to risk our priesthood to do something, were/are punished.  It has created a major divide in the presbyterate here, and priest morale is at an all time low.  There is a somewhat cautious hope that things will get better when the bishop retires, but there is also great nervousness because of who Francis will appoint.  Many of us are worried it will only get worse.

I guess my point is this: you are right.  There is a very serious problem in the Church.  Bishops are no longer fathers to their priests, but are more like corrupt police officers who are willing to give a beating to those who risk exposing their corruption, or as one priest I know describes them: they are like alcoholic fathers, who at moments can be very fatherly, but after a few drinks berates you and gives a few belt shaped welts on your backside.

Thank you for writing this.  Thank you a thousand times.  SOMEONE needs to say something.  It is my belief, that given the way things are, that the laity must stand up and defend their priests.  The Church needs a true “age of the laity” where the people in the pews rise up and demand holy, competent and healthy bishops!

Read the entire article. And think hard about all of this. Why would any seminarian, priest, bishop or cardinal participate in on-going secrecy or cover-ups surrounding child sex crimes, or sex crimes with seminarians, and cover-ups in the Catholic Church? How many bishops are ignoring, concealing or enabling wrongdoing, now and in the past, and why?

Next: Modern-day Borgias, and paid flunkies and flacks in the offices of the complicit bishops