What is the matter with leaders in the Catholic Church who refuse to listen to clergy sex abuse victims, as well as whistleblower priests who report sex abuse? Instead, they illegally bury the reports of misconduct, order others to do so, and punish good priests who refuse to also act illegally. 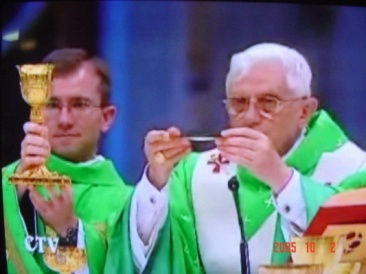 The evil corruption in the “holy” men who cover up heinous abuses and then turn on the good holy priests who expose these abuses is so deep, they force the whistleblower priests into mental institutions for lengthy psychological evaluations.

To this end, more than 1,000 people have signed a petition in support of Sacramento, California priest, Fr. Jeremy Leatherby, who they believe is being unfairly punished by Bishop Jaime Soto. Many of his parishioners believe their charismatic, holy priest was set up and then removed under the hammer of the Bishop’s all-powerful authority to get him out of the way. And they want to know why.

And many have stopped making regular donations to the Sacramento Catholic Diocese to ensure their voices are heard.

In response to a letter Bp. Jaime Soto sent to every priest in the diocese of Sacramento, a petition was started to return Fr. Jeremy Leatherby toactive ministry by Gerald Klaas. Sally Leatherby, Fr. Leatherby’s grandmother, wrote a letter to Bishop Soto saying she has “many concerns” about what was in his letter “that raises more questions than answers.”

“Father Jeremy has remained faithful to his vows of obedience to his bishop and has asked repeatedly for everyone else to remain silent,” she wrote. “I find it hard to see and hear this spin and not to respond.”

Mr. Klaas has also sent copies of the petition, signatures and written messages to Bishop Soto:

Bishop Soto,
Please find attached a printout of our online petition regarding your handling of Father Leatherby’s case.  I pray that you will bring this matter to resolution quickly. May Jesus, Mary and Joseph help raise your awareness of how this impacts the faithful in the Diocese of Sacramento.
Prayers always,
Gerald Klaas
Adminstrator – OurVoiceintheDiocese.com

1. Our pastor has been indefinitely removed from us without adequate explanation. How can the Bishop justify a two and one half year suspension based on an allegation?
2. The initial misrepresentation, made in writing on behalf of the diocese, that Father
Leatherby was absent due to illness, continues to cause the faithful to question diocesan credibility. The Bishop should own up to the false statement.
3. The diocesan response has been disproportionate to the allegations especially when
no criminal or uncivil proceedings were instituted or referred to the authorities.
4. Father’s unexplained suspension is not helping your lay faithful or clerics. It is causing scandal and hardened hearts toward the Bishop’s episcopate.
Either substantiate your decision to your flock immediately with credible evidence or
immediately return Father Leatherby to active ministry.

Some comments left by petition signers include:

*It is time to resolve this matter. A very faithful and holy priest is being kept from ministry while rumors abound about priests committing adulterous acts and a blind eye is turned…perhaps the Papal Nuncio needs to be contacted to uncover the truth and spare so many good people from sins of gossip and speculation .

*This is a disgrace to our faith and due process. Especially since itâ€TMs a personal vendetta from our current bishop! Shame on him. Prayers for father Leatherby

*I want more than just a reinstatement..that would be easy for the diocese. I want ANSWERS to the issue at hand..homosexuality going on in Sac Diocese and being ignored, and the faithful punished. I want him publicly cleared, and a public statement from the diocese.

*This is a travesty, an attack on the very fabric of our church. Silence those speaking the truth. It is time for all of us to speak out and demand that this be resolved and Father Leatherby returned to his ministry.

*I have written a personal letter to Bishop Soto challenging him to act like a bishop, realize the harm he’s done and open the diocese to full and complete investigation before he ruins the diocese altogether. It’s crumbling and mostly because of his own handiwork.

*Justice delayed, justice denied. The Sacramento Diocese should proceed to the formal process if the Bishop thinks he committed acts against Canon Law and Diocesan policies. Those who committed sexual abuse among the clergy should not be covered up by the bishop. Silence no more!

*Please bring back Fr. Leatherby to active ministry, we need a Holy Priest, who follows our Churches Teachings and fills our hearts with Joy and Hope. He inspires our young children/teens to want to learn about Jesus Christ and the True Teachings of our Catholic Faith.

*Reinstate Father Leatherby he is the single most positive and holy priests I have ever met in all my travels abroad. It was he who made me consider to become a Deacon and the loss of him that made me reconsider that. We the parish of Presentation miss him dearly. No matter what I stand by him. God bless Him and his family!

*Bishop Soto, We want answers. We want a resolution.

*Bishop Soto, this man has been deprived of the protocol, the process any priest or religious is entitled to if accused by anyone of anything! Do not leave him to twist in the wind, hoping that he’ll leave the priesthood! He’s a holy, godly man and priest. Return him to active duty and restore all his priestly faculties immediately, please. We the laymen of the Church have a right to ask this of you, seeing the abuses of due process Father Leatherby has been subject to!

*This Holy priest has the most thought provoking sermons and the most reverence that I’ve ever seen during the transubstantiation.

*In light of the events out of Pennsylvania, no more secrecy! reasons (a lie). So I agree, my confidence in them is very low. The diocese originally stated his absence was for health.

Fr. David Nix, Roman Catholic priest of the Archdiocese of Denver, is another priest targeted by a corrupt diocese. Earlier in the year, Fr. Nix “relayed reports of misconduct with children to Archbishop Aquila, and since then, I have been homeless and ignored by his chancery. After months of reaching out to them, I am now forced to go public with these scandals.”

You can read his horrific treatment and story at his blog: PadrePeregrino.org

Fr. Nix has been cut off from his diocese. “I never agreed to bury the reports of misconduct. In this 21 June 2018 letter, Bishop Rodriguez seems to imply that at some point, I considered the issues of misconduct to be a closed case. I never did. Nor did I agree to live at my parents’ home past my 4 June meeting on my future assignment. Rather, the Archdiocese in this letter is essentially telling me that I was to live at my parents’ home until I could say that the reports of child misconduct were a closed case. I never did.” (Emphasis is that of Fr. Nix)

The case of Chicago priest Father Paul Kalchik and some of his parishioners who burned a symbolic gay rainbow flag he found in the church’s storage, is another such tale of abusing the good and  priest. Fr. Kalchik, who was sexually abused by a priest, found the flag in storage. Kalchik said he had been advised by the archdiocese’s vicar for priests not to burn the flag. They did it anyway, and he was immediately contacted by Cardinal Cupich and told to pack his things in preparation for a lengthy psych evaluation at St. Luke Institute for his “psychiatric issues.” (yes, that Cardinal Blase Cupich who said in response to Cardinal Vigano’s 11-page letter, “The Pope has a bigger agenda. He’s got to get on with other things, of talking about the environment and protecting migrants and carrying on the work of the church. We’re not going to go down a rabbit hole on this.”)

The flag featured a cross superimposed over a rainbow, and had at one time been featured prominently in the sanctuary at his Catholic Church but had been taken down years ago and was forgotten in storage, the Chicago Sun-Times reported.  “That banner and what it stood for doesn’t belong to the Archdiocese or Cardinal Cupich. It belongs to the people of this parish who paid for it,” Kalchik said. “What have we done wrong other than destroy a piece of propaganda that was used to put out a message other than what the church is about?”

Rod Dreher has an extensive article on Fr. Kalchik and the history of the formerly gay parish of Chicago, and points out, “the rainbow flag he burned was not just any rainbow flag. It was one that Montalbano installed over the altar as a sign of that parish’s dedication to merging homosexuality and Christianity.”

Church Militant has more about Fr. Leatherby and the many scandals within the Catholic Church Deep State.

For many of my articles about Fr. Leatherby, visit my website, here, and here.