Early Christmas for LAUSD teacher: a refund of his UTLA union dues – and an end to future deductions

Just in time for Christmas, the Los Angeles teachers union gave Thomas Few some good news: a refund of $433.31 dues he paid and the union’s promise to stop taking $80 per month from his paycheck. 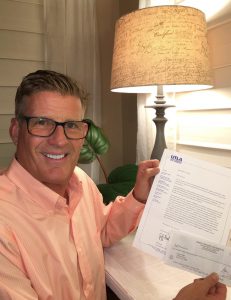 Few said he is “elated by the victory,” but also determined to press forward with his lawsuit against the Los Angeles Unified School District and United Teachers of Los Angeles.

“On June 27, the Supreme Court said government employees – including my fellow teachers in Los Angeles Unified – have the right to fund or to not fund union activities,” Few said. “Teachers shouldn’t have to make a federal case out of this.”

Beginning in June, Few told United Teachers of Los Angeles three times to stop taking cash from his paycheck. The third time, he says he placed a copy of his demand directly into the hands of a teachers union official visiting the San Fernando Valley school where Few teaches special-ed children.

But UTLA refused to stop taking his money. Then, on Nov. 13, the nonprofit California Policy Center and the Liberty Justice Center filed a federal lawsuit on Few’s behalf against UTLA and LAUSD. Two weeks later, UTLA did an about-face and sent Few the refund check.

The check came with a letter from UTLA executive director Jeff Good explaining that even though Good believes UTLA still has the right to take Few’s money, they are going to stop “rather than expend dues money on litigation.”

But payments to the union were another matter, Good wrote: Few had “signed a separate agreement with the union, apart from your agreement to become a member, committing [Few] to pay an amount equivalent to dues to the union ‘irrespective of your membership status.’”

California Policy Center CEO Mark Bucher, one of the attorneys representing Few, called that a “desperate attempt by UTLA to skirt the Supreme Court’s decision in Janus v. AFSCME.”

In that June 27 decision, the Supreme Court held that forcing government employees to join political organizations like UTLA violates their First Amendment rights.

“Arguing that Mr. Few can leave the UTLA as long as he continues to pay UTLA at the same rate is like a Vegas magician sawing a woman in half,” Bucher said. “It’s sleight-of-hand. In this case, it’s also deceptive and illegal.”

Bucher said the union’s capitulation does not end the federal suit, now scheduled for a February hearing in the U.S. Court in downtown Los Angeles.

“Even though UTLA has stopped taking money out of Mr. Few’s check, he does not intend on dropping the suit,” Bucher said. “Few is asking the court to declare that UTLA does not have the right to take his money, or the money of countless other teachers who are in the same position.”

Until his February hearing, Few said he’s focused on the spirit of the season. That means “spreading the good news to all of California’s government employees: you too qualify today for an end to dues deductions from your union.”

Then striking a lighter note, Few added, “With Christmas around the corner and the usual family expenses,” he says, “my wife and I are stoked to have our money back.”

Will Swaim is president of the California Policy Center.