The University of Diversity Will Destroy America

America’s educational system is breaking, and the primary culprit is the diversity bureaucracy, now an industrial strength special-interest group that grows more powerful and more expansive every year. For years they have dominated America’s social sciences and humanities, and now they’re launching an assault on the hard sciences. If they are not stopped, they eventually will destroy America as a first-world democracy.

They’re well on their way. But it isn’t “racism”—the currency of the diversocrats—that is denying opportunities to “people of color.” It is failures in the social culture of the inner cities, even more than aggregate economic disadvantages, or the lousy, unionized public schools, that result in the chronic academic underachievement of their children.

There’s no money to be made, or votes to be had, however, in telling this tough truth, even though it might do a lot of good if enough people said it or heard it. The commitment to “diversity” in American university enrollment is absolute and all-powerful, despite the incessant barrage of lavishly funded charges to the contrary emanating from the grievance industry. To achieve diversity, university admissions offices strive to achieve proportional representation by race, and to do that, they downgrade the significance of the single most predictive indicator of academic potential, the Scholastic Aptitude Test (SAT).

A 2015 Princeton study examined “how preferences for different types of applicants exercised by admission offices at elite universities influence the number and composition of admitted students.” They estimated that compared to white applicants, black applicants’ SAT scores are “boosted” by 230 points, Hispanics’ by 180 points, while Asian-American applicants have 50 points deducted. This systemic bias in favor of less-qualified students harms everyone concerned, and if unchecked, immutable demographic trends will magnify that harm.

It’s almost comical, and unfortunately, it’s also almost futile at this point, to try to parse the logic of “diversity” advocates because so far these arguments have prevailed. The denial of SAT scores as predictive of academic achievement has reached the point where a growing number of colleges and universities are dispensing with it altogether.

As reported in Forbes last year, the University of Chicago “has announced it is no longer requiring SAT scores of applicants, noting explicitly that it wants to increase minority student representation.” This is dangerous folly. Seeding our universities with less-qualified students will have a ripple effect on every aspect of higher education—the rigor of the courses, the mix (and usefulness) of the degrees on offer, the skills of the graduates, and the quality of both the faculty and their research. This has already begun.

In reality, “minority student representation” is not exactly what they’re trying to increase at the University of Chicago, or anywhere else. What they’re trying to do, in fact, is increase the representation of “underrepresented minorities,” i.e., blacks and Latinos. What about Asian-Americans? Aren’t they minorities? Apparently not. This chart explains why not, using College Board data. It reveals the profound ethnic disparities in SAT math scores among America’s 2015 college-bound seniors. 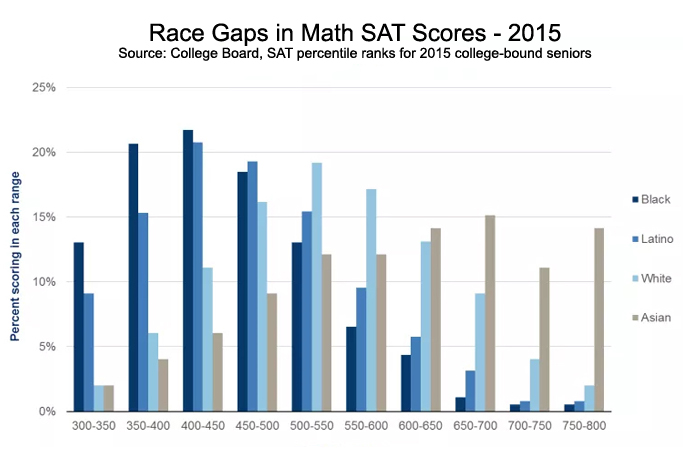 These are not subtle differences. Most striking is the disparity occurring at the extremes of the distribution. It is those whose abilities fall within these gifted extremes who, overwhelmingly, become the inventors and researchers whose breakthroughs ensure American technological preeminence and benefit the world. Note how nearly 15 percent of all Asians were able to score over 750 on their math SAT. Clearly, using SAT scores as criteria, Asians are indeed underrepresented in elite universities, but they are overrepresented in proportion to their percentage of the population, as they should be. In absolute numbers, 93 percent of all students achieving a Math SAT score of 750 or higher are either white or Asian, and 95 percent of all students achieving a Math SAT score between 700 and 750 are either white or Asian.

Why does this matter? Who cares if our elite universities, or any of our institutions of higher learning, for that matter, admit students based on their scholastic aptitude, or their Math SAT in particular?

One important reason would be to ensure that Americans have an adequate supply of graduates in so-called STEM fields: science, technology, engineering, and mathematics. Again, using College Board data, “about twice as many Asian as white, black, or Hispanic students enter STEM fields. Completion rates are lowest for black and Hispanic students, with only 16 percent of those in each of these groups who enter STEM fields earning bachelor’s degrees in these fields, compared to about 30 percent of the Asian and white students who enter these fields.”

One of the most erudite critics of race preferences in college admissions is Heather Mac Donald, a fellow at the Manhattan Institute and author of The Diversity Delusion. In a recent guest editorial in the Wall Street Journal, Mac Donald noted several problems with racial preferences beyond the indisputable fact that they deny opportunities to more qualified students. Racial preferences are not limited to elite university admissions. They happen across all levels of post-high-school education, from community colleges to elite universities. To achieve proportional representation, racial preferences are the only option. According to the National Center for Education Statistics, here are the average math SAT scores by ethnicity in 2015: white, 533; Asian, 602; black, 425; Hispanic, 453. For reading comprehension: white, 528; Asian, 529; black, 430; Hispanic, 448.

Most compelling is Mac Donald’s assertion that by systemically elevating less-qualified students into schools that otherwise would be more selective, these students are being condemned—at whatever level—to compete with better-prepared students. That is, a student who might excel in, and complete a STEM degree, at a state college, will end up dropping out or choosing a watered down fill-in-the-blank “studies” major at an elite university. Similarly, a student who might excel in a community college, then transfer successfully into a four-year college to earn a STEM degree, might fail and drop out if he is elevated to a state college straight out of high school where he will compete against better-prepared students.

Mac Donald also points out that by placing students into academic populations where they are demonstrably less qualified to meet the academic standards, their academic failures fulfill negative stereotypes, an outcome precisely at odds with what supposedly is the intent of policies that embrace “diversity.”

It’s relatively harmless to indulge the diversity bureaucracy’s self-serving rhetoric regarding the “merit myth” when “underrepresented minorities” truly are numerical minorities. For example, in 1965, America was 84 percent white, 11 percent black, 4 percent Hispanic, and 1 percent Asian. But by 2045, according to research from the Brookings Institution, also using U.S. Census Bureau data, America will be the 49 percent white, 13 percent black, 25 percent Hispanic, 8 percent Asian, and 5 percent multiracial. When it comes to education, however, 2045 is already here. The minority-white “tipping point” for Americans under 18 will be reached, nationally, by 2020. In many states, that point was reached years ago.

Forcing less-qualified applicants into positions where they are at a competitive disadvantage creates all kinds of havoc. It engenders bitterness and cynicism in the millions of more qualified individuals who are passed over. It creates insecurity and often leads to failure, among those who know they’ve been given opportunities and positions they were less qualified for. And at the aggregate level, long before quotas are extending preferential treatment to over 50 percent of the population, they become an issue of economic health, and even a national security issue, as entire academic institutions and entire industries are undermined in order to make room for less qualified people.

ETHNIC COMMUNITIES MUST STOP USING RACISM AS AN EXCUSE

The reality in America for at least the last three decades is that if an applicant for college admission, a new job, or a promotion, is nonwhite, he will get the job in preference to a white applicant with equal skills. This remains the only way to achieve anything close to proportional representation, and the practice is enshrined in countless federal and state laws, regulations, and tax incentives. Racism, if it still exists, does not exist in America’s institutions, which must bend over backward to be inclusive.

Moreover, even absent mandates, corporations have no incentive to engage in racial discrimination. Corporations survive by being competitive, and corporations stay competitive by hiring the most qualified individuals, regardless of their race.

With respect to college admissions, setting aside the easily discredited notion that SAT scores don’t mean anything, how can low scoring groups raise their scores? It might start by leaders in these communities spending more time trying to address the social failures afflicting those communities, and less time complaining about “racism.”

Two salient measures of a community’s health, which in turn affect the educational achievements of a community’s children, are gang activity and family status. The next chart, using data from the U.S. Department of Education, shows the incidence of gang activity in America’s high schools, as reported by students. Black and Hispanic students are more than twice as likely as whites and Asians to encounter gangs in their high schools. Gang activity is a reasonable proxy for the ambient culture being either conducive or detrimental to learning. 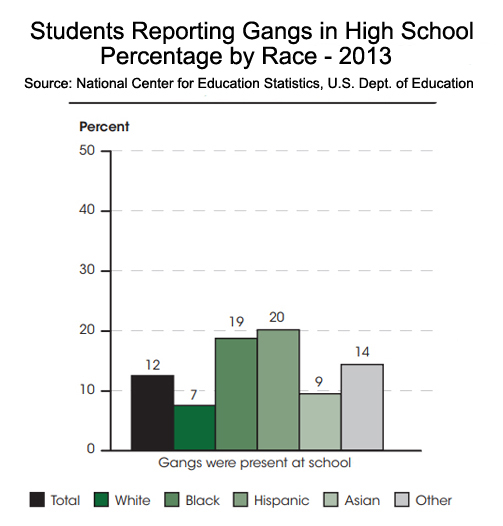 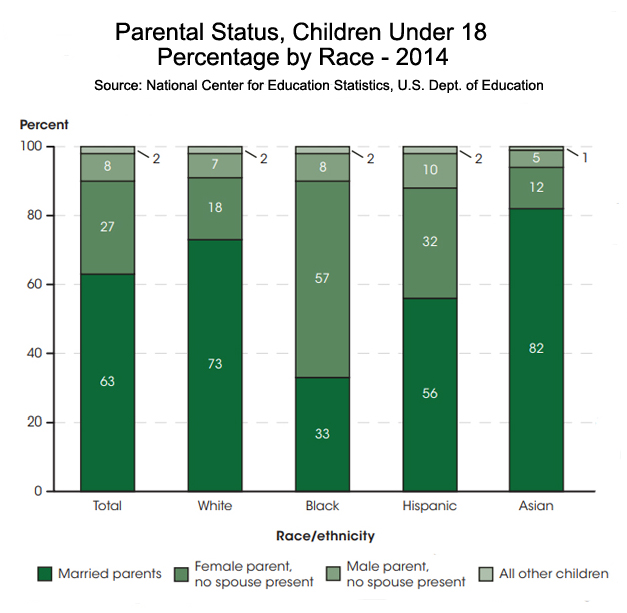 When parents—especially fathers—are gone, gangs often fill the void. But is it racism that causes families to break up disproportionately among blacks and Hispanics? And is it spurious to suggest correlation is also causation when common sense would support the notion that children in broken homes who go to gang-infested schools will not attain the same levels of achievement as students in intact homes with tranquil school environments?

It’s not fair to suggest that any individual family living in one of America’s inner cities can cope with an educational environment that deters learning as easily as a family living in a tranquil suburb. But individuals can choose to keep their families intact. They can choose work over welfare, to set an example for their children. They can choose to emphasize the value of an education and use the many resources available to them. They can also choose to participate in their communities, supporting the police who fight to curb gang activity. They can join with other parents to demand competent teachers in public schools, and end the labor union monopoly on education. They can demand school choice. They can take responsibility for all these things, and until they do, claiming “racism” is the cause of academic underachievement is just an excuse.

One demographic trend that may help throw a wrench into the diversity bureaucracy’s iron grip on academia is the proliferation of Americans of “mixed race.” In 2015, more than 17 percent of marriages in America were across “racial” lines. It’s daunting to imagine why ethnic voters would oppose racial quotas when racial quotas will increase their chances of college admission or a job promotion. But what happens when everybody can claim to be a member of a protected-status group? We are already seeing the Asian community’s reaction to being dumped out of the “underrepresented minorities” bucket. What happens when the diversocrats ability to aggregate in order to discriminate runs up against a population that’s gotten so intricately disaggregated that everything they try invites grassroots opposition from a growing coalition of voters, or, inevitably, lawsuits, which increasingly they will lose?

America has to move away from enforced proportional representation in all things, starting at the university. Meritocracy always reestablishes itself, one way or another.

This article originally appeared on the website American Greatness.

This entry was posted on Thursday, February 28th, 2019 at 1:00 am and is filed under Blog Posts, Commentary.