On June 27, 2018, the U.S. Supreme Court ruled in the case Janus vs AFSCME. An immediate consequence of this ruling was that public sector unions could no longer collect so-called “agency fees” from workers in their bargaining units who had opted out of full union membership.

The other main consequence of the Janus ruling was that those workers who were full dues paying members of public sector unions would have the right to terminate their memberships. In anticipation of a result unfavorable to them, which Janus certainly was, public sector unions have used their influence with lawmakers to pass numerous pieces of legislation designed to make it harder for union members to quit. As a result, the full impact of union members terminating their membership will not be felt immediately.

With nearly a year passed since the Janus case was decided, however, it is possible to begin to quantify the impact so far on union membership and on union revenues. It’s not at all an easy task. The mandatory disclosure requirements for public sector unions are minimal. Public corporations and private sector unions are both required to disclose much more information about their finances and operations than are public sector unions.

The table below shows, at a summary level, what we’ve learned from these four agencies. 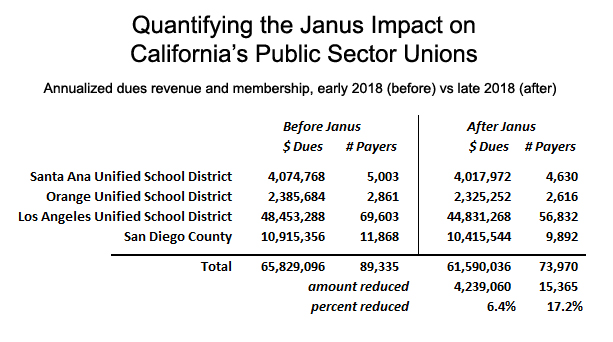 Before speculating on how this may translate into a statewide impact by extrapolating from these numbers, a few qualifying remarks are necessary. The columns headed by “# payers” include agency fee payers and full members. From the underlying details, some interesting facts emerged.

In the case of LAUSD, by far the largest agency, four bargaining units were summarized – the UTLA teachers union, the “Associated Administrators of Los Angeles,” the SEIU Local 99, and the CSEA bargaining unit. In all cases, the monthly payroll data used for “before Janus” figures were from January 2018. In most cases, the “after Janus” data was from November 2018 (in the case of CSEA, October 2018 was used). What the detailed data showed for all four unions was that agency fee payers and agency fee revenue ended in July 2018. The actual full membership numbers increased, in general, between January 2018 and November 2018, but not enough to make up for the agency fee payers who were lost. That is, these unions were not generally successful in converting their agency fee payers into full union members.

This same pattern was repeated when reviewing other agencies, although in most cases the only data provided was “total payers” which made it impossible to tell how many agency fee payers were lost in July 2018. It’s important cover this nuance, because it explains why the total drop in dues revenue, 6 percent, is only about one-third as great as the total drop in the number of payers, 17 percent. Many of those payers were not full members, paying full dues, but instead were agency fee payers, paying reduced amounts. One further complicating variable worth mentioning is the fact that some of these agencies were unable to differentiate between dues, agency fees, or payments to the union for other benefits such as supplemental health insurance.

In any case, if the experience of these four agencies is representative of what has happened in the rest of California’s unionized public agencies, it is possible to estimate the statewide impact so far of the Janus ruling.

California’s public sector unions collect and spend an estimated $800 million per year. If that amount has already dropped by 6.4 percent, than total union revenue has been reduced by around $50 million.

It is difficult to rely on this estimate. Did all of the unions have relatively similar percentages of agency fee payers? Did all of them convert a similar, and fairly low, percentage of their agency fee payers into full members? Are agency fees, as a percent of full dues, the same percentage in the rest of California’s bargaining units as they were inferred to be in these cases? For that matter, it’s not even that easy to estimate the total dues revenue of California’s public sector unions. Our current estimate of $800 million per year, released last summer, required revision after the California Policy Center received feedback from some of the public sector unions included in the estimate. It would be nice, of course, if California’s public sector unions would simply disclose their membership numbers and dues revenue. And if wishes were horses, beggars would ride.

In almost any other context, reducing by $50 million the annual revenue of a network of political players, especially at the state level, would be a catastrophe for the organizations involved. But this is California, and these are public sector unions. Losing most of their agency fee payers clearly had a permanent and significant impact on union revenues, but for them, and only them, it might be most accurately described as a one-time loss of manageable proportions. The bigger impact that the Janus ruling might have regards what is going to happen to their rates of full membership. It is now possible for public sector union members to quit their unions, but will they? And if they want to, will the unions be forced to make that an easier process?

Some of the tactics the unions have adopted to make the process of quitting more difficult are being challenged in court. These cases would include Uradnik vs IFO, which would take away a public sector union’s right to exclusive representation, or Few vs UTLA, which would nullify many steps the unions have taken to thwart the Janus ruling. How those cases play out, and whether or not public sector unions can remain accountable enough to their members to keep them in voluntarily, remains to be seen.