City of Oxnard Pension Contributions Set to Double by 2024

As reported by the Ventura County Star, the City of Oxnard faces budget headwinds. Quoted in the article, Mayor Tim Flynn had this to say:

“We’re making decisions that should have been made 10, 20 years ago to put the city on a sustainable path,” Flynn said. “These are very painful cuts, but we have to live within our means. The city historically has not lived within our means.”

“Skyrocketing pension costs and spikes in health care are some of the reasons for the budget shortfall. With projected expenditures approximately $10 million more than anticipated revenue, there is no choice but to recommend programmatic cuts to the City Council.”

Skyrocketing pension costs. You can say that again. Depicted on the chart below is a summary of what’s happening to Oxnard, thanks to “skyrocketing pension costs.” The biggest takeaway from this chart is the fact that Oxnard’s pensions have just begun to “skyrocket.” If you want to skip the details and cut to the chase, view the yellow highlighted figures in the middle and at the bottom of the right column.

The first highlighted numbers show how much Oxnard had to pay CalPERS (not including employee contributions through withholding) back in 2017. Back then, it cost them $23 million. Now look to the bottom of the chart, to see what these pensions are going to cost the city in 2024 – nearly twice as much at over $45 million. 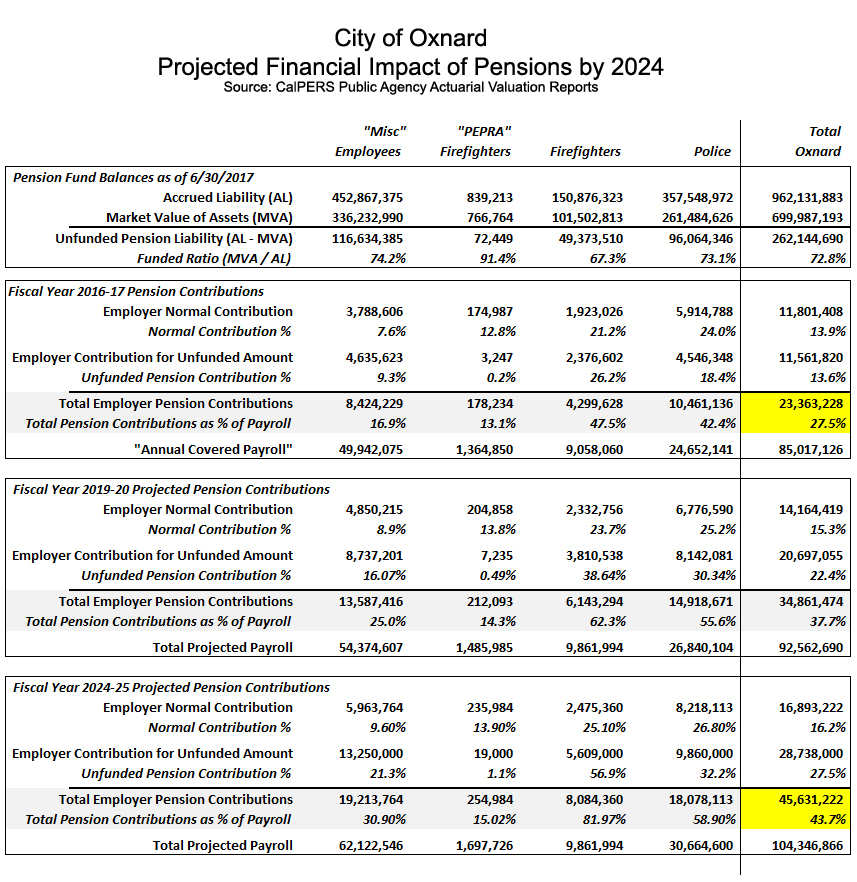 The numbers on this chart were taken directly from CalPERS “Public Agency Valuation Reports,” in this case, for the four participating employee units (miscellaneous, “PEPRA” firefighters, firefighters, and police). The fifth column is merely the sum of the first four. The only numbers which had to be inferred were the payrolls for the two firefighter units, since, inexplicably, CalPERS didn’t provide those numbers. But they were simply escalated at the same moderate rate that CalPERS had used for the miscellaneous and police units.

The numbers on this chart provide a lot of sobering information. Oxnard’s pension costs are going to increase from 27 percent of payroll in 2017 to 44 percent of payroll by 2024. In actual dollars, as noted, the payments will double. It is critical to understand as well that these estimates from CalPERS do not take into account a slowdown in investment returns. If that happens, the increases could be much higher.

Something always important to point out is that most of the increase in Oxnard’s payments is to increase the so-called “unfunded contribution” – these are the catch-up payments pension system clients have to make to reduce their unfunded liability. Note (right column, just above the first set of yellow highlighted numbers) that in 2016-17 the “normal contribution” was $11.8 million and the “unfunded pension contribution” was slightly less, at $11.6 million. Then skip to the numbers just above the lower set of highlighted numbers, to see these amounts projected for 2024-25. The normal contribution is up sharply, increasing 43 percent to $16.9 million, but the unfunded pension contribution is up 150 percent, to $28.7 million. There’s a reason for this.

For years, the unfunded liability of pension funds, everywhere in California, grew faster than they were being paid down. Overly optimistic rates of return and “creative” repayment schemes (remember the negative amortization mortgages?) caused this, and everyone looked the other way. Budget directors and councilmembers accepted creative accounting gimmicks because they didn’t have enough money in their budget to pay any more to CalPERS than they absolutely had to. Union leadership knew that pension reforms only required employees to increase their payments (through payroll withholding) on the normal contribution, and that the unfunded contribution was the sole responsibility of the taxpayer.

Oxnard’s dilemma is not unique. Every city and county in California, with rare exceptions, is coming to terms with this crisis. But will Oxnard renegotiate pensions, that third rail of public employee entitlement? PEPRA, while helpful, only applies to new hires and will take decades to have an impact. Reform via lowering of pension benefit accruals just for future work has been struck down repeatedly in court, even though it was just fine when pension benefits were enhanced retroactively for past work. As for bankruptcy? Why bother? Wherever that’s been tried – Vallejo and Stockton come to mind – the bond investors got tanked and the pensions were untouched.

Oxnard, like every other city and county in California, will continue to raise taxes and cut services to make their pension payments. But have a look at the salaries and benefits that Oxnard’s unionized public employees receive. Have a look at the pensions Oxnard’s retirees are collecting. And on top of that, ask whether or not city’s planned “painful cuts” will include cutting their supplemental retirement plan administered by PARS. This is discussed on page 108 of the city’s most recent financial report. The supplement creates an unusual 3% at 60 benefit formula for miscellaneous (i.e., non-safety) employees. Because the pensions they’re getting, which average more than most Californians in the private sector make while working full time, are not enough.

It is time for a state ballot initiative to revise the state constitution to permit real, lasting, financially sustainable pension reform.

Edward Ring is a co-founder of the California Policy Center and served as its first president.