For years California has been ground zero for the resistance to all things conservative, and to all things Trump. Because one-party rule always lacks accountability, California’s leadership, all Democrats, have pursued one extreme policy after another, conservatives and common sense be damned.

But as the country prepares for critical elections next year, a new nonprofit group has formed with hopes of leveraging The Resistance against itself. Reject The Resistance plans to actively engage voters in states outside of California, warning Americans not to follow the lead of California’s political leadership, urging voters “Don’t Californicate America.” 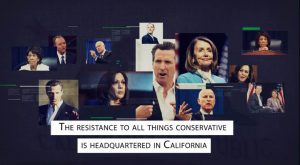 While the politics of the resistance might generate supportive headlines, the policies that are advanced in California would be a disaster for the country. The new nonprofit group will urge voters to take a look at the ideas advanced by California’s leadership and see the mess they have made of the state.

Reject The Resistance has launched a television ad that it plans to air in key states, and has unveiled a website setting forth some of the policies that it says could be pursued if voters reject a conservative approach to government. The advertisement highlights many of California’s problems including rampant homelessness and drug abuse, filthy cities with streets soiled by urine and feces, sanctuary cities, crime, rising taxes and out of control government spending and debt.

What are some of the ideas coming from the Democrats out of California? They range from the plainly dumb, to the mind-boggling to the deadly dangerous.

Only in California would political leaders propose medical marijuana for pets, and suggest people purchase a state permit to eat roadkill.

Unfortunately, California’s failed ideas don’t stop with the plainly dumb. They include mind-boggling ideas such as providing free health care for illegals but not for citizens, and distributing hundreds of thousands of plastic syringes to drug users every month in Gavin Newsom’s San Francisco – most of which end up littering neighborhood parks and streets – while banning the use of plastic straws to save the environment. Just this week, California prevented schools from suspending disruptive and unruly middle school and junior high students who defy school authority.

Even worse, California has enacted deadly dangerous policies, such as letting violent criminals out of jail, prohibiting law enforcement from cooperating with federal immigration authorities to contain dangerous criminals, and ensuring that brazen teen-age killers are released into communities no later than age 23.

Virtually every major idea being advanced by Democrat candidates for president have their origin in the policies of California. From Medicare for All, to the Green New Deal, to Sanctuary Cities and open borders, all of these ideas have their genesis in California. These Democrat presidential candidates come here for endorsements, money and votes. They own California’s failed ideas.

I’ve worked all over the country, including in many states that are critical in the outcome of a presidential race. I can say with confidence that the people of Iowa and New Hampshire, of Michigan and Pennsylvania, of Colorado and Minnesota, and of North Carolina and Florida are not going to be very supportive of dumb, mind-boggling and dangerous ideas emanating from The Resistance in California.

Reject The Resistance hopes to illustrate to Americans that they don’t need to wonder what will happen to America should voters reject a conservative approach to government and elect any of the leading Democrat candidates. All they need do is look at the mess that California is in as a result of the terrible policies that have been advanced by the state’s political leadership.

Those policies have made the state unaffordable for most, and increasing are making it unlivable for many. Once voters figure that out, they will not want to Californicate America.

Frank Schubert is the Founder of Reject The Resistance. He has twice been named America’s top public affairs consultant.