How Much Will YOUR City Pay CalPERS in a Down Economy?

When evaluating the financial challenges facing California’s state and local public employee pension funds, a compelling question to consider is just how much more will they demand from their clients in the next economic downturn?

What is alarming in the case of CalPERS and other public sector pension funds is the relentless and steep rate increases they’re already demanding from their participating employers. Equally alarming is the legal and political power CalPERS wields to force payment of these rate increases even after municipal bankruptcies where other long-term debt obligations are diminished if not completely washed away.

San Marino’s Payments to CalPERS Will Nearly Double by 2025

The City of San Marino, a small Southern California town with barely 13,000 residents, nonetheless offers a typical case study on the impact growing pension costs have on public services and local taxes. Using CalPERS own records and official projections, the City of San Marino paid $3.0 million (not including employee contributions) to CalPERS in their fiscal year ended 6/30/2017. That was equal to 32% of the base salary payments made in that year. By 2025, the City of San Marino is projected to pay $5.1 million to CalPERS, equal to 46% of base pay.

Can the City of San Marino afford to pay an additional $2.1 million per year to CalPERS, on top of the $3.0 million per year they’re already paying? They probably can, but at the expense of either higher local taxes or reduced public services, or a combination of both. But the story doesn’t end there.

The primary reason required payments to CalPERS are nearly doubling over the next few years is because CalPERS was wrong in three critical estimates: how much their pension fund could earn, how much would be paid to retirees, and how much their client agencies had to pay to stay current or catch up. They could still be wrong. 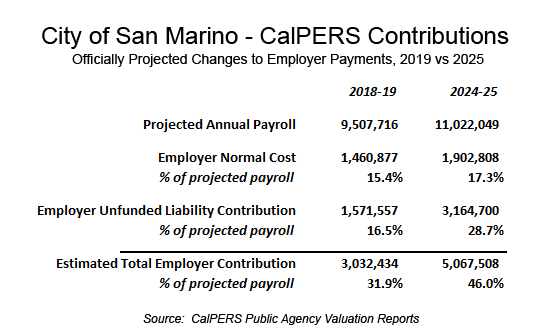 Annual pension contributions are are split into two categories:

(1) How much future pension benefits were earned in the current year, and how much money must be set aside in this same year to earn interest and eventually be used to pay those benefits in the future? This is called the “normal contribution.”

(2) What is the present value of ALL outstanding future pension payments, earned in all prior years by all participants in the plan, active and retired, and by how much does that value, that liability, exceed the amount of money currently invested in the pension fund? That amount is the unfunded pension liability, and the amount set aside each year to eventually reduce that unfunded liability to zero is called the “unfunded contribution,” or, in plain English, the catch-up payment.

Both of these annual pension contributions depend on a key assumption: What rate-of-return will the pension fund earn each year, on average, over the next several decades? And it turns out the amount that has to be paid each year to keep a pension system fully funded is extremely sensitive to this assumption. The reason, for example, that CalPERS is doubling the amount their participating employers have to pay each year is largely because they are gradually lowering their assumed rate of return from 7.5% per year to 7.0% per year. But what if that isn’t enough?

If the Rate-of-Return CalPERS Earns Falls, Payments Could Rise Much Higher

It isn’t unreasonable to worry that going forward, the average rate of return CalPERS earns on their investments could fall below 7.0% per year. For about a decade, nearly every asset class available to investors has enjoyed rates of appreciation in excess of historical averages. Yet despite being at what may be the late stages of a prolonged bull market in equities, bonds, and real estate, the City of San Marino’s pension investments managed by CalPERS were only 74% funded. As of 6/30/2017 (still the most recent data CalPERS currently offers by agency), the City of San Marino faced an unfunded pension liability of $29 million.

As it is, using CalPERS own estimates, by 2025 the City of San Marino is already going to be making an unfunded contribution that is nearly twice their normal contribution. Another reason for this is because CalPERS is now requiring their participating agencies to pay off their unfunded pension liabilities in 20 years of even payments. Previously, in an attempt to minimize those payments, agencies had been using 30 year payoff terms with low payments in the early years.

San Marino is a wealthy community. The median household income of $147,960 is more than twice the median for California of $67,739 (ref. City-Data.com, figures for 2016). But with total municipal expenses of $26.2 million in the fiscal year ended 6/30/2017 (ref. San Marino CAFR, page 10), even San Marino’s budget can be stressed by pension expenses. CalPERS has projected the city’s pension contribution will rise to $5.1 million by 2025, which is 19 percent of total expenses.

At what point do these payments become too burdensome? What if investment returns settle down to an average of only 6 percent per year – can San Marino afford to pay CalPERS the resulting estimate of $7.0 million per year? What about at an even lower 5 percent return – can San Marino afford to pay CalPERS an estimated $8.5 million per year? And what about the employees? Will they start to pay more via payroll withholding? In 2017-18, employees only contributed $767,000 out of $3.8 million.

What about the rest of California?

How would a downturn affect all of California’s public employee pension systems, the agencies they serve, and the taxpayers who fund them? In a CPC analysis published in 2018, “How to Assess Impact of a Market Correction on Pension Payments,” the following excerpt provides an estimate:

That’s a lot of billions. And as already noted, a 15% drop in the value of invested assets and a reduction in the estimated average annual rate-of-return from 7.0% to 6.0% is by no means a worst case scenario.

To-date, meaningful pension reform has been thwarted by powerful special interests, most notably pension systems and public sector unions, but also many financial sector firms who profit from the status quo. Ongoing court challenges, along with growing public pressure on local elected officials, may eventually offer relief. For these reasons, raising taxes and cutting services in order to fund pensions may eventually become a false choice.

This entry was posted on Wednesday, October 2nd, 2019 at 2:00 am and is filed under Blog Posts, Commentary.