Rick Perry might not have officially thrown his ten-gallon hat into the ring, but he certainly looked and sounded like a presidential contender when he stopped by Orange County yesterday morning.

Hosted by Orange County GOP Chairman Scott Baugh and the illustrious editor of this web site, Jon Fleischman, Governor Perry drew a stark distinction between himself and other presidential candidates by coming to Orange County to meet with conservative grassroots leaders—not just big money donors.

Unfortunately, California is often viewed as a lost cause for Republican presidential candidates. They see the state as an ATM for campaign cash, but don’t really return the investment by actively wooing voters or building an enduring political infrastructure. In Perry’s case, he seems genuinely interested in building the conservative movement by working with conservative grassroots leaders. 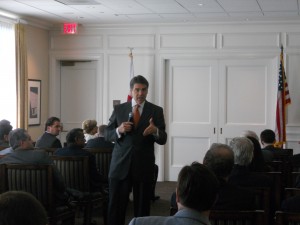 During an hour-long meeting with the select group of conservative leaders, the Texas governor discussed his recipe for success in growing the Lone Star State’s economy—and how that recipe can be applied on a national level.

Governor Perry detailed the principles that he believes have led to Texas creating more jobs than any other state—all while the nation is losing millions of jobs. First, Texas has no personal income tax and fair tax system. Second, it offers businesses a regulatory environment that is fair and predictable. Third, Texas implemented tort reform that prevents the overly litigious from abusing the legal system. In fact, Perry said that he just signed a loser-pays law that will help rein in frivolous lawsuits.

Perry beamed with pride as he announced that only three Texas budgets since World War II have reduce the spending level of the previous year—and he signed all three. In fact, the state now has $6 billion in a rainy day fund for future downturns in the economy.

Throughout the talk, there were a few jabs at California and just how different an approach the Golden State has taken in addressing governance and restoring a flailing economy. As the governor talked about all the successes of Texas, members of the group kept nudging each other, murmuring, “Wish we could do that here!” or, “That would never happen in California.”

Governor Perry shared that he and his wife Anita, who was at his side, love California, for its beauty and the amazing weather (“We have weather like this in Texas—for two days a year!”). Echoing a favorite quip of Congressman Tom McClintock, Perry joked that only government could cause the mass exodus of people from such a gorgeous land.

The most refreshing aspect of Perry’s discussion was not primarily his position on any given issue—it’s his laser-like focus on states rights. Instead of dictating how Texas, California or any one of the other 48 states should deal with controversial or even mundane concerns, he believes each state should decide for itself. That’s a position not often articulated by presidential candidates—at least not since Ronald Reagan.

This view of federalism will appeal to the Republican Party’s tea party base. But it will also appeal to the always-coveted independents. After all, for the past 3 years they’ve experienced first hand the dictatorial hand of government telling them they must purchase health insurance and they must abide by more onerous regulations for their businesses.

Perry used the opportunity of discussing the 10th Amendment states rights issue to plug his book “Fed Up,” in which he outlines his vision of a smaller federal government and maximum independence among the states. He joked with his audience that if a state like California wants to experiment with legalizing marijuana, he doesn’t agree, but he will defend that state’s right to govern itself.

Rick Perry-led Texas has bucked this trend toward an oppressive, meddlesome government by doing the opposite: establishing an environment that fosters business growth and individual liberty. As Perry explained during his presentation, he firmly believes that when government gets out of the way, the private sector can and will meet the challenges facing society.

Asked about how Republicans can capture more of the Latino vote, Perry explained that Hispanics are just like any other voter: they care about their families and they care about being able to run their businesses without government intervention. He took the opportunity to once again excoriate the current administration for its meddling in the economy. “How many times do we have to try these John Maynard Keynes experiments before we figure out it doesn’t work?” (Music to the ears of Hayak fans!)

He also explained how he went from being a Democrat to a Republican in 1989 while serving in the Texas state legislature. He came from a family of fiscally conservative Democrats who, during the Reagan Administration, discovered that the principles he espoused and applied where the very principles they believe. Perry said that the day he became a Republican he made both parties happy.

Perry also praised his fellow Republican governors like Scott Walker in Wisconsin, John Kasich in Ohio and Rick Scott in Florida for making the difficult decisions that will put their states back on the road to balanced budgets and prosperity.

For the past three years America has endured the leadership of a man who had no executive experience prior to his election. He had no case studies to present to voters on how he had led a state or made difficult decisions. As a result, the economy has faltered and the country has suffered. Amidst the abysmal economy, Texas has been the lone bright spot. This contrast between the failed leadership of Barack Obama and the tremendous success of Texas will be Perry’s strongest appeal to voters. In choosing their president in 2012, voters shouldn’t just ask, “Am I better off now than I was four years ago?” They should ask themselves, “Would I be better off living in Texas?” If the answer is yes, Rick Perry will be sharing his Texan recipe for success with the rest of the country.