Who is George Joseph? – Last Of The Fighting Capitalists 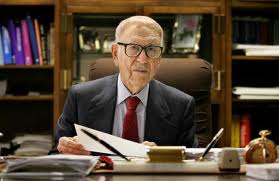 Ronald Reagan was served by giants of capitalism. Reagan’s famous Kitchen Cabinet was composed of self made entrepreneurs, ranging from Henry Salvatori and CC Moseley to Holmes Tuttle and Justin Dart. None were born rich. They loved America and helped give the world Ronald Reagan.

George Joseph, founding CEO for Mercury Insurance, announced today that he was spending some  $8.1 million to promote an initiative that would give more choice to auto consumers to buy car insurance at lower rates. His initiative seems reasonable.

According to the Los Angeles Times Joseph will gather some 750,000 thousands signatures to change the law to allow more competition, for this June’s election in 2012. But who is George Joseph?

Joseph was born in West Virginia (same as Henry Salvatori) in 1921, the son of Lebanese immigrants. During World War II he fought as a B-17 navigator flying some 50 missions. Then Joseph got degrees in math and physics from Harvard University. By 1954, while working on a day job, he also sold  life insurance door to door during his off hours. In 1962 Joseph opened a radically new insurance carrier called Mercury Insurance. Presently it is one of largest carriers in California.  Joseph works every day as Chairman of the Board. Now, he is involved in a major political campaign.

Contrast this to our friends at Amazon.com. Amazon was burned by the Dem legislature to collect taxes for the insatiable California unions. Amazon initially refused and collected referendum signatures to abolish that law. But last week Amazon made a deal with the people who hate them. The Dems will give Amazon a year without forcing it to collect taxes – to give Amazon time to get a law from Congress to protect them.

I wonder what George Joseph would do if he was running Amazon?