To Save the Planet, Build Bigger Freeways

If you live in California, then you know just how irritating traffic can be. The traffic is so bad–especially in Los Angeles–that Carmageddon seems like a more appropriate term for daily commute times. For years Californians have been warned by the environmental elite that it’s because of our addiction to the fossil fuels that power our vehicles that our environment is crumbling. To try and “save” the planet, the environmentalists in charge of California government have passed draconian measures such as AB 32 to control or behavior and conform it to their vision of a utopian society (i.e., a society where they tell us what to do instead of allowing us to live in freedom).

Well, what if it was bad government–not average citizens’ behavior–that’s causing the problem?

A study published by the Texas Transportation Institute indicates that it’s California’s lack of infrastructure that’s causing huge problems for the economy and environment. The study looked at 328 of the most trafficked freeways in America. Unsurprisingly, California has 7 of the top 10 most congested freeways in the nation and 72 percent of the wasted fuel amongst the top 10 freeways. Researchers estimated this equates to 38 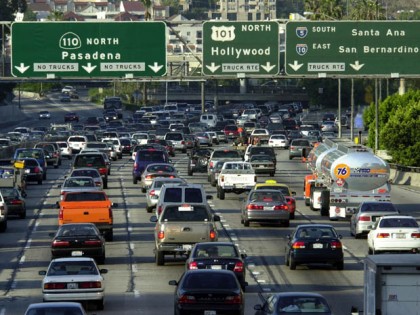 While LA is notorious for its road-rage inducing traffic quagmire, it seems government has done little to remedy the problem. I’ve lived in or near LA for the last two years and I constantly find myself sitting in traffic wondering aloud why government doesn’t do something about it. I was recently in Texas and marveled at how clean, nice, new and efficient their roadways were compared to those in California. Driving down the 101 or 10 in some areas looks like a third world road system with all the cracks, potholes and trash. It’s really a microcosm of just how different the two states are: one is thriving and providing infrastructure for its citizens while the other is pushing its workforce (and tax base) out because of government’s inefficiency.

This traffic study confirms that California’s government is failing in its most basic responsibility: providing the infrastructure necessary to foster a prosperous, healthy society.  Environmentalists would have us believe that it’s our evil cars that are causing global warming. Their solution is to curtail our freedom and drive us out of our cars. But if people weren’t idling in their cars in traffic, wasting hundreds of millions of dollars in wasted fuel and lost work hours, California would be a lot better off. We could get to work faster–contributing to economic recovery, we’d save billions in wasted gas, and we’d help save the environment by not burning all that fuel lost in traffic jams.

So if environmentalists want to save the planet and help get the economy moving again, they should abandon their red herring AB 32 regulations and start thinking about how to rebuild the state’s crumbling freeway system.

2 Responses to “To Save the Planet, Build Bigger Freeways”