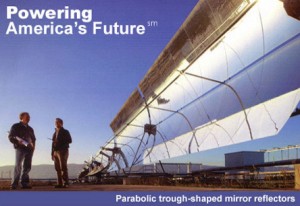 Reports just published that a $1 billion showcase solar energy project under construction may be threatened by old bones and sick foxes.

Taxpayers will get stuck with this Obama Stimulus monster. The 250 megawatt plant, being built by the Federal Bureau of Land Management is backed with an $825-million Department of Energy loan guarantee.

“Native” Indians from a nearby reservation are trying to muscle in to get their piece, claiming they have some relationship with the pre-historic settlement. When it was likely their ancestors were responsible for the ancient settlement’s—violent demise.

The article didn’t explain who was representing the the distempered kit foxes.

Of course, no mention was made as to other wack-job enviros who will fight against any transmission lines being built to provide the expensive power—if the plant ever get built.

This story nicely illustrates so many lessons of what’s wrong with Obama, the Federal Govt and democrats in general.