It’s tragic how some desperate states experiencing runaway state government spending are raising their income taxes to soak the rich.  But for those states such as California, it’s MORE tragic that many other states are now moving to cut or eliminate their state income tax on corporations and/or individuals.  This little-reported tax cutting trend rates wider publicity.

Why would states CUT their income tax collections? Could it be that they want our refugee millionaires and businesses, and don’t want to lose theirs? Or maybe they are just stark raving mad (the dismissive liberal explanation). 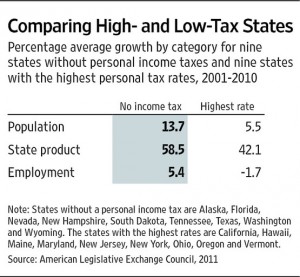 RIDER CONCLUSION:  Liberal activists will not be dissuaded from their Jihad against the wealthy — it’s as much about punishing the rich as it is about raising more revenue. But many less myopic California voters will likely find this information illuminating — and unsettling.

One Response to “Several states cutting or eliminating their income tax”