How Many Communists Are In Congress From California?

In 1952, Whittaker Chambers explained to the world in “Witness,” that there is a type of fellow traveller, “so far within the fold that his not being a Communist would be a mistake on both sides.”

For decades, Progressives in Congress have made it all but impossible for Americans to avoid making that mistake.  Let’s take a look at California’s own traveling band.

In 1983, when the U.S. Invaded Grenada, one of their government documents the Americans seized detailed an unusual government meeting: “Barbara Lee is here presently and has brought with her a report on the international airport done by [Congressman] Ron Dellums. They have requested that we look at the document and suggest any changes we deem necessary.  They will be willing to make changes.”

At the time, now-Congresswoman Barbara Lee was a top aide to her predecessor in office, Rep. Ron Dellums.  The document in question was a report written by Rep. Dellums, arguing that Grenada’s airport was being built for benign uses. When Ronald Reagan liberated Granada, we found communist officials from East Germany, Poland, North Korea, Cuba and the Soviet Union. It was a nice COMINTERN gathering. And, historically Granada was the high point of the communist ascendency. Until then Lenin’s proposition that Communist was inevitable was correct in that the Soviet Union never lost an inch of territory until Reagan sent in the marines. Naturally, this defeat help lead to the dismantling of the Soviet Empire.

That wasn’t the only document the Americans found on the island. Another was the diary of Grenada’s defense minister, which stated: “The Revolution has been able to crush counter-revolution internally.  Airport will be used for Cuban and Soviet military.”

In a 2009 trip to Cuba, Rep. Lee was praised by Fidel Castro, who said, “I admire her combatant spirit and capacity for struggle.”

It seems that Cuba holds a special place in the hearts of many of our fellow travelers.

In September of 1998, Rep. Maxine Waters wrote an apologetic note to Fidel Castro. In it, Waters explained how she had been duped by Republicans into voting for a measure that called for the extradition from Cuba of Assata Shakur, who as a member of the “Black Liberation Army,” murdered a policeman in 1973.

Waters led her first delegation to Cuba in 1999.

Two Cuban-American members of the Congressional Hispanic Caucus quit the group in protest in 1996 after Rep. Xavier Becerra took a trip to Cuba.  Rep. Lincoln Diaz-Balart said that he would not contribute membership dues to the caucus until Becerra “demonstrates minimal respect for the rights of Cubans to be free and calls for free elections for that oppressed island.” Becerra travelled back to Cuba, to meet with Raul Castro this February.

Rep. Bob Filner is running for Mayor of San Diego

Rep. Bob Filner, the Democratic candidate for Mayor of San Diego – and long-time darling of the Democratic Socialists of America – made his own trip to Cuba in 2002, where he dined with Fidel Castro, and listened to Carole King serenade the tyrant with “You’ve Got a Friend,” while sipping California wines. 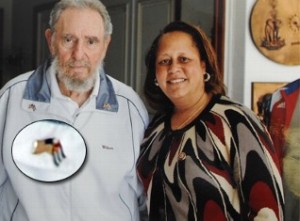 Rep. Laura Richardson got a special treat on her trip to Cuba in 2009, getting the chance to take a photo with Fidel Castro. Rep. Karen Bass, made the pilgrimage in June of 2011. No word on wine or pictures.

And non-communists aren’t the only ones who seem to mistake our travelers with the real deal.

The Communist Party USA cited Rep. Becerra as a success story in its “2010 Special Convention on Mexican American Equality.” They also celebrated the 2002 election of Rep. Linda Sanchez, and implied that the Party had helped lead her to victory. Rep. Richardson, of Castro-photo fame, also got a shout-out from Communist organizer Rosalio Munoz at the CPUSA’s National Committee meeting in July of 2007.

Other CPC members to get cheers from CPUSA are Leftist stalwarts George Miller, Lynn Woolsey, and relative newcomer Judy Chu. Rep. Chu, while never having been to Cuba, is cited by KeyWiki as having been an executive committee member of the Federation for Progress, a Marxist front group, in the 1980’s.

As we close in on the 2012 election, the battle lines are already drawn.  In November Americans will vote for either more government, or more opportunity.  We will choose whether government exists to expropriate the wealth of the few, or to protect the freedom of the many.  Best to think twice before hitching a ride with California’s traveling band.

One Response to “How Many Communists Are In Congress From California?”