The House Foreign Affairs Committee Is In Strong Hands With Royce

This week House Republicans gathered and, among other things, confirmed Orange County Congressman Ed Royce to be the new Chairman of the House Foreign Affairs Committee.  In making this decision, the 113th Congress will convene in January with one of the most qualified, hard working, and committed conservatives in the House of Representatives at the helm of this key committee with oversight of the federal government’s role and legislation impacting the foreign affairs of the United States. 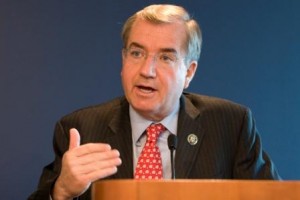 To meet Ed Royce for the first time, you might immediately assume that he must be a freshman.  Because the high energy level and excitement that he has for his role as a Congressman really come across, and as you start to talk with him, you are struck with admiration for his fierce love of this country, and his outright optimism for its future.  If you spend more than a little time with the California Congressman in his 10th term in the House, it becomes pretty evident, pretty quickly, that Royce is an ideologue and an intellectual, with a strong aptitude for public policy.  When I first met Royce back in the late 1980’s, he gave me my first copy of former Arizona Senator Barry Goldwater’s The Conscience of A Conservative, and also shared with me for the first time a magazine called National Review — both publications were foundational (and in the case of the latter, still is) in his political thinking.  Shaping Royce’s view of the role of the federal government both here in America as well as abroad is a belief in limited government, a deep understanding of the intent of our nation’s founders, and an understanding that this country stands out among all of those in the world, going back to the beginning of recorded civilization, for its commitment to liberty and to freedom.

In the many years that Royce has served on the Foreign Affairs Committee, which he joined upon his first being sworn into the House in January of 1993, the Congressman has developed a strong reputation as a serious leader in the foreign policy arena.  While many in Congress are generalists in a great many areas, when it comes to this area of jurisdiction, Royce is acknowledged as an expert.  He has been serving as the Chairman of the Foreign Affairs Subcommittee on Terrorism, Nonproliferation and Trade.  But he also served as Chairman of the Subcommittee on Africa for eight years — and has served for many years on the subcommittee on Asia and the Pacific.  Royce has traveled to many countries, no doubt leaving many key foreign leaders impressed with his acumen and understanding of the complexities of the issues that dominate the foreign policy arena.

Royce’s expertise on issues such as the global threat posed by Islamic terrorism (including the ideology that inspires terrorism as well terrorist financing), his in-depth knowledge of current affairs across the globe with a keen understanding of how all of it impacts the United States, and his deep understanding of foreign trade issues have made him a valued adviser to the administration, to House Leadership, and to important agencies within our government with jurisdiction over foreign policy.

Congressman Royce becoming Chairman of the Foreign Affairs Committee couldn’t come at a more critical time for the nation and the world.  At a time when we all have reason to question the kind of foreign policy leadership that will be exhibited by President Obama and Secretary of State Clinton, and with John Kerry serving as Chairman of the U.S. Senate Committee on Foreign Relations, Royce will be providing the “adult supervision” — along with the team he will be leading at his committee — for United States foreign policy.  That should reassure everyone reading this column.

It is worth mentioning that while Royce will clearly be focused on America’s foreign policy issues with this new Chairmanship, he is also known for his acumen in fiscal policy issues, and is considered to be one of the leading Republicans on the House Financial Services Committee.  Royce is a pro-growth leader in Congress, consistently scored high marks from the Club for Growth, Heritage Action, Americans for Tax Reform and other groups that subscribe to the idea that federal government should step back and let free markets and free minds create wealth and increase prosperity for all Americans.  Royce has been recognized for his leadership in fighting against profligate federal spending, including pork-barrel spending.  He is also a strong political leader within the Republican Party, serving in leadership roles with the National Republican Congressional Committee and the California Republican Party.  He is one of the top fundraisers in Congress, spending those funds to help Republicans to build and maintain their majority in the House.

For the next six years under Royce’s watch you can be sure that United States foreign policy will be under a microscope using only one criteria — does the policy in question serve the just interests of the United States of America?  And that’s a good thing.