When the going gets tough, the tough go shopping. But not in downtown Sacramento. There isn’t anyplace to shop in Sacramento’s downtown any more, other than the one remaining Macy’s in the wilting Downtown Plaza shopping mall. But even that store is on the chopping block, should Mayor Kevin Johnson’s vision of a “world-class city” with a downtown arena, actually come to fruition. 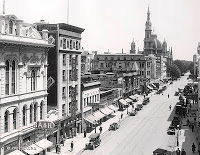 But now, there is yet another new plan to “save” downtown and the K Street Mall.

K Street, along with J Street, was Sacramento’s original main street, chosen because it was the most direct route to Sutter’s Fort from the river.

During the gold rush, K Street became the main business street. Dry goods stores and hotels appeared along K Street to sell goods to new arrivals and miners. Many of Sacramento’s first fortunes were made selling goods to the miners, not out in the gold fields, according to the Sacramento County Historical Society.

“In its heyday, K Street was also the home of numerous drugstores, tailor shops, tobacco shops, book- stores, restaurants and professional offices,” SCHS said. “Conveniently located at the center of town, thousands of people could walk to K Street from their neighborhood or ride the streetcars from Oak Park, Colonial Heights, East Sacramento, Curtis Park, Land Park or even across the rivers from North Sacramento or West Sacramento. As automobiles grew popular, K Street faced trouble from busy traffic and limited parking.”

Now, thousands of people come into Sacramento daily to work for county, city, state and federal government agencies. And then they go home at the end of the day, leaving downtown.

The City of Sacramento is the largest slumlord in the downtown area. Thanks to years of redevelopment botches, the Sacramento Housing and Redevelopment Agency scooped up building after building along K Street, consigning the structures and streets to eventual blight. The city has chased away more business than it has saved, through greed and ineptitude. 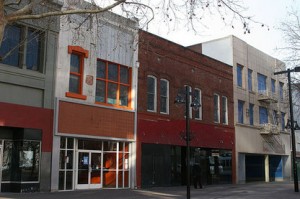 “The Sacramento City Council earlier this week approved a key piece of funding for a residential complex on the block,” the Sacramento Bee reported. “A new, five-story building with 122 apartments would rise behind the row of historic storefronts, which would hold a live music venue, boutiques and rooftop terraces with views of the Capitol and downtown skyline. Another 15 housing units built over the existing storefronts would face K Street. It would be the first significant infusion of housing on K Street.”

But in true idiotic Sacramento fashion, 60 percent of the apartments will be low-income housing. “People living downtown is what brings the area vibrancy,” City Councilman Steve Hansen said in the Bee story. “When you live in a place, you’re less likely to tolerate the trash not being picked up or other issues. It’s a place that people want to take ownership of.”

Au contraire Mr. Councilman. The best way to kill retail is to surround it with low income residential housing. While Sacramento has claimed for years it wants to create a local market with more residential units in downtown, the low-income component kills this concept. People spend money where they live. But if all of the residents are low income and have no money, what’s the real goal?

People living downtown on government assistance or in public flop houses are not spending money at the restaurants, or shopping. And the “mixed-use” apartment projects the city has been pushing for several years located over bars and restaurants have been a total failure.

And that is because the city should not be in the development business.

“The city has been working for decades to redevelop this bleak stretch of downtown’s historic shopping thoroughfare,” the Bee said. “But the plans today are farther along, and more specific, than they have been before.”

Promises, promises. The question really is, which developer will reap the benefits from rebuilding along K Street, in business and in bed with the city?

The answer is: “D&S Development and CFY Development were granted control of the properties nearly three years ago by the city, which had spent tens of millions of dollars acquiring them,” the Bee reported. “After wrangling with multiple financing plans and the persistent economic downturn, the development team devised a workable project.”

The City Council’s social and political policies to artificially mandate subsidized housing and discourage market rate housing has actually made housing in the central city much more expensive than it should be, and completely unrealistic for buyers. Sacramento’s neighbors, Placer County, El Dorado County and West Sacramento are doing so well compared to floundering Sacramento because these jurisdictions don’t have to finance 80 percent of a development project just to get something started.

Sacramento’s downtown has matured substantially in the past two decades with restaurants and entertainment on nearly every block. However, the blighted K Street has floundered under every mayor, as has any riverfront development.

With 450,000 residents in the city of Sacramento, and 1.7 million residents in Sacramento County, Sacramento is a good-sized city, but not a metropolis. The obsession by city officials to turn Sacramento into a world-class city is now costing taxpayers greatly. But who really wants Sacramento to become a sizable, “big” city — politicians or residents?

Rarely do I hear a Sacramento resident state a desire for Sacramento to become bigger and more populated. It’s always a politician expressing interest in making Sacramento bigger. And almost always, it’s from a politician with grand aspirations for higher office, using Sacramento as a starting-off point.

Sacramento has had its share of big industry but mostly thrives on small businesses, entrepreneurs and government employees. With more than 100 neighborhood associations in Sacramento, each of our neighborhoods has more of a town feeling. And in truth, our City Council representation reflects more of a town council.

The best definition I have found of a “world-class city” comes from Seattle journalist Bill Virgin,who tracks business and economic trends. “World-class business cities are those where strategic and tactical decisions are made on everything from new plant investment to developing new markets and products,” Virgin explained. “They’re the cities others watch and react to. World-class business cities are not guaranteed exclusivity in producing the next wave of influential products, technologies and companies – but they’re a more likely incubator for them. And those products, technologies and companies are where new jobs come from.”

Sacramento is not strategically, tactically or decisively developing new markets or products, or putting in new plants for any industry.

In fact, Sacramento is doing the opposite. World-class cities are not driven by how many restaurants you have downtown or how big your sports arena is. The big cities with the Fortune 500 businesses and companies are business friendly and defined as “world class.”

But, Sacramento’s downtown already has an unusually large low-income apartment component, as well as adult group homes. There are panhandlers, drunks and druggies, nuts and mentally-ill, louts, hustlers, career loiterers, and teenage moms all over downtown, just hanging out on the streets. Most live downtown in government subsidized apartments and others use their government subsidized light rail pass to get downtown.

Last week I was followed to my car by one of these crazies. The week before I was followed to the Capitol by another nut. This happens to me frequently. My office is located next door to a scuzzy bar and subsidized housing apartment.

Perhaps Councilman Hansen can explain how more 60 percent subsidized housing will be good for Sacramento, or how this fits anyone’s view of “world-class.”

(photos from Sacramento Press and Hi-Lo blog, because the link to the Sacramento Public Library for historic photos no longer works)