SACRAMENTO — As I left the Capitol today, I noticed several official vehicles double parked around the Capitol. Then I heard that Sen. Ron Calderon’s Capitol office had been raided by the FBI. Calderon, is a Democrat from Montebello, CA. 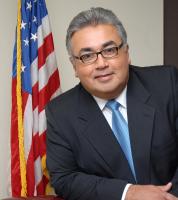 Additionally, I was contacted by legislative staff and told that the FBI raided the Latino Caucus offices in the Legislative Office building across the street from the Capitol.

“Three cars from the Dept. of Justice and one from the FBI, parked on N Street in front of the legislative office building about 3:30 pm,” I was told by a legislative staffer. “It looked as if there were seven people who entered the building with collapsed boxes.”

Scott Lay, publisher of Around the Capitol, reported more:

The U.S. Attorney in Sacramento (Eastern District of California) has confirmed that it has executed search warrants in the Capitol. While there are rumors that two other offices have been searched, they are just rumors.

From what I have gotten from multiple sources, the two offices searched are those of Senator Ron Calderon (D-Montebello) and the Latino Caucus office in room 511 of the Legislative Office Building across the street from the Capitol at 1020 N Street.

The actions are reportedly in response to a Los Angeles case, and the search warrants are sealed.

Some sources in the Capitol say the search of the Latino Caucus offices and Calderon’s office is part of a public corruption investigation in Los Angeles.

The story is one all news and internet news sites, with nothing more than speculation at this point.

More to come as the situation unfolds…

Calderon has hired Los Angeles attorney Mark Geragos, who contends the Justice Department is targeting his client. “This is a leak from the U.S. Department of Justice,” Geragos told KTLA news. “They should be ashamed of themselves. If I could shed more light on this, I would.”

“Calderon previously came under scrutiny for his handling of his legal defense fund, which was set up to cover costs stemming from a vote re-count in 2006,” KTLA reported.

Calderon received a warning letter, but he was not penalized.

Calderon was not at the Capitol at the time of the Tuesday raid. The Latino Caucus was holding a function for labor leader Dolores Huerta at nearby offices.

Calderon is part of a political family which has held office in the Legislature for more than 30 years. “Senator Calderon is the second of his family to serve in the State Senate and the third to hold a seat in the legislature,” his Senate bio says. “His oldest brother, Charles Calderon, was elected to the State Senate in 1990 and was termed out in 1998. Middle brother Thomas Calderon served in the State Assembly from 1998 to 2002.”

Charles Calderon was elected to the Assembly again, and held office 2006-2012, when he was termed out a second time.

The FBI raid went on for five hours at Calderon’s office, and many boxes were removed.