The governor’s 2014-15  budget proposes to spend $850 million from cap-and-trade auction revenue on various projects — including the state’s high-speed rail project. However, this would defy the very purpose of cap-and-trade. 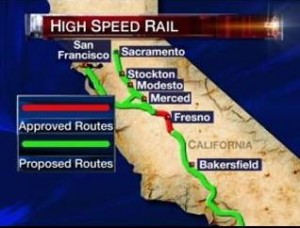 Under AB 32, California’s Global Warming Solutions Act of 2006, cap and trade takes money from business owners and manufacturers who produce products, but are deemed “polluters” by the state.

It’s like being taxed for being a business that emits any greenhouse gas emissions.

That money is taken out of the economy, and given to the government to decide how it will be spent.

California business owners only know it is money they will never see again, but must pay to the state in order to keep doing business in California.

Cap and trade 1A

The goal is to reduce greenhouse gas emissions in the state to 1990 levels by 2020.

Cap-and-trade was established by the California Air Resources Board to help achieve this goal.

The regulation places a “cap” on aggregate greenhouse gas emissions from businesses and entities responsible for approximately 85 percent of the state’s emissions.

In the implementation the cap-and-trade program, the California Air Resources Board allocates a certain number of carbon allowances to the businesses. According to the CARB, each allowance equals one ton of carbon dioxide equivalent. The CARB provides some allowances for free to designated businesses. Other businesses are required to purchase allowances at auctions. Once the allowances have been allocated, entities can then “trade,” buy and sell the allowances, in order to obtain enough to cover their total emissions for a given period of time.

Lawmakers shared concerns with the governor’s budget proposal, and the use of cap and trade funds for high-speed rail, as well as concerns about the lack of formal and ongoing cost analysis by the Air Resources Board, of the projects the money will go to.

In order to understand the base concerns, the LAO report on the governor’s budget proposal explains:

In order to minimize the economic impact of cap-and-trade, it is important that auction revenues be invested in a way that maximizes GHG emission reductions. Maximizing emission reductions (specifically in the capped sectors) reduces competition for allowances, thereby putting downward pressure on the price of allowances. This, in turn, reduces the overall cost for covered entities to comply with AB 32 and the potential negative economic impacts of the program on consumers, businesses, and ratepayers. It is, however, unclear to what extent the complement of activities proposed by the Governor maximizes GHG emission reductions.

“A greenhouse gas emission analysis completed by the High Speed Rail Authority indicates that once the high-speed rail system is operational in 2022, it would contribute a relatively minor amount of GHG emission reductions to the state. Moreover, the construction of the project would actually produce additional emissions (though HSRA will try to offset these emissions). Despite these findings, roughly 30 percent of the funding in the Governor’s proposal goes to the high-speed rail project. Compared to a different mix of investments that could be made with the cap-and-trade revenue, the Governor’s proposal is unlikely to maximize GHG emission reductions. Therefore, the Legislature will need to consider the most effective use of the cap-and-trade auction revenue.”

The LAO warns the Legislature there are legal risks with Brown’s plan to use cap-and-trade auction funds for funding high-speed rail:

Based on an opinion that we received from Legislative Counsel, the revenues generated from ARB’s cap–and–trade auctions are considered “mitigation fee” revenues. Thus, the use of these revenues are subject to certain legal criteria. Specifically, we are advised that their use is subject to the so–called Sinclair nexus test. This test requires that a clear nexus must exist between an activity for which a mitigation fee is used and the adverse effects related to the activity on which that fee is levied. Given this legal requirement, the administration’s proposal to fund activities (such as high–speed rail) could be legally risky. While the high–speed rail project could eventually help reduce GHG emissions somewhat in the very long run, it would not help achieve AB 32’s primary goal of reducing GHG emissions by 2020.

But at the hearing, Cara Horowitz, an attorney with the UCLA Emmet Center on Climate Change and the Environment, disagreed with the legal ramifications. Horowitz said legal liabilities are not too great with cap and trade funds going to high-speed rail.

Dan Sperling, a professor at the UC Davis Institute of Transportation Studies, recommended the Legislature allow the experts to use their professional judgment to proceed with the program. Sperling said analyses can be done along the way.

Several lawmakers were not comfortable with this. Sen. Richard Roth, D-Riverside said given that the state is spending four-fifths of a billion dollars, there should be more rigorous, formal quantitative costs analysis.

Dorothy Rothrock with the California Manufacturers and Technology Association represents manufacturers covered by cap and trade. Rothrock had only one minute at the hearing to speak. She briefly spoke about manufacturers who must acquire and hold allowances to account for their greenhouse gas emissions.

“They receive allowances without charge only up to a level that represents an extremely efficient operation – allowances for any emissions above that level must be purchased.,” Rothrock explained.

“The allowances that ARB can sell at auction are there only because they have been withheld from regulated entities rather than distributed, and in combination with the free allowances do not exceed the total volume under the declining cap.

So much of the money you are talking about today is coming from a sale of allowances to manufacturers who are already struggling to maintain operations and employment in the state.”

“Unless ARB changes direction, the current plan is that the cost burden will significantly increase in future compliance periods when more and more allowances will be withheld from some industries.  Even the most efficient companies will have to buy allowances for more of their emissions to keep operating in the state.

So you can see why we care about the expenditure of funds that have and will be extracted from our members.”

The CMTA keeps a list of “Casualties;” businesses which have closed, moved out-of-state, cut jobs, or grew operations elsewhere, which is the CMTA’s growing concern.

The CMTA offered a few recommendations about how the Legislature should proceed:

First, we believe AB 32 does not authorize the withholding and sale of allowances. Cap and trade will get us to the goal without the sale of allowances. And if it is authorized by AB 32, the state’s use of the money could be severely constrained to stay within limits defined by the bounds of that authorization.  This will all be determined in the courts, and we don’t know the outcome yet. If the money is spent illegally, an a court decides it is not authorized, a refund could be required putting the general fund at risk. Also, since we are on track to meet AB 32 goals there is no urgency to spend this money.

The most prudent course would be to hold the funds pending resolution of the legal questions.

If you do go forward with spending, then choose purposes that are most likely to survive a court challenge, minimizing a risk of refund from the general fund and maximize GHG reductions. The tighter the link between the source of the money, the purpose of cap and trade and how you spend it, the better.  If the purpose of the auction was to set transparent price signal for carbon you can restore the funds back to the payers in cap and trade as was done in the SO2 program for acid rain.  A purpose to minimize the costs of compliance in cap and trade could lead you to recycle all funds paid by manufacturers back to them for GHG emission reduction programs, such as combined heat and power projects, energy efficiency, or waste management to reduce their future compliance costs.

In any event, you should try to find the projects that will give us the biggest bang for the buck and reduce future compliance burdens under AB 32.  Any emissions we don’t reduce with the current funds will still be around and will need to be reduced by some other means, making us pay again and again for the same reductions.

In 2008, the LAO was asked to provide a critique of the AB 32 Scoping Plan Economic Analysis. It is still relevant today, and was referenced several times throughout the hearing:

“We conclude that (1) the scoping plan’s overall emissions reductions and purported net economic benefit are highly reliant on one measure—the Pavley regulations, (2) the plan’s evaluation of the costs and savings of some recommended measures is inconsistent and incomplete, (3) Macroeconomic modeling results show a slight net economic benefit to the plan, but ARB failed to demonstrate the analytical rigor of its findings, (4) economic analysis played a limited role in development of scoping plan, and (5) despite its prediction of eventual net economic benefit, the scoping plan fails to lay out an investment pathway to reach its goals for GHG emissions levels in 2020.”

The hearing is available on the California Channel.