When one must ask “what is the definition of ‘false and misleading’? in a political campaign,” it is is evident  Assembly District 73’s Anna Bryson is twisting and contorting a legal ruling against her into something that it just is not. 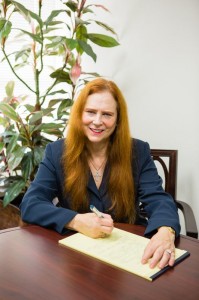 As many voters have grown cynical about the veracity of political candidates and politicians, sometimes “false and misleading” statements go too far. Legal mincing and parsing of words brings back former President Bill Clinton’s notorious 1998 statement to a grand jury about the Monica Lewinski affair, “It depends on what the meaning ‘is’ is.”

The heart of the matter

At the heart of a recent issue of this nature is an official campaign statement by 73rd Assembly candidate Anna Bryson, “On the school board, I returned $59 million to taxpayers.”

Bryson was accused by a voter of making a false and misleading campaign statement. A legal challenge was filed in California State Superior Court.

On Friday, Sacramento Superior Court Judge Shelleyanne Chang ruled Bryson’s statement was “false and misleading,” and ordered the official statement to be re-written.

The judge even crossed out the offensive words on the court order, and hand wrote in the replacement language (see photo below).

What was clear by the judge was again modified. Saturday, Bryson’s campaign sent out a press release with the headline:

Following up again on Monday, attorney Phillip Greer with Bryson’s campaign, sent out yet another email, but this time blaming the judge’s decision on a bad verb tense:

“What was changed was the tense of the verb “return.” The fact that Anna voted to return $59 million to the District’s taxpayers was not challenged nor was it changed.”

The tense of the verb “return,” is irrelevant and a diversion. The legal challenge was not about verb tenses. In fact, Judge Shelleyanne Chang ordered a new verb into Bryson’s original campaign statement, “I returned $59 million to taxpayers,” changed to, “On the school board, I voted to save taxpayers approximately $59 million.” This is hardly a verb tense change. 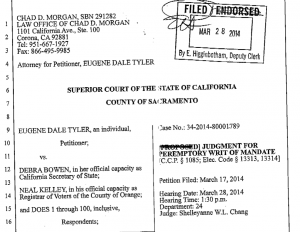 “The court, having considered the evidence and oral argument, and good cause having been shown that Real Party Bryson’s statement, ‘On the school board, I returned $59 million to taxpayers,’ is false, misleading, and inconsistent with the Elections Code. ”

I contacted Anna Bryson’s campaign spokesman, Justin Matheson. “As per my comments in the [press] release—this of course is politically motivated and we want to make it clear that the Judge never disputed the $59 million dollars,” Matheson said in an email. “This is what our opponents were trying to get thrown off the statement and failed to do so.  Since the $59 million is anticipated in the future they wanted us to use the term ‘voted to save $59 million’ and not focus on the return.”

Following Friday’s court order, Bryson’s campaign sent out this statement: “The Judge affirmed Anna Bryson voted to save taxpayers $59 million, and it will stay in her ballot statement.”

“Yesterday, the Anna Bryson for Assembly campaign went to court in Sacramento to fight a frivolous lawsuit filed by Eugene Dale Tyler and Bill Brough’s campaign team.  Their attempt was to strike down a section of Bryson’s ballot statement, claiming that Anna Bryson didn’t return $59 million dollars to taxpayers.   The Judge affirmed Anna Bryson voted to save taxpayers $59 million and it will remain in her ballot statement.”

Bryson is one of seven members of the Capistrano Unified School District Board, which voted to return the savings from a recent refinancing of school bonds, to taxpayers.

Whether the Capistrano School District will actually be returning $59 million to taxpayers, or the $59 million will be “returned” to tax payers in the form of future tax reductions, is also important.

According to attorney Phillip Greer with the Anna Bryson for Assembly campaign, “Given that a portion of the monies to be returned have not yet made it onto the tax bills of the residents in the District, the Court felt that the use of the word ‘returned’ with regard to the entire $59 million was anticipatory.”

How are voters supposed to sort out the truth in political campaigns if words don’t matter? And in this case, how do they decide if Bryson’s claim is legitimate? 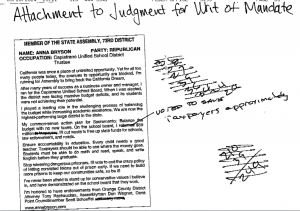 According to Dana Point attorney Craig P. Alexander, not only do words matter, so does character. Alexander told me he used to be a Bryson supporter. But he is supporting Bill Brough, another Republican candidate, in the AD 73 race.

“Voters need to ask themselves, when people do these kinds of things [like Anna Bryson has], how will they react in the pressure cooker in Sacramento?” Alexander asked. “I care who is going to represent me.”

Alexander explained California Elections Code, and what went in to Judge Chang’s decision.

In elections law, evidence that is “clear and convincing” means that the evidence presented by a party during the trial must be highly and substantially more probable to be true than not, Alexander explained.  “The judge must have a firm belief or conviction in the evidence’s truth.  Once a party has established in the mind of the court by clear and convincing evidence the burden shifts to the other side to disprove the truth of the allegations against him/her.”

In election law cases the judge, not a jury, makes the determination.  “That is what Judge Chang did in this case,” Alexander said. “It also means that Anna Bryson failed in her attempts to convince the judge what she was saying in her original statement was truth.”

I asked Bryson about her official campaign statement and the Superior Court case. “A word was put into a different tense, meaning it [the $59 million] hasn’t been returned yet,” Bryson said when we talked.

“This [decision] would change every board in the state,” Bryson added.

“This is where I can actually return Mello-Roos money to the voting constituency,” said of her vote.

She said when she was elected in 2007 to the Capistrano Unified School Board, because of the recession, they were faced with cutting $150 million from the $500 million budget. “If you cut enough and structure properly, it can work for the taxpayers,” Bryson said.

Back to the verb tense and legal challenge

To obtain the writ of mandamus, Latin for “we order,” the “clear and convincing evidence” means the statement is false, misleading or inconsistent with the requirements of election law.

The judge found all three to be true — or false, in this case.

That is why the press release from Bryson’s campaign is dubious.

What is Bryson’s campaign claiming?

After receiving a great deal of pressure from local voters, the Capistrano Unified School District Board voted to return $59 million of Mello-Roos tac money to district voters. This will be done in the form of future savings, and not in actual refund checks.

Following the passage of Proposition 13 in 1978, Mello-Roos was passed in 1982, named after Democrats Sen. Henry J. Mello and Assemblyman Mike Roos.

The Mello-Roos tax is billed to everyone in community facilities districts. Supporters say the taxes pay for services including utilities, roads, public safety, schools and recreation.

But property tax fighter Howard Jarvis described Mello-Roos fees as a fancy legislative trick to get around the taxpayer protections of Proposition 13, which limited governments’ ability to raise property taxes. “Rather than force developers to pay upfront for roads and sewers in a new development and simply adding that cost to the house itself, they could instead pass these building costs onto a bond district created under Mello-Roos, let government collect the money to repay them, and artificially reduce the costs of the house to be sold,” Jim Lacy, author of Taxifornia, wrote in 2011.

Do words and character matter in public office? The short answer is yes. Is Anna Bryan is twisting and contorting what is a definite ruling against her into something that it is not. And words matter, not just to writers, but to voters. Because if what a candidate says and does are different, trust is gone.

Is there really anything else to discuss?