Gerawan Farming worker Silvia Lopez recently sent a letter to members of the California Legislative Latino Caucus, asking for help in her two-year fight with the Agricultural Labor Relations Board and the United Farm Workers Union.

The ALRB has refused to count the thousands of ballots Lopez collected and her co-workers cast six months ago to decertify the UFW labor union to end its representation. 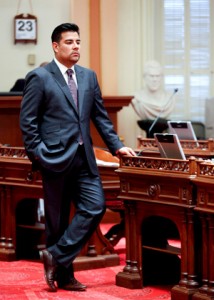 But so far, the only sound coming from Latino legislators is the distinctive, quiet sound of nothing. Nada. Crickets.

Lopez, who is leading the effort for the workers, sent Sen. Ricardo Lara, D-Los Angeles, Latino Caucus chairman, and each member of the Latino Caucus, a letter in English and Spanish. But Lopez got no response.

“Mr. Chavez once said, that it is ‘never about grapes or lettuce, it is always about people,’” Lopez wrote. “I believe that is true, and that is why I write to you.”

“I am writing on behalf of thousands of real people and their real families who need the help of the Latino Caucus. We are farmworkers employed by Gerawan Farming in the Central Valley,” Lopez said in her letter. “We are field laborers and packers. We work with apricots, nectarines, peaches, and grapes. We are the exact kinds of people Mr. Chavez worked for his whole life. I believe that if Mr. Chavez was here today and visited our worksites, he would be happy at the progress that has been made and the good working conditions we have.”

“Eso no es justo!” Lopez said. That is not fair! “Se supone que UFW debe estar allí para los trabajadores del campo, no estar en contra de ellos! UFW is supposed to be there for the farmworkers, not against them!”

Isn’t it ironic that the ALRB, created in the 1970’s to provide farm workers a voice, refuses to let workers have a voice to vote, because the outcome may not fit their agenda.

“We must understand that the highest form of freedom carries with it the greatest measure of discipline.” — Cesar Chavez

The battle goes to court

Lopez recently sued the members of the Agricultural Labor Relations Board for denying her and other farm workers’ the right to a free and fair election. They demanded the votes be counted.

Appearing to be working in tandem with the ALRB, the UFW has engaged in many coercive activities, including repeatedly showing up at workers’ houses, disrupting workers during their lunch breaks, claiming credit for the workers’ high pay and good benefits, and is now promoting boycotts of products produced by the Gerawan farm workers.

However, most can’t get past the idea that a labor union can disappear for twenty years, and then come back and demand collective bargaining and a contract.

“Preservation of one’s own culture does not require contempt or disrespect for other cultures.” – Cesar Chavez

Lopez is a quiet, thoughtful 15-year Gerawan Farming employee, and the de facto leader of thousands of Central Valley farm workers who have been protesting for two years to oust the UFW union from the farming company.

“We are doing exactly what Cesar Chavez taught us to do. I think if he were alive today he would be ashamed of the way his union is treating us,” Lopez said recently. “The UFW abandoned us for 20 years and now they are back and threatening to take money from our salaries. If we refuse, they will fire us. How is that fair?”

“That’s why I gathered 3,000 signatures to hold an election to decertify them from representing us, because they already don’t,” Lopez added. “But ALRB Regional Director Silas Shawver has blocked us at every turn.”

Lopez has only been asking for the opportunity to vote on whether the Gerawan employees would allow the UFW to represent them, or not. The ALRB has denied this request several times, despite the 3,000 signatures Lopez collected for a petition to decertify the union, and allow them to continue working as non-union employees.

UFW officials have never explained why they left Gerawan Farming more than 20 years ago. Today, the UFW is a shadow of what it once was. With approximately only 3,300 union members, the UFW needs money and members to survive.

However, it doesn’t take a superhero with X-ray vision to see Gerawan’s 5,000 employees total more than the current UFW membership. Unionizing the Gerawan employees, and receiving three percent of each workers’ wages could be a financial jackpot for the union.

“From the depth of need and despair, people can work together, can organize themselves to solve their own problems and fill their own needs with dignity and strength.” – Cesar Chavez

Farm workers from Gerawan Farms attended a hearing yesterday at the Fresno County Superior Courthouse at which the Agricultural Labor Relations Board attempted to force a new contract on employees. Nary a word from Gov. Jerry Brown or the Latino Caucus, even though employees were barred from attending mandatory mediation and are attempting to remove the UFW from representing them.

“I want to look that judge in the eyes and make sure he knows that many of the farm workers do not want this contract,” Lopez said ahead of the hearing. “We are fighting in court to stop it. The UFW was not here for 20 years and then showed up to ‘negotiate’ a new contract that says we have to give them 3 percent of our paycheck or they will fire us. We have tried to attend mandatory mediation and were shut out by the ALRB and UFW. Now the ALRB, which is suppose to work for us, is trying to impose a contract we don’t want,” said Silvia Lopez, a farm worker who has sued members of the ALRB for denying her civil rights.

A Superior Court judge today took under submission the ALRB General Counsel’s motion to impose a new union contract on Gerawan farm workers.
“My coworkers and I appreciate the judge listening to our concerns about the ALRB forcing the UFW contract on us. We don’t want this contract.

How could this happen?

Absent for 20 years, the UFW never negotiated a contract or did anything on behalf of the Gerawan employees. In 2012, the union showed up out of nowhere to “negotiate” a new contract, claiming it was “on behalf of the employees.” But this contract would give the union 3 percent of each worker’s paycheck. Workers who refuse will be fired.

When Ms. Lopez and her co-workers began the process to decertify the UFW, which would be the largest decertification in California history, Gov. Jerry Brown’s appointees to the ALRB engaged in schemes to prevent the votes from being counted.

Despite these efforts, Ms. Lopez and her coworkers voted on November 3, 2013 to decide whether to decertify the UFW. In what many say is a clear violation of Ms. Lopez’s and her co-workers’ rights, those votes remain sealed and uncounted by the ALRB.

The ALRB’s Visalia regional director, Silas M. Shawver, the official who has rejected the workers’ signatures several times, has fought them every step of the way.

Silvia Lopez recently sued members of the ALRB for denying her and other farm workers’ rights to a free and fair election and demand the votes be counted.

The UFW has engaged in many coercive activities, including repeatedly showing up at workers’ houses, disrupting workers during their lunch breaks, claims the reason for the workers’ high pay is because of the union, and is now promoting boycotts of products produced by the Gerawan farm workers.

“It’s ironic that those who till the soil, cultivate and harvest the fruits, vegetables, and other foods that fill your tables with abundance have nothing left for themselves.” — Cesar Chavez

“I am suing Governor Brown’s appointees to the ALRB for denying us our right to a free and fair election,” said Lopez. “He created the ALRB, which is supposed to help defend our rights. Now, those appointees are denying our rights. I am calling on members of the Latino Caucus, who recently attended a viewing of the new Cesar Chavez movie, to follow Sr. Chavez’s words and deeds and protect our rights. I hope that they will reach out to the ALRB and Governor Brown and demand our votes be counted and our voices be heard,” Lopez said.

The ballots from that election remain uncounted by the ALRB.