Immediately following the U.S. Supreme Court decision to uphold religious rights in Burwell v. Hobby Lobby  the left and Democrats predictably responded that the 5-4 decision means a ban on contraception for women. 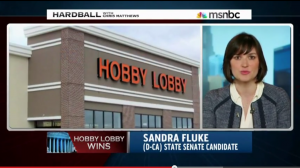 Fluke, whose only claim to fame was her shrill demand that taxpayers pay for her birth control pills, during the 2012 Presidential campaign, is either lying about the SCOTUS decision, or she’s not smart enough to understand it.

The Supreme Court decision in favor of Hobby Lobby is a landmark victory for religious liberty.  The 5-4 ruling determined the U.S. Department of Health and Human Services mandate requiring businesses like Hobby Lobby to provide life-terminating “contraception” drugs and devices in the company’s health insurance plan, against their religious convictions, is unconstitutional.

Even though Hobby Lobby has always paid for its employees’ contraceptive coverage, it refuses to pay for abortions, or for procedures and drugs considered abortificacients, substance or devices used to induce abortion.

The court found that individuals do not lose their religious freedom, even under a family business, and that the HHS mandate substantially burdened the religious beliefs of Hobby Lobby’s owners, in violation of the Religious Freedom Restoration Act.

The question Sandra Fluke needs to honestly answer is, “How can a company that has paid for contraception for the last two decades be guilty of wanting to limit women’s access to reproductive rights?”

So Fluke is either lying, or ignorant of the facts in the Hobby Lobby case. 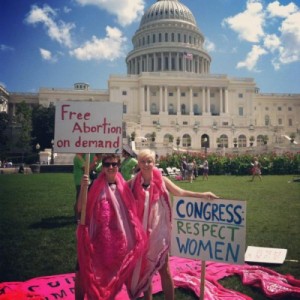 Fluke and other hysterical, shrill women, are setting the women’s movement back a couple of hundred years.  These liberal feminists screech about a “war on women” any time someone challenges their asinine canned speeches and talking points — or when faced with having to pay for their own birth control.

Prior to the Obamacare HHS mandate, women paid for their own contraception, and even magically figured out how to get it when they weren’t covered under a health plan.

The original women’s movement, 1848-1920, wanted economic freedoms, and the right to vote. They wanted to own land. Eventually, women wanted equal rights in the workplace. And by the 1960’s they wanted to “right” to abort unwanted babies.

Their imaginary “war on women” might be amusing today, given that women achieved important rights in the 19th and 20th centuries. But feminists’ demands for cradle-to-grave government care, which includes taxpayer-funded contraception, and guilt-free abortions, isn’t amusing. Nor are the subsidized on-demand abortion-related services they demand, now referred to as “reproductive rights.”

These are the same feminists who dress in vagina costumes and march on the nation’s Capitol, demanding the government keep its hands off their “lady parts…” as long as it keeps paying for everything else. 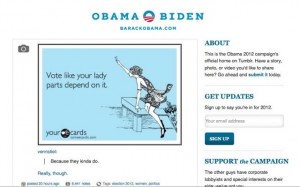 During the 2012 presidential campaign, Team Obama posted a campaign graphic online, which read, “Vote like your lady parts depend on it…Because they kinda do.”

The post was removed from the Obama campaign website, but not before Weekly Standard captured it (at right).

Members of Code Pink protested the 2012 Republican National Convention in Florida, wearing giant vagina costumes (where does one get such a costume?), and encouraged women to “Bring your vagina to the RNC!” (pictured above)

“Together, we will bring our resilient, creative, powerful vaginas to Republican fundraisers and to the convention hall,” Code Pink said on its website. “We’ll also take part in the Coalition March on the RNC and other peace and justice actions.”

Code Pink did several protest marches during the RNC convention. However, it’s probably not a stretch to assume that few Republicans were swayed by the hysterical, vulgar Code Pinkers, dressed like female genitalia, carrying signs saying “Respect Women, and shrieking, “Read my lips.”

Birth control may not be Sandra Fluke’s boss’s business… until she asks him to pay for it.

Matt Canter with the Democratic Senatorial Campaign Committee, also sent out a Tweet:

“What this is really about at its base is trying to figure out as many ways as possible to limit women’s access to reproductive healthcare,” Fluke declared on MCNBC’s Chris Matthews’ show.

Clearly she took a page from Rep. Debbie Wasserman Schultz, the current brain trust and chairwoman of the Democratic National Committee: “This is a stifling decision for American women. It’s a decision that blocks women from being able to make their own health care decisions,” she said. “This is deeply troubling, because you have organized religions that oppose health care, period.”

National Review compiled a list of all of the drugs and procedures that Hobby Lobby employees have, free of charge, including oral birth control:

The four types of birth control at the center of Hobby Lobby’s challenge were:

Plan B,  known as the “morning after pill”

Things are looking up for the hundreds of other plaintiffs suing against the Obamacare mandate.

With the the Supreme Court ruling in favor of Hobby Lobby, perhaps the government should remind Sandra Fluke that Title X is a federal program that offers free contraception to women.