Statists turn to drought for control in California

Sinclair Lewis wrote “It Can’t Happen Here” in 1935, a fictional story about a populist state Senator who is elected President on 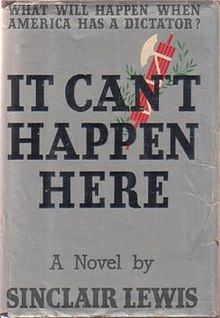 campaign promises of economic and social reforms, and a return to patriotism and traditional values. After winning the presidency by appealing to the interests of ordinary Americans, the new President instead takes over the government, imposes totalitarian rule with the help of a ruthless paramilitary force. The new President’s government abolishes women’s and minority rights, and eliminates states’ rights by subdividing the country into federal administrative sectors. The new government imposes statist control of all aspects of the life and productive capacity of the nation through censorship and terrorism.

All the while, citizens reassure themselves that fascism cannot “happen here.”

If this feels vaguely familiar, it should – especially the part about citizens insisting it can’t happen here.  President Barack Obama’s promise to remake and downsize America is in plain sight, but ignored by too many. “It Can’t Happen Here” is happening right in front of our faces.

As Jon Coupal explains in ACA 6: New Attack on People’s Power, politicians strongly desire to exercise a legislative monopoly over the initiative process, through ACA 6. “The powers of direct democracy are enshrined in the California Constitution for reasons that are just as compelling in 2014 as they were in 1911 when Governor Hiram Johnson, seeking to suppress the absolute control the railroads had over the state Capitol, pushed to give ordinary citizens a “legislative battering ram” – using the language of the Supreme Court – to address issues that, for whatever reason, the legislature refuses to address. It’s ironic given that three California State Senators have been forced out of office because of perjury convictions or indictments for corruption,” Coupal said.

The Orange County Board of Supervisors has been in secret negotiations with the Sheriffs’ union for two years, as Marc Bucher explains.

Kevin Dayton warns Republicans in the Assembly and Senate who see construction union support as useful to their political futures, could open the floodgates for costly union control of California water projects.

I was recently told by a city insider the Sacramento Metro Chamber has been involved in secret meetings with the City of Sacramento officials to plan future major utility rate hikes for all four utility services: water, sewer, storm drainage and garbage.  Increases in storm drainage rates require a public vote, but the city council can raise the other three unilaterally.

Self-appointed Sacramento Brown-Shirts rummage through neighbors’ recycling bins, recording what is being recycled, and what is in the trash.

Now, the city of Sacramento is asking neighbors to tattle on neighbors for “wasting water,” but the definition of “wasting” is fuzzy. And now come the brown lawns: “It’s not about whose lawn is greener anymore, it’s about whose lawn is browner,” CBS Sacramento reported. “Frankly when your lawn looks as bad as mine does you sort of want to encourage others to stop watering concrete,” one Sacramento city resident said. 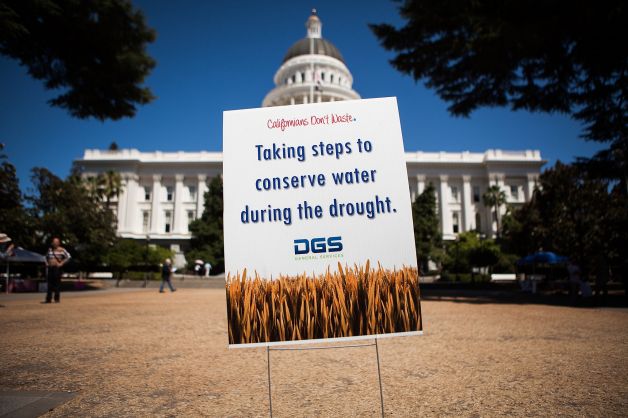 Terrance Davis with the city department of utilities said that competition is motivation, and it’s working to reduce water waste. Oh now government workers claim to love the competitive spirit.

The State Water Resources Board is voting today to impose fines of $500 a day on homeowners and businesses found watering lawns, operating fountains, car washing, and the like.

“The State Water Resources Control Board will consider emergency regulations today that would place prohbitions on wasteful activities such as excessively watering a lawn in a manner that causes runoff, cleaning a car with a hose that has no shutoff valve, and washing down hard surfaces like driveways and sidewalks,” the Sacramento Bee wrote.

Yet the city and the local news have neglected to lead by example, nor have officials offered relevant water saving information, tips and ideas for homeowners to save the landscaping they’ve clearly invested in. Rather than educating the public on how to save water, punishments are preferred by the Fascists: a green lawn must be a sign of criminal water use.

California does not collect and store water runoff. Most of the state’s water ends up running into the ocean.

In Sacramento, the City of Sacramento is the biggest water waster. Broken sprinklers run all night in the city’s parks. Broken water fountains in the parks leak, creating small swamps around them. The sprinklers continue to run during the rainy season.

City leaders need to clean up their own operations before setting their sights on the city’s responsible homeowners and businesses, operating as President Obama’s climate change soldiers.

My lawn is still green, and my landscaping still healthy. But it’s because my husband and I have spent the last few years diligently replacing old inefficient sprinklers with new, efficient rotating sprinklers. We have no water runoff, and only water a few minutes at a time – on designated watering days.

Our shrubs and gardens are watered minimally using tiny emitters. I also hand water using reclaimed household water from showers and kitchen. My husband can even wash a car using one gallon of water in a bucket. Water conservation can easily be done, but that’s not the point, is it?

By year 2040, 50 million Californians will be living on less water and electricity than the current 38 million Golden Staters do now. That’s the scheme hatched by state officials and some legislators.

The California Independent System Operator, is a quasi-governmental agency which regulates the reliability of the state’s energy grid. In a recent study, CalISO  warned that, as California tries to meet the stringent requirements of the Renewable Portfolio Standard of 33 percent renewable energy production, “so does the need for flexible capacity resources.”

The 33 percent figure is the highest in the country after the Legislature pushed through and passed the environmentally restrictive Renewable Portfolio Standard in 2011. It mandates that California obtain 33 percent of all electricity from renewable resources by 2020. This figure includes all of the energy purchased outside of California. Energy experts say that California purchases more than 30 percent of its energy from out of state.

With industrial electricity rates already 88 percent higher in California than in Texas, and closure of the San Onofre nuclear plant, a shortage of electricity is expected, power producers agree.

Every Fascist government in world history controlled and manipulated the economy in some way, from the corporatist collusion of Italy’s Mussolini, to outright government ownership and control of Hitler, Cuba’s history of religious and homosexual intolerance, to China’s population control.

Jerry Brown as governor in 1978, signed the Dills Act, turning over the state to labor unions and collective bargaining.  Flash forward to 2010, when Proposition 25 was passed, allowing only a simple majority required for the democrat state legislature to pass budgets — there is nothing now to stop further growth in government.

When the unions get everything they ask for at the taxpayer trough, government growth squeezes out the private sector even more, will citizens then notice, or still insist “It can’t happen here.”

It is happening here.