Plastic Bag Alliance Not Clowning Around on Job Loss, Cost and ‘Hypocrisy’ of SB 270

SACRAMENTO — Saddling consumers into paying extra for plastic bags at the grocery store is becoming an wildly unpopular idea. Facing formidable opposition because of the thousands of jobs which will be lost, Senate Bill 270 by Sen. Alex Padilla, D-Pacioma, is not just about the extra cost to shoppers anymore. 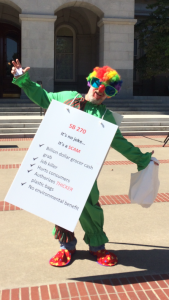 Plastic bag representatives, recyclers, workers, and clowns, held a press conference at the Capitol Tuesday to bring attention to SB 270, which would ban the currently used plastic grocery bags, and replace them with a thicker plastic bag costing at least 10 cents each.

“This bill has nothing to do with the environment,” said Gary Halvorsen, with Crown Poly bag manufacturer. “It’s a cash grab by corporate grocery shareholders and the whole thing is being helped along by Senator Padilla.” Halvorsen said if SB 270 passes, consumers will pay significantly more for the bags, and 2,000 bag industry workers, including his 300 coworkers, would be out of work.

“Do you want to live in a free society where the bag police cannot tell us what kind of bags we carry our groceries in?” Halvorsen asked?

Californians Against Waste, Poverty, Litter, but for the Environment

Californians Against Waste, and the Western Center on Law and Poverty were also at the rally handing out fliers in support of SB 270. Both groups claim because bags are littered, and they kill ocean marine life, SB 270 is needed. 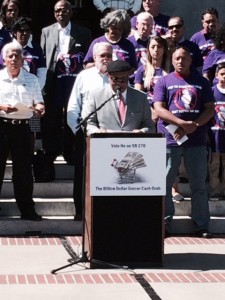 The Western Center on Law and Poverty appears to be having a difficult time choosing which issue is more important in this case. Ironically, they are supporting the bill to “establish a clear right of low-income Californians to be protected from replacement bag fees when they are unable to afford their basic needs.” This means they want an exemption in the bill for low-income and people eon public assistance, but still like the environmental aspect. The group said in a press release “At the end of the day, the plastic bag pollution harms poor communities at a higher proportion than wealthier ones” because of litter. They claim SB 270 will turn the tide on street and water pollution, and redirect litter abatement funding into community building forums.”

San Francisco’s ban on plastic bags did not provide the environmental results it expected. Anticipated environmental gains resulting from the ban were “nonexistent at best,” and the ban likely did more harm than good. Consumers just switched from single plastic to double paper bags; few consumers remembered reusable totes, which caused delays in checkout; and recycling bins were hard to find or nonexistent.

Rashied Yuille, a Crown Poly employee and Navy Veteran, said he’d had a difficult time finding a job until he landed at Crown Poly four years ago. “That’s why I don’t want to lose mine now,” Yuille said. “So I want to know why Senator Padilla is doing this, because if you are to take my job away, I want to know why.”

“Thanks to the fees on paper and thicker plastic bags, the grocers are going to make billions off SB 270, with not a single cent going to public purposes like the environmental programs, recycling initiatives, or beach clean ups,” said Alex Jimenez, a 45-year employee with E&A Paper and Plastic. “This is just killing a lot of jobs.”

Adrian Dove, Chairman of the Congress of Racial Equality had another view on how the poor would be impacted by SB 270. “It may not mean much to Senator Padilla, but people in my community use plastic bags to carry their groceries on the bus. This cash grab will kill jobs, hurt consumers, and hard working people trying to keep their heads above water.”

“People in my community are tired of paying 10 cents for a bag,” Dove said. “What’s next? Charging us for egg holders or milk cartons? This is poly thought public policy and a disgusting attempt to take from those who don’t have money and give more to those who already have it.” 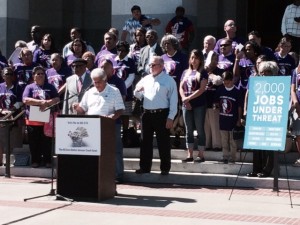 Plastic bags are not made of imported oil; they are made of ethane, which is a waste product extracted from domestically produced natural gas. If the ethane is not used to make plastic, it would need to be burned off, which would produce greenhouse gases. In addition to having many uses and being recyclable, plastic bags are an excellent use of a waste product.

Ironically, SB 270 bans the currently used recyclable plastic bags and replaces them with heavier plastic bags, five times thicker. It is unclear in this legislation how a significantly thicker plastic bag is better for the environment.

This is faux environmentalism, and it hurts one of the few remaining manufacturing industries left in the state.