The Lull of State Government Corruption, and Approval by the Legislature 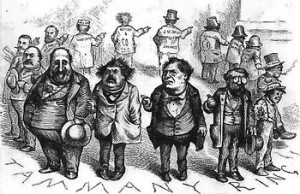 Tammany Ring by Thomas Nast; "Who stole the people's money?" / "'Twas him."

Brown should remember the old proverb, “People who live in glass houses shouldn’t throw stones.” There is likely far more malfeasance and graft in California state government than in the multinational investment banking firm; government bureaucrats are not elected, and accountable to no one, while Goldman Sachs is at least accountable to its shareholders and regulators.

I’ve written extensively about the well-documented state corruption at the Employment Development Department, State Parks Department, Fish and Game, Air Resources Board, Coastal Commission, CalFire, and this year, even in the State Senate.

Scandals and corruption appear to be standard operating procedure for government agency employees at the top. Why else would state lawmakers make it easier for unelected bureaucrats to pass laws and regulations?

Gatto decried the massive number of regulations passed by Governor-appointed, unelected bureaucrats. “By appointing people to these executive agencies and by telling them what to do, a governor or president can broadly dictate the day-to-day affairs of millions of Americans with almost no outward signs of wielding that power,” Gatto wrote. “And if a legislature dares to try to override some regulation, the governor or president can simply veto the bill. This is a serious imbalance of power.”

While Gatto is right about how the governor can legislate without going through the Legislature, he voted last week for expansion of the power of the unelected Coastal Commission, and three groundwater regulatory bills – clearly a case of the pot calling the kettle black.

Pot, meet kettle: The worst of the worst agency abuses

Any “disturbance” imposed on California’s coastal areas without a permit constitutes a violation of the Coastal Act.  Some violations: Sunbathing using a portable umbrella on your own private property above the public beach in Newport Beach; replacing rotten planks on a landing midway down a stairway to the beach; and obstructing the view of the coast in any way imaginable.

The Coastal Commission is the biggest nanny California has. But while the agency may be dressed as a nanny, it behaves like a bully.

Mary Nichols of the California Air Resources Board  covered up fraud by CARB employee, Hien Tran. In what turned out to be a mail order Ph.D., Hien T. Tran was found to have lied about having a Ph.D. in statistics from University of California, Davis. But even with full knowledge of Tran’s phony credentials, in December 2008, CARB went ahead with the diesel emissions rules based on Tran’s report.  Nichols claimed her intentions were good, and she and Hien Tran kept their jobs.

The CARB recently decided to place transportation fuels under its cap-and-trade program, with a focus on “the largest industrial emitters,” according to Nichols. Interestingly, in an op ed, Nichols recently explained the role of CARB as an unelected board of bureaucrats:

“The reason why California went with cap and trade as opposed to a (carbon) tax is very simply that the legislature delegated this program to the Air Resources Board,” Nichols said in a recent op ed. “As an agency of the administrative arm of government, we don’t have the power to adopt a tax. We do have the power to adopt a cap and trade program. So we chose that as the preferable way of pricing carbon.”

Consumers are facing significantly higher gas prices Jan. 1, under this new fuel regulation, passed by a board made up of unelected, unaccountable, bureaucrats.

The regulation is significant tax increase that will undoubtedly impact the working poor, and low-income families more. Many lawmakers tried to get this delayed for a year in a bill by Fresno Democratic Assemblyman Henry Perea, but in one of his last acts as Senate President, Sen. Darrell Steinberg unilaterally killed the bill without ever allowing a hearing.

If more evidence of the CARB’s overreach is necessary, the unelected board has taken over and passed regulations on windshield washer fluid, California’s smog check program, and runs “Clean truck month.” These issues sound innocuous enough, but not in the hands of the California Air Resources Board.

The 2012 scandal inside of the State Parks and Recreation Department was no surprise to anyone, but the levels of corruption, scheming and deceit, was.

The agency director, Ruth Coleman, resigned as she she tried to distance herself from a vacation buyout scheme, and the $54 million surplus hidden away in two accounts. As the parks department was making drastic cuts, threatening to close 70 state parks, and claiming to need to make $22 million in cuts, Coleman was accepting private donations to keep the parks open.

I wrote extensively about my state employee sources who said that Coleman’s fingerprints were all over the evidence. When the agency attorney, Ann Malcolm, resigned, as did Colemen’s special assistant, Jay Walsh, many believed more corruption would be uncovered.

But the media went home, and the former Parks employees quietly moved on.

Gov. Jerry Brown played down the scandal, glibly saying that it was the first time the government is in trouble for saving money.