Apparently the $7.1 billion Proposition 1 water bond is going to win easily on November 4. Politicians already feel comfortable about using the money as leverage to help their political allies.

One California state legislator is already telling local elected officials in his district that they must favor unions in bidding for contracts on a water project. If they don’t follow the directive, Governor Brown won’t give them the $12.5 million (or even $15 million) allegedly reserved for them in Prop 1.

On October 14, Assemblymember Luis Alejo (D-Watsonville) was scheduled on the meeting agenda of the Monterey County Board of Supervisors to make a presentation about his legislative accomplishments in 2014. Alejo and his staff had prepared a 25-minute presentation with handouts and PowerPoint slides. (Watch video of the presentation – Item #8 on October 14, 2014.)

Assemblyman Alejo received glowing praise from the Board of Supervisors for his work in the legislature. He told them that Governor Brown had signed 22 of his 23 bills that passed in the 2013-2014 legislative session. He gave special attention to one of those enacted bills, Assembly Bill 155.

Assembly Bill 155 authorizes the Monterey County Water Resources Agency to use an alternative bidding procedure called design-build for a planned $25 million “interlake tunnel” that would improve water storage by transferring water between two reservoirs. Design and construction are combined into one bid package, as opposed to the traditional procedure in which design and construction are bid separately. The contract is awarded to a company based on somewhat subjective criteria rather than to the lowest responsible bidder.

As the language of the bill was developed in May 2014, union lobbyists demanded that it include a requirement for the Monterey County Water Resources Agency to award the tunnel project with a condition that the winning contractor sign a Project Labor Agreement with unions. Assemblyman Alejo inserted this provision into his bill. AB 155 became the first California law to mandate a local government to sign a Project Labor Agreement. 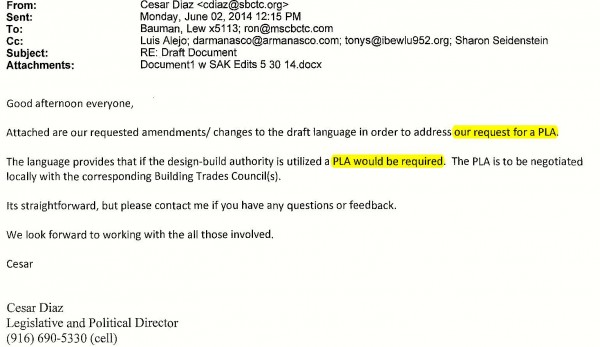 After Assemblyman Alejo added the union mandate, the board of the Monterey County Water Resources Agency and the members of the Salinas Valley Basin Management Plan Committee voted not to support the bill. AB 155 was out of their control – so much so that the top construction union official in Monterey County described it in an email as “our bill” even though it was originally the water agency’s bill.

Assemblyman Alejo told the Board of Supervisors on October 14 that Governor Brown was “very aware” of the controversy over the union mandate in AB 155 but signed it anyway. He also told the board that he won a commitment for $12.5 million from the water bond for the interlake tunnel project. (Go to 26:50 of video for AB 155 discussion.) He said he could get more Prop 1 money for them and at one point he even claimed to have a $15 million commitment from the Governor’s office. Several times he indicated a relationship between AB 155 and the funding commitment; for example, he emphasized that “the money wasn’t there” for the interlake tunnel project prior to the development of the bill.

After the presentation ended, Supervisor Jane Parker asked Assemblyman Alejo if state money for the project was dependent on the county adopting the design-build procedure authorized in AB 155 (with its Project Labor Agreement mandate). Assemblyman Alejo told the board of supervisors that the county had “both options” (design-build or design-bid-build) in how to bid the project. His answer seemed to suggest that the $12.5 million in funding from the state was NOT dependent on the county using the design-build procedure authorized in the union-backed bill. It was reported this way in an article in the October 15 Monterey County Herald, Interlake Tunnel Project in Line for State Water Bond Funding:

If state voters approve a water bond on the ballot next month, Monterey County would be in line for $12.5 million for the Interlake Tunnel water storage project, Assemblyman Luis Alejo said Tuesday. During a report to the Board of Supervisors, Alejo said the water bond funding was promised by Gov. Jerry Brown in connection with Alejo-sponsored legislation designed to fast-track the $25 million project. But he also acknowledged the county would get the money regardless of whether it used the design-build process outlined the legislation. “We pushed hard to get additional funding for this project,” said Alejo, a Watsonville Democrat.

Apparently Assemblyman Alejo was quick to clarify matters. On October 16, the Monterey County Herald reported that Assemblyman Alejo now insisted that the Monterey County Water Resources Agency must use design-build (with the Project Labor Agreement mandate) as a condition of getting the $12.5 million from the water bond. See Assemblymember Alejo: No Design-Build, No Interlake Tunnel Funding – Assemblymember Says Water Bond Money Conditional.

The article reported the following:

State Assemblymember Luis Alejo said Wednesday he would not support state water bond funding for Monterey County’s Interlake Tunnel project unless the county uses the design-build process outlined in state legislation he authored. Alejo, a Watsonville Democrat, told The Herald that he had “made it clear” to the Board of Supervisors on Tuesday he would not back allocating $12.5 million from the $7.54 billion bond on the November ballot if the county pursues a different course on the $25 million water storage project…Alejo’s AB 155, signed into law by Brown last month, would allow the Interlake Tunnel project to use one contractor to design and build the project, a move aimed at fast-tracking the project. But the legislation has drawn criticism for its inclusion of a project labor agreement…

The Herald reported that Alejo told the board the county had a choice about what process to pursue on the project in response to a question from Supervisor Jane Parker regarding whether the state water bond funding was conditional. Parker said Wednesday she thought Alejo had said the county could choose how it wished to proceed without affecting the funding promise.

Don’t be surprised. This is surely just the start of relentless efforts by special interest groups and their political allies to get the upper hand in controlling who gets the $7.12 billion that Proposition 1 will allow the state to borrow for water projects. 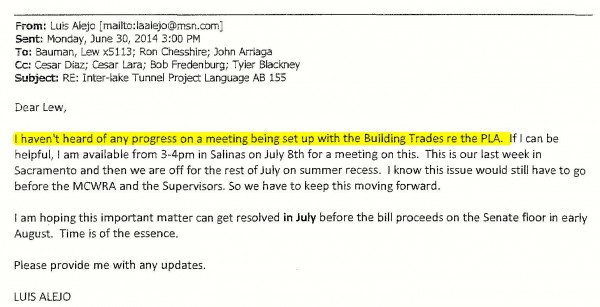