“At @UN_ClimateTalk in Lima, transforming the transportation sector is a big topic of discussion.” 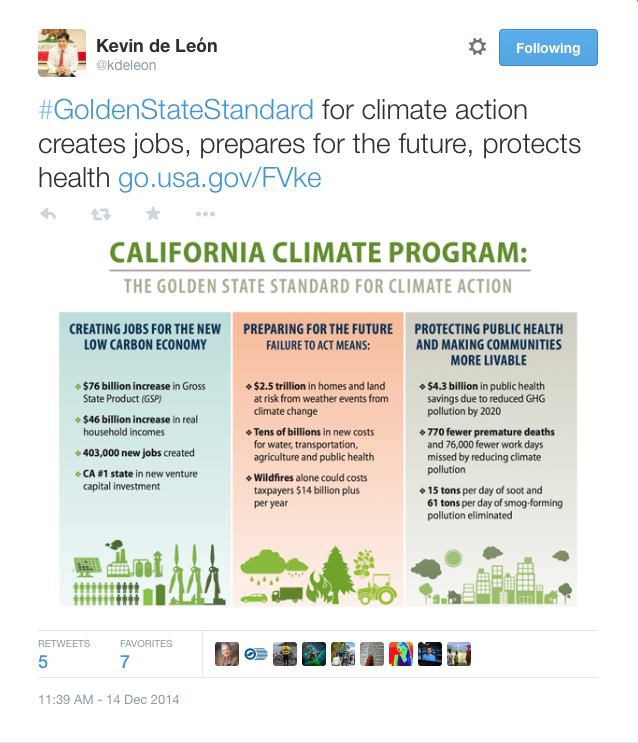 “California is driving the development of a green economy,” said De Leon in a press statement… as if that’s a good thing. De Leon called this development “a 21st century economy.”

“Our entrepreneurs have opened more green businesses, created more new jobs, and garnered more clean energy venture capital funding than those in any other state,” De Leon said. “We lead the nation in every clean technology category and green jobs are growing faster than any other industry. We can’t stop now.”

The problem with California’s Climate Program and “Golden state Standard for Climate Action,” is all of the data has been provided by the California Air Resources Board — an agency already discredited for using phony science and made-up data.

De Leon’s terminology made me delve deeper into this new “21st Century Economy.”

Essentially, California is the first state to implement a cap-and-trade system where we call business owners “polluters,” then bully them with cruel, harsh regulations, charge them exorbitant taxes, fees, and penalties, and then use that revenue to pay back political chits, set up deals for favored political allies, and shore up budget deficits.

The New Economy Coalition, which wants an economy “that is restorative to people, place, and planet,”and “shared prosperity and sustainability,” provided a clear definition of a 21st Century Economy: “The economic theory that was accepted as standard in the non-communist world during the second half of the twentieth century erects serious impediments to meeting the challenges of the twenty-first century.”  These impediments include “inappropriate goals” including standard economic theory which prizes wealth creation, and steadily growing GDP – “instead of focusing on what economies should really produce, which is human well-being…”

The New Economy Coalition also refutes “a bias toward monetary values: application of cost/benefit analysis or a focus on narrow measures of economic success often lead to an effort to apply monetary measures to human values, such as dignity, health, or fairness.  The focus on what can be submitted to the measure of money leads to an overemphasis on formal markets, and pays insufficient attention to essential unpaid economic activities.”

That’s what a 21st Century Economy looks like in California, a Democrat Party-owned state. “We can’t stop now.”

“We have one of the most ambitious renewable energy standards in the world requiring that one-third of our state’s electricity comes from clean energy resources,” says De Leon in a press statement. “We have shown how to put more fuel-efficient cars on the road and upgrade our schools to save on energy bills. We are investing in green infrastructure, including planting trees and building more parks in our neighborhoods. California is taking action to address our environmental problems, including droughts and wildfires.”

Here’s what De Leon is talking about: 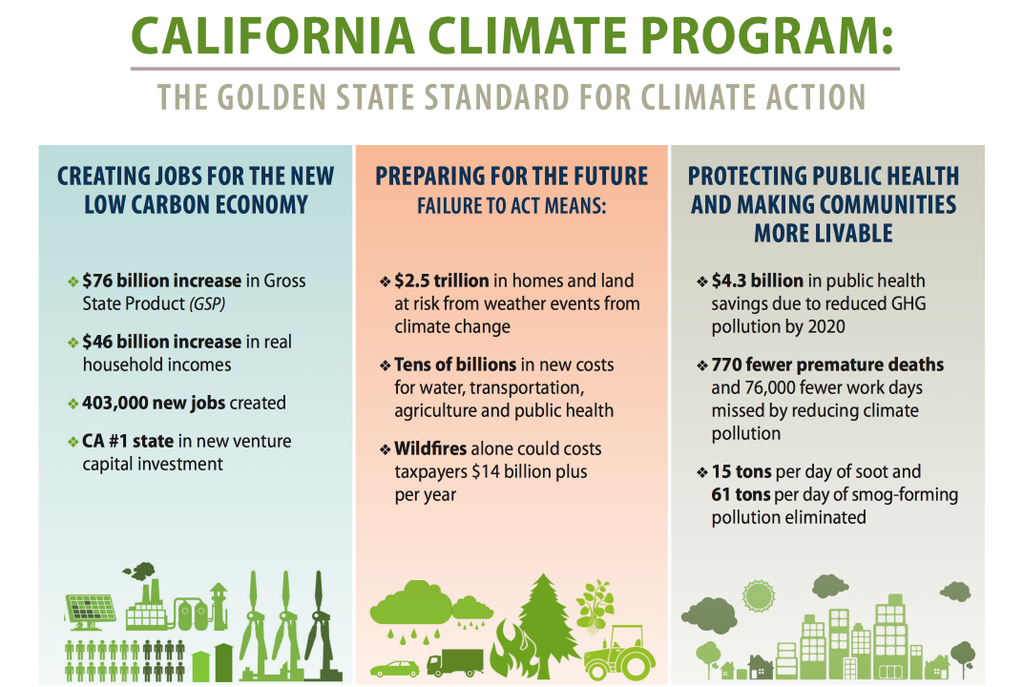 De Leon was a part of the California delegation attending the United Nations Climate Change Conference in Lima, Peru, where he signed an agreement with Quebec on Zero-Emission Vehicles.

“We have a long-standing partnership with Québec on climate policies, including linking our cap-and-trade programs earlier this year,” De Leon said. “California is also working with Washington, Oregon, several Northeast states, and the province of British Columbia on advanced vehicles.”

States don’t have the constitutional authority to sign agreements with foreign countries. But it’s done anyway.

“California’s international role yields benefits at home in helping us fight climate change and clean the air, and we can continue to share our leadership with the world,” De Leon opined.

The Heritage Foundation guide to the US Constitution claims there has been little litigation on the clause that prohibits states from entering into treaties.

But ARTICLE I, SECTION 10, CLAUSE 1 of the US Constitution makes very clear:

“No State shall enter into any Treaty, Alliance, or Confederation; grant Letters of Marque and Reprisal….”

Maybe someone will  file a lawsuit to negate the agreements between California and Quebec.

“In addition to granting the government powers to regulate trade and raise revenue that it either lacked or could not enforce under the Articles of Confederation, the Framers intended the Constitution to centralize much, if not all, power over foreign affairs,” the Heritage Foundation wrote. “Many of the federal government’s enumerated powers relate to foreign affairs and have corresponding restrictions on states in Article I, Section 10. Article VI of the Articles of Confederation had permitted the states to conclude treaties with foreign governments with the consent of Congress.”

Treaties, as well as alliances and confederations, are formal, binding agreements between nations that are the subjects of international law. “’Compacts and agreements’ are usually made by governmental officials, such as the executive, or by subsidiary governmental units, such as states or municipalities.”

California Air Resources Board Chairwoman Mary Nichols has entered into a trade agreement with Quebec in the Cap and Trade program.

In July 2012, I discovered Nichols had formed Western Climate Initiative Inc., a corporation created by California Air Resources Board to manage California’s cap and trade auctions.

The problem is that WCI Inc. was formed in Delaware, a state not subject to California’s open meeting or sunshine laws, leaving many questioning why CARB opted for such secrecy. The only reason to register the corporation in Delaware is the lack public or legislative scrutiny on any of their meetings or actions they take.

“Government Code 11120, the Bagley-Keene Open Meeting Act, is explicitly exempted in the language of budget trailer bill SB 1018. ”That was the final nail in the coffin of transparency,” a Capitol staffer commented.”

The ARB created the cap-and-trade program to auction off carbon allowances to California businesses, forcing businesses deemed “polluters” to pay billions of dollars just for the privilege of continuing to do business in California. The “cap” in cap-and-trade is the legal limit on the quantity of greenhouse gases a business can emit each year, and “trade” means that companies can swap or trade emission permits among each other.