We’re From the UFW and We’re Here To Help

The political left always talks about the importance of counting every vote, right up until they don’t want the result of that vote, as in the case of the workers at Gerawan Farming, Inc.

Despite chilly, foggy temperatures, Gerawan Farming workers traveled from California’s Central Valley, to the state Capitol last Thursday to hold yet another rally and meet with lawmakers. But it wasn’t your average worker rally – these farm workers want the Agricultural Labor Relations Board to count the workers’ votes from the November 2013 election to decertify the United Farm Workers union.

UFW founder Cesar Chavez must be rolling over in his grave.

The UFW is working with the ALRB to force the farm workers into a collective bargaining agreement that the thousands of workers don’t want. The United Farm Workers narrowly won an election to represent Gerawan Farming’s workers 24 years ago. But after only one bargaining session, and no contract in place, the union disappeared and wasn’t heard from for more than two decades.

In October of 2012, the union reappeared and insisted that a collective bargaining agreement covering Gerawan workers be reactivated, despite no union involvement with the workers for decades. The workers organized themselves and began the process to be able to vote to decertify the labor union. 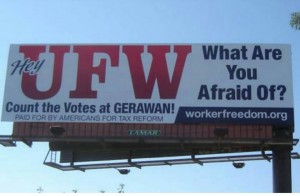 “We can think for ourselves; we don’t want your union,” says Silvia Lopez, the diminutive, but mighty leader of the workers. “We had an election on Nov. 5, 2013 — we fought a lot to have the election. We voted, but the votes haven’t been counted.”

In fact, Lopez and the workers gathered signatures two times to petition the ALRB, for an election to vote to decertify the UFW. But both times the California Agricultural Labor Relations Board sided with the UFW against the workers. The ALRB disqualified the petition drives, dubiously claiming many of the signatures were forged, and that workers turned them in late. But under pressure, the ALRB eventually reversed its decision, and the workers voted in the election to decertify the UFW in November 2013.

Not so fast… ALRB switched gears

However, after all of the ballots were in, the ALRB impounded them, refused to count them, and initiated legal proceedings against Gerawan Farming, Inc. Then, less than two weeks later, the ALRB adopted the unwanted collective bargaining agreement and Mandatory Mediation, and the UFW filed an enforcement action to force Gerawan to comply.

Silvia Lopez and her co-workers filed a class-action lawsuit against the ALRB for refusing to count the ballots. Gerawan Farms filed suit against the ALRB, alleging that mandatory mediation is unconstitutional. The UFW continues to call for a contract to be imposed. And both the ALRB and the UFW allege that Gerawan Farming has engaged in unfair labor practices.

“The main problem is in the ALRB office,” said Lopez. “They are supposed to be neutral with us. But they are not. We can see that they are favoring the UFW.”

UFW Goon Is Back

At a 2013 rally at the Capitol, a top UFW official grabbed Lopez by the wrist and twisted, demanding to know who paid for the buses for their trip. Lopez said he hurt her, and she thought about pressing charges, “but I was too busy that day.” At the rally last week, Lopez saw the same UFW goon, Marc Grossman, and gave him an earful. 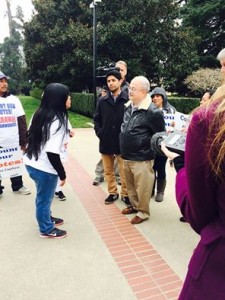 Grossman, a longtime Cesar Chavez press secretary and UFW staffer, was at the rally last week along with Chavez’s grandson, Anthony Chavez. Lopez said she recognized Grossman from the 2013 rally when he grabbed her wrist.

“I don’t need you to tell me what I need,” Silvia told Grossman at the rally. “We’re not the ones who voted for that contract 20 years ago.”

Grossman said Gerawan owes millions of dollars in back wages to his farm workers, and told Lopez the millions in back wages “is the real reason he is orchestrating all of these rallies.” (youtube video here)

“Why doesn’t Dan (Gerawan) want to share some of his money?” Grossman asked Lopez. The crowd boo’d Grossman.

“Why won’t they count our votes?” Lopez asked Grossman, referring to the ALRB.

“There’s not a scintilla of evidence that the Agricultural Labor Relations Board is biased,” Grossman said. The crowd jeered Grossman.

“Why do you want to take workers’ money away?’ Lopez asked Grossman and Chavez. “Go earn your own money. Go out and work like we do, and like Dan Gerawan does.”

Lopez leaned toward Grossman and said, “We are not stupid and know what we want. And we are going to get what we want, and not what you want.”

“You’ve been listening to Dan Gerawan too much,” Grossman said dismissively.

Legislature and Governor — Silence is deafening

Assemblywoman Shannon Grove, R-Bakersfield, and Assemblyman Jim Patterson, R-Fresno, are also angry and frustrated. Grove and Patterson are the only lawmakers who have done anything to assist the Gerawan workers. 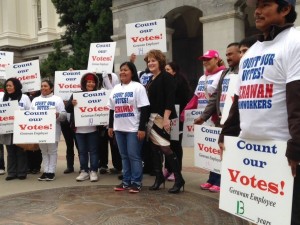 “The workers have been entirely ignored by the very people and political leaders supposed to be representing them,” Patterson told me. “The ALRB is a rogue agency now, entirely biased and out of control.”

Patterson has urged Brown to intervene with the ALRB. “It is the governor’s responsibility,” Patterson said. “He authored and signed the enabling legislation. It’s an absolute obligation to meet with these people. They have the right to vote.”

Patterson said he would work toward legislation reining in the rogue ALRB. “They cannot treat people like this,” he added. “I’m just amazed the governor has not intervened.”

Patterson said he was equally frustrated at the silence of Assembly colleagues who represent the Central Valley. “I’ve reached out to Assembly Democrats Henry Perea and Rudy Salas on a number of occasions,” he said. “The silence is deafening.” 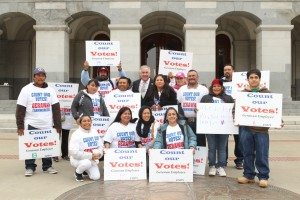 “This is what one-party rule looks like,” Patterson said. “And it’s an abuse of power.”

“The Agriculture Labor Relations Board has refused to count their ballots which overwhelming oppose joining the United Farm Workers,” Grove posted on Facebook following the rally last week. “This is a vicious circle. The ALRB is only in existence if the UFW survives, but the UFW can not survive without union dues. When these farm workers win and get back their rights from this oppressive union, there will no longer be a need for this abusive state agency.”