Do Hispanics Thrive in Texas, and Not in California?

Is it true “Latinos remain hard to find on the councils of city and county governments throughout the state,” as Sacramento Bee columnist Marcus Breton says? Given that the California Legislature is fed by city and county governments, it is notable that the Legislative Latino Caucus has 22 members – all Democrats — out of 140 total California legislators. Even more notable, the Democrats won’t let the only Latino Republican, Assemblyman Rocky Chavez, join the caucus. 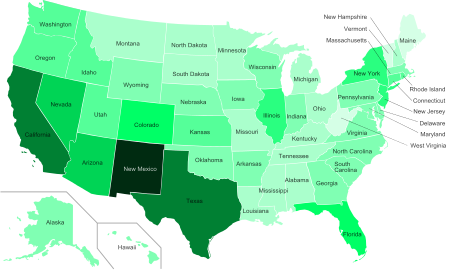 List of U.S. states by Hispanic and Latino population

Rather than bemoan the numbers of Hispanics in government, Breton should have identified the real source of the problem: California.

Hispanics thrive more in Texas than in California. Why?

“Hispanics enjoy much better statistics across the board in the Lone Star State than in the Golden one,” according to Mike Gonzalez with the Heritage Foundation. “The relative advantage that Hispanic Texans have in key cultural indicators is strongly related to the state’s dynamic economic growth and small government. But because Texas’ smaller government has allowed civil society to grow organically.”

Hispanics are allowed to be entrepreneurial in Texas, and not in California, where the regulatory environment, permitting and licensing, and high tax structure kills business, and especially attempts to start up a business.

In Texas, 57 percent of the Hispanic population are business owners. In California, it is only 45 percent.

Hispanics in Texas are much more likely to own their own homes, than Hispanics in California (56.8 percent to 42.9 percent), according to Gonzalez.

“The educational gap between Hispanics and non-Hispanic white students is much smaller in Texas than in California, where it is statistically significantly higher than it is in the rest of the nation,” Gonzalez found. “The fourth-grade mathematics gap for Texas was 20 points, below the national average; in California it was 28 points. For the eighth grade, the Texas gap was 24, compared with California’s 33. In reading comprehension, the fourth-grade Texas gap was 22 and California’s was 31, and for eighth-graders, Texas’s gap was 22 and California’s was 28.

“In all four measures, Texas outperformed the rest of the nation; California was either the worst performer or among the worst.”

Welfare Is Big Business in The Golden State

California not only has the highest number of welfare recipients in the nation, the state is the only one in double digits. New York, which has the second-largest percentage of active welfare cases in the country, has only 7 percent of the nation’s welfare caseload.

“There are 8.9 million people in poverty in California,” said Mike Madrid, an expert on Latino policy and political trends, in the Sacramento Bee column. “Those numbers are disproportionately Latino. (Because of that) the success of Latinos and the success of California are intertwined.”

Even more important, in both California and Texas, nonwhite Hispanics make up 38 percent of the population. And both are “majority-minority” states, where no one group has an outright majority. In California, Hispanics became the largest group earlier last year.

Gonzalez explained while both California and Texas were settled by Spain and were briefly part of Mexico after its independence from Madrid in 1821, the pre-existing Mexican populations in the two states were very different. Texas’ original Mexican population was large, estimated between 15 percent and 25 percent of the new state — as many as 50,000 “Tejanos.”

“By contrast, California’s Mexican population was small when Mexico ceded the state — maybe around 10,000 when it entered the Union in 1850. These “Californios” were swiftly overwhelmed by the hundreds of thousands who flocked to the state starting with the Gold Rush of 1848.”

“At the other end stands California’s model of large transfer payments, putting significant portions of the population on the dole, and more divisive identity politics.

“The results are bare for everyone to see. All in all, they make the Lone Star State a golden one for Hispanics.”

Breton demonstrated he is aware of a problem, but misses the mark on the fix: Hispanics should be Republicans. It’s going to take big policy changes, including free market principles, to really help the Hispanic culture — which the Democratic Party has claimed entitlement to since California’s first governor in 1849.