Brown Administration Tied To Scandal That Took Down Oregon Governor

Corruption and scandal resulting in the recent resignation of Democratic Oregon Gov. John Kitzhaber, appears to be just the tip of a very big iceberg. The ho-hum media coverage of the story made it sound like just another unscrupulous governor and first lady. But the Kitzhaber scandal has evolved into much more — multiple governors and high-level staff involved in shady green energy deals, with national entanglements. 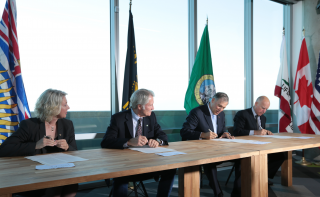 The Art of the Deal

Emails from 2013 and 2014 reveal Kitzhaber agreed to a deal with the governors of California and Washington, to implement low-carbon fuel standards and develop a scheme to foist green-energy agendas on multiple states.

Oregon’s “first lady” Cylvia Hayes played a key role in pushing the progressive climate policies of her fiance, Kitzhaber, in exchange for consulting contracts and funding from people involved in energy and environmental policy.

June 30, 2008, the leaders of Alaska, British Columbia, California, Oregon, and Washington signed the Pacific Coast Collaborative Agreement, amounting to a ‘compact,’ which is prohibited between states without Congressional approval.

And this isn’t the first such compact; the California Air Resources Board, a state agency, entered into a compact with Québec to carbon trade. The Air Resources Board original plan was to create a giant climate change coalition with other states and provinces from which carbon trading and taxing would emanate. But one by one, states dropped out, citing the difficult economy and cost to manage such a program. California instead “linked” with Québec for cap and trade carbon auctions.

In October 2013, California Gov. Jerry Brown, together with the Governors of Oregon and Washington and the British Columbia Premier, signed the Pacific Coast Action Plan on Climate and Energy, “to align climate change policies and promote clean energy.” The Pacific Coast Collaborative links with the West Coast Infrastructure Exchange (WCX), a compact between California, Oregon, Washington and British Columbia, formed  in 2013 to promote “the type of new thinking necessary to solve the West Coast’s infrastructure crisis.” And the WCX is linked to the Clinton Foundation’s Clinton Global Initiative.

“California isn’t waiting for the rest of the world before it takes action on climate change,” said Gov. Brown. “Today, California, Oregon, Washington and British Columbia are all joining together to reduce greenhouse gases.” 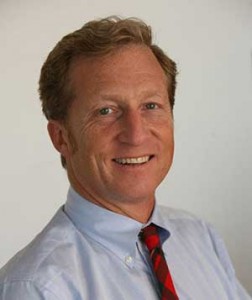 In September, Chris Horner, the Senior Legal Fellow with Energy & Environment Legal Institute, obtained an 11-page email thread under Washington State’s freedom of information law, which showed how Kitzhaber’s office organized a campaign to promote the green agenda, beginning with the California and Washington governors’ offices, a private environmentalist law firm, and the White House.

This scheme was made possible with funding from “major environmental donors,” billionaires Tom Steyer and former New York Mayor Michael Bloomberg, according to Horner.

Throughout the 11 pages of emails, hedge fund billionaire Tom Steyer is named. (The email thread is HERE)

“If your Governors buy into such an agreement, we would have six weeks to attract a critical mass of other Governors to sign,” wrote Gov. Jerry Brown aid Wade Crowfoot. “We could likely get some of the East Coast Governors and IL Gov. Quinn on board and moving forward have an open invite for other Governors to join the agreement.”

Crowfoot continued: “…this could be a powerful symbol of growing subnational momentum for climate change… even joining forces with the Steyer people if that makes sense.”

Steyer has said he’s willing to “spend what it takes” to implement climate change policies that are already driving up California’s gas prices –by some estimates of at least 15 cents a gallon. Steyer, a well-known environmental extremist, even wants to penalize people who contribute to global warming. 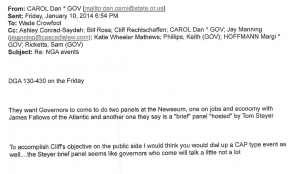 In the email thread, Sam Rickets, a senior aid to Washington Gov. Jay Inslee, said their office was working on another governors’ agreement similar to the 2013 Pacific Coast Collaborative, aimed at getting multiple governors to sign it, “to spread the collaboration to other parts of the country.”

“Cliff and I developed an agreement that we think is general enough to attract broad support but provides a solid base to grow from,” Rickets said, referring to Cliff Rechtschaffen in Gov. Brown’s office. 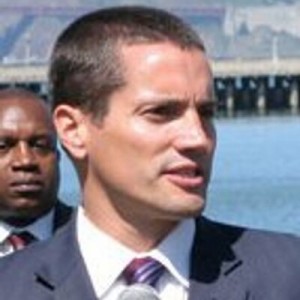 Wade Crowfoot serves as Deputy Director of Governor Brown’s Office of Planning and Research and as the Governor’s Military Advisor. “Mr. Crowfoot is working to advance the Governor’s ambitious renewable energy goals and ensure strong land use planning throughout the state,” his bio says. Crowfoot was west coast regional director for the Environmental Defense Fund from 2009 to 2011, and served as environmental advisor and director of governmental affairs for San Francisco Mayor Gavin Newsom from 2004 to 2009, and worked for the San Francisco Board of Supervisors from 2000 to 2003.

Clifford Rechtschaffen is a senior advisor in Brown’s office, responsible for energy, environmental and agricultural issues. Prior to being appointed by Brown, he was a special assistant attorney general from 2007 to 2010 for then-Attorney General Jerry Brown, where he helped “coordinate the work of the office’s attorneys on global warming, including special projects and liaison with outside groups,” according to his bio. 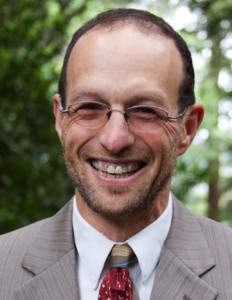 He was also known as the top enforcer of California’s toxics initiative, Proposition 65.

Ashley Conrad-Saydah was appointed by Governor Brown Jr. in April 2012 to serve as Deputy Secretary for Climate Policy at the California Environmental Protection Agency, according to her EPA bio.

Prior to joining CalEPA, Ashley served as California’s Renewable Energy Program Manager for the United States Department of Interior, Bureau of Land Management. In that position, she helped to establish and advance key state-federal partnerships, engaged stakeholders in determining the best places for the development of utility-scale solar, wind, and transmission and drafted and instituted national monitoring and mitigation policies for renewable-energy development on public lands. Ashley began her tenure with the BLM as a Presidential Management Fellow, completing a half-year detail with the U.S. Department of Energy.

It’s obvious that all of these high-level appointees are linked in a collaborative association, on environmental and climate change policy.

Part ll – Who is Driving This High-Speed Bus To ?