UPDATED: March 13, 2015 to include a photo of the $8 million piece of art from a Sacramento city staff report – a public record. 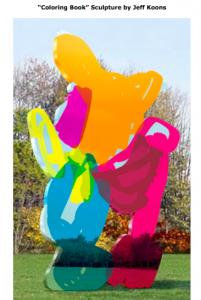 While this may appear to be a local news story from the wayward Sacramento City Council, it is an example of callous, tone-deaf local government, and symptomatic of state government.

As the Sacramento City Council voted 7-0 Tuesday evening to approve a public contract with a New York artist for an $8 million piece of art, Sacramento Mayor Kevin Johnson called it “a good investment for our community.” 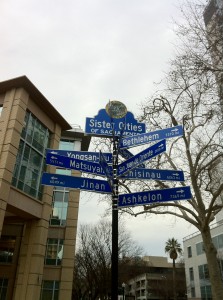 High-end art is one of the most manipulated markets in the world. But that didn’t stop the Sacramento Mayor: “This guy is world renowned, he is one of the most amazing artists ever,” Mayor Johnson said of artist Jeff Koons, explaining that this art purchase will really put Sacramento on the map as “a world-class city.”

In one of the most ludicrous statements I’ve ever heard from an elected official, this is what politics has become. The deal was done before the deal was done, despite the 240 people in attendance at the council meeting who wanted to voice an opinion.

The $8 million sculpture is slated to decorate the new publicly subsidized NBA arena for the Sacramento Kings, but will be owned by the City.

Johnson has been bucking for a “world class” arena and city since he was first elected Mayor in 2008, apparently embarrassed by the capitol of California.

The taxpayer subsidy was shoved down city taxpayers throats by Johnson for this downtown vanity arena project, without a vote on the $334 million arena subsidy by city taxpayers. The total cost of the arena is slated at $477 million. The City of Sacramento grossly understated the total public contribution to the arena, according to Sacramento public policy think tank Eye on Sacramento. Instead of contributing $258 million,  city taxpayers will more likely be contributing $334 million to the project. This represents not 58 percent of the project cost as claimed by the city, but 75 percent of the project’s cost  — and this doesn’t account for subsidies provided by county government, or future undetermined traffic infrastructure costs.

While most Sacramento area residents like the idea of a more modern new sports arena, voters have twice rebuked Johnson’s public subsidy — so instead, Johnson and the Sacramento City Council concocted another way to pass it.

This isn’t our first rodeo

There have been numerous attempts to gain city approval for a new, publicly subsidized arena over the past decade. Sacramento voters turned down two ballot measures in 2006 that would have approved a public subsidy through a ¼-cent sales tax. And Johnson and his thought leaders prevented another measure from reaching the ballot so voters could weigh in on it again.

In 2011, Johnson formed an “independent” non-profit group to develop the new arena. The “Think Big Sacramento” group conducted a bold public relations campaign to push the publicly subsidized arena plan. But Johnson’s group turned out to be so closely linked to the Sacramento Kings organization, the Fair Political Practices Commission fined him $37,500 for his failure to report more than $3.5 million in “behest” payments from the Kings. According to the FPPC, “[T]hese payments are not considered campaign contributions or gifts, but are payments made at the ‘behest’ of elected officials to be used for legislative, governmental or charitable purposes.”

“Have government subsidies sparked the creation of any prominent new art, reintroduced the best of historically validated art to new generations with lasting impact, acculturated immigrants to the best of Western thought, ideals, and talent, or led to anything remotely resembling the equivalent of Italy’s fifteenth-century Rinascimento? Whither art without my tax dollars?” asks the Freeman Foundation.

Local artists were appalled by the New York purchase and suggestion that Sacramento does not have artists capable of creating a $8 million dollar piece of art for the arena. To soothe artists’ tempers and hurt feelings, the city council committed $1.5 million to local art for the arena.

“We do have the artists that are here who are very capable to do a project of that stature,” said Barbara Range of the Brickhouse Gallery in Oak Park. 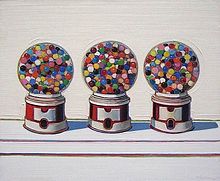 Local artists have every right to be angry; Sacramento isn’t starving for good local artists, and has many famous artists: Wayne Thiebaud, Gregory Kondos, Jerry Silva, Troy Dalton, Paula Wenzl, Jose Montoya, and Larry Welden are just a few of the famous and talented artists from the region.

“We have a rare opportunity for Sacramento to snare an extremely important piece of art by an internationally-acclaimed artist,” local philanthropist Marcy Friedman said, as reported by the Sacramento Bee. “It’s destined to become the most photographed image in Sacramento history.”

“Because art is many things to many different people, how can government-funded agencies hope to anticipate the aesthetics of a wide-ranging, diverse population?” the Freeman Foundation asked.

The Art of the Deal

According to the Bee, the art of the deal is:

Friedman is donating $1 million to the local art fund at the arena; the Kings and the city have agreed to contribute $250,000 apiece. That spending is by far the single largest donation to local public art in city history.

The council voted to approve a contract to purchase the Koons sculpture for $7.5 million from the artist and his gallery. Another $500,000 would be spent on shipping and maintenance for the artwork. The purchase is part of the city’s Art in Public Places program that requires 2 percent of construction budgets of public projects to be spent on art.

Under the terms of the contract, $2.5 million would come from revenue bonds the city plans to issue for its contribution to the arena. The Kings have committed another $2.5 million for the art purchase; team chairman Vivek Ranadive and team minority owners Oates and Kevin Nagle would donate an additional $1 million apiece.

The Freeman Foundation summed it up best: “In between the snobs and the avant garde are the cherry pickers, the multitude who have no trouble bouncing from Mozart and Mahler to Berry Gordy and the Beatles… It’s feeding time again, and artists and cultural groups are lining up at the trough.”