Major changes are being proposed to the California History-Social Science Curriculum “Frameworks” through an administrative process that is getting no attention. 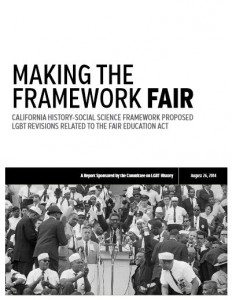 The California Department of Education has been reviewing recommended edits to California History and Social Science frameworks from Lesbian Gay Bisexual and Transgender special interest groups, following passage of Senate Bill 48, by Sen. Mark Leno, and Assemblyman Tom Ammiano, both of San Francisco, in 2011.

California public school students will now be required to compare the importance of  “the forced repatriation of Mexicans and Mexican Americans to Mexico that took place during the Great Depression, the forcible removal and internment of Japanese Americans during World War II, and the work of California activists like Harvey Milk to promote civil rights.”

SB 48 requires all social science curriculum in California public K-12 schools, including history books and other instructional materials, to teach children as young as five, to accept and endorse transgenderism, bisexuality, and homosexuality.  Only positive images of homosexuals are permitted, and new textbooks are being written to follow these guidelines.

Signed into law by Gov. Jerry Brown, SB 48 added language to California Education Code Section 51204.5, requiring curriculum to include the contributions of lesbian, gay, bisexual, and transgender Americans in the history of California and the United States, “with particular emphasis on portraying the role of these groups in contemporary society.”

SB 48 also prohibits any school material or instruction that reflects adversely on homosexuality, bisexuality or transgenderism.  And, the law even prohibits parents from removing children from classes over offensive material.

To appease opponents, the California Department of Education initially said the state’s financial crisis would preclude the purchase of new LGBT positive textbooks for several years. But that day is here.

Not surprisingly, sponsors of SB 48 were Equality California, and the Gay-Straight Alliance Network, two of the most vocal LGBT special interest groups in the state, and almost permanent fixtures in legislative committee rooms at the Capitol.

The fundamental curriculum changes are a result of a report published August 2014, sponsored by the Committee on LGBT History, funded by an “anonymous” donation through the Gay-Straight Alliance Network. But the report offers a “Special thanks to Carolyn Laub, former and founding Executive Director of Gay-Straight Alliance Network and Judy Appel, Executive Director of Our Family Coalition.”

In some schools, children are already taught that people can have more than one gender or no gender at all. In 2013, the California Department of Education updated its list of recommended reading for K-12 students. “To wit, young children can learn about  gay rights activist Harvey Milk through an activity book, while older students have books like I Am J — a novel about transgender teens — and Totally Joe — about a boy coming out,” Queerity.com reported. “Predictably, conservatives think California is trying to indoctrinate their children and turn them all kinds of gay.”

While many parents object to age-inappropriateness of the curriculum, others say specifically adding LBGT-specific curriculum is forcing a way of thinking on children without regard for religious beliefs, morals and values of many families, including most immigrant families.

One proposed change compares the forcible removal and internment of Japanese Americans during World War ll, and the life of gay activist Harvey Milk.

Another calls on teachers to recognize and reflect the experiences of people with disabilities, and LGBT persons.

Another section requires a parallel discussion between the “Red Scare” with the “Lavender Scare.”

In the public comments section of the CA Department of Education Frameworks, John Briggs, a University professor, said, “There is no mention in that section of the American Civil War and the Civil War period as an era of its own.  Those topics are taken up, among many others, in the elective curricula, but they are absent from the framework’s listing of conceptual and topical priorities.  (Something similar might be said about the American founding.)  The Frameworks’ focus on broad nineteenth-century social movements in America displaces the most consequential era in American history — an era that is consequential because it sums up, tests, and projects the meaning of the American experiment in self-government.  How can one study American history and hence American identity without featuring these things?” (public comments can be downloaded here: Attachment 5 – Index of Additional Public Comments Received)

Briggs added, “the omission of the American Civil War from the list of the ordering periods of American history.  Its role as one of the few truly defining moments in American history is not on the playbill. It will no doubt be mentioned, but any deeper study of the topic will be optional.  This would be a great loss.”

Another teacher, Richard Vanden Bosch, also weighed in: “They call on teachers to recognize that the history of the community, state, region, nation, and world must reflect the experiences of men and women; lesbian, gay, bisexual, and transgender individuals; persons with disabilities; and members of different racial, religious, and ethnic groups. I believe hetereosexual was left out, but the sexual orientation of any historical figure is not as important as the substance of what they have accomplished.  George Washington’s accomplishments are not as a heterosexual man, but as a political and military leader.”